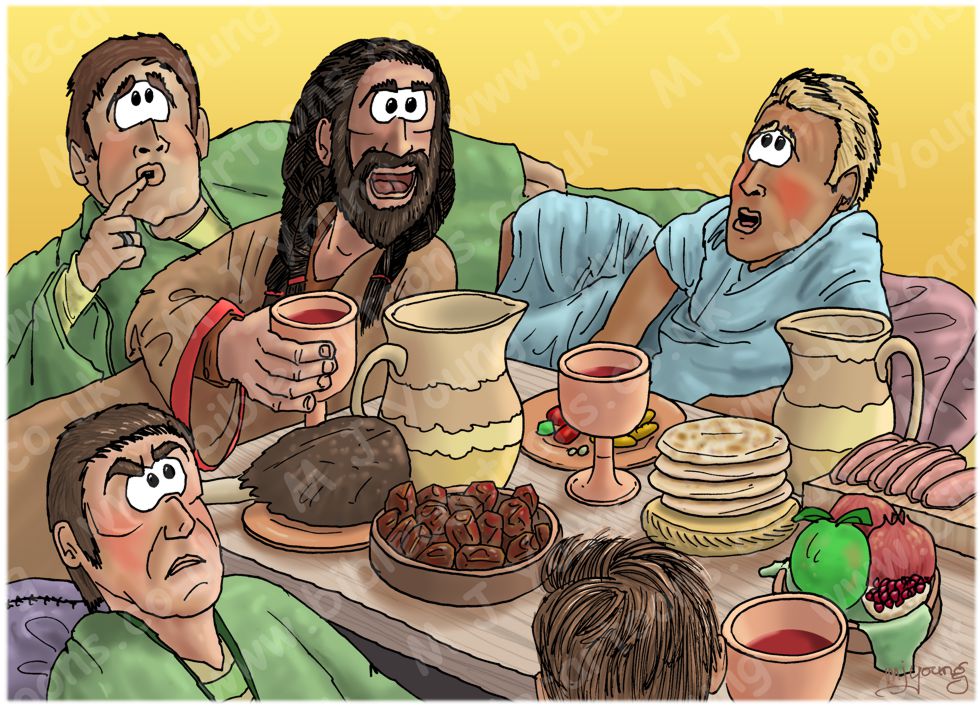 Judges 14:10-14 (ANIV)
10 Now his father went down to see the woman. And Samson made a feast there, as was customary for bridegrooms. 11 When he appeared, he was given thirty companions.
12 “Let me tell you a riddle,” Samson said to them. “If you can give me the answer within the seven days of the feast, I will give you thirty linen garments and thirty sets of clothes. 13 If you can’t tell me the answer, you must give me thirty linen garments and thirty sets of clothes.”
“Tell us your riddle,” they said. “Let’s hear it.”

For three days they could not give the answer.

TIME OF DAY:
The Bible doesn’t specify the time of day for this particular scene.

LIGHTING NOTES:
The scene is inside a house, there are unseen oil lamps lighting the scene from the right, casting shadows to the left of people and objects.

CHARACTERS PRESENT:
Samson (reclining on the left; he’s the man with long, dark, braided hair), and four of the thirty companions mentioned in verse 11.

RESEARCH/ADDITIONAL NOTES:
This scene shows Samson relining at a banquet table, taking part in the seven days celebration of his intended marriage. Samson is wearing his usual brown and red robes, and notice he is the only man wearing a beard, and has long, dark, braided hair.

Reclining around the table are four Philistine guests. Samson is just speaking his riddle to them. I have given him a facial expression that tries to show a sense of cunning, and hardness. He is deliberately trying to provoke the Philistines! Notice the various expressions on the Philistine men’s faces too: puzzlement, thoughtfulness, etc, as they try to work out the riddle. Notice also the man in the bottom right of the scene, he is angry, irritated and/or affronted… no doubt he is one of the ones who threaten Samson’s fiancee in the following scene!

I enjoyed drawing and colouring up the food and drink on the table: the red wine in it’s ceramic cups and jugs, the fruit (apples, pomegranates (bottom, right), the flat breads on a wooden platter, the leg of meat on a plate, & the dates in a dish.