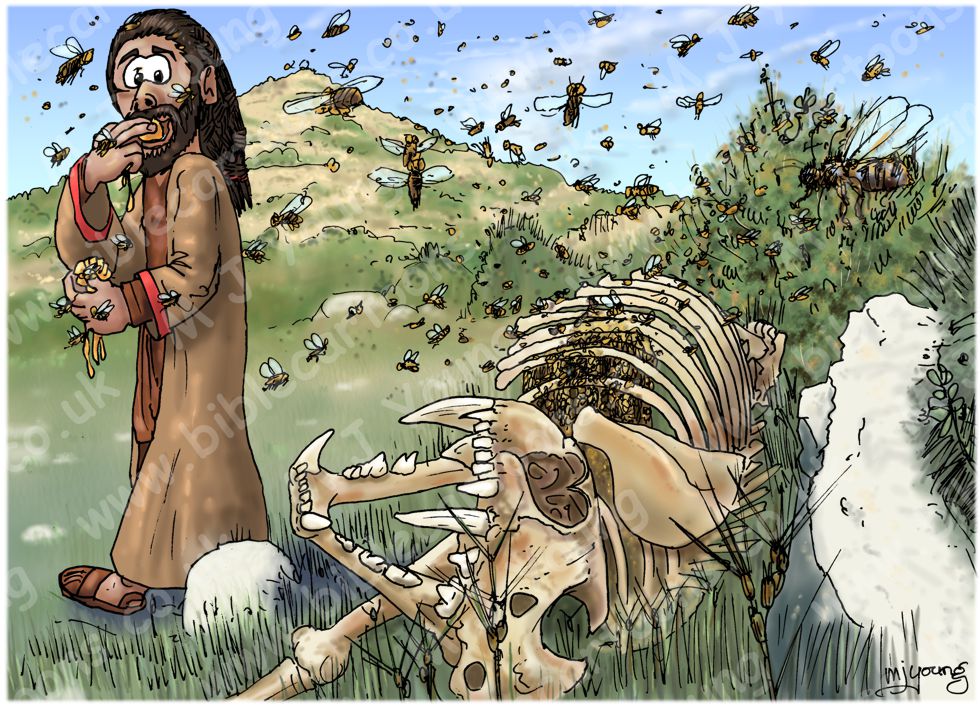 Judges 14:7-9 (ANIV)
7 Then he went down and talked with the woman, and he liked her.
8 Some time later, when he went back to marry her, he turned aside to look at the lion’s carcass. In it was a swarm of bees and some honey, 9 which he scooped out with his hands and ate as he went along. When he rejoined his parents, he gave them some, and they too ate it. But he did not tell them that he had taken the honey from the lion’s carcass.

TIME OF DAY:
The Bible doesn’t specify the time of day. I’ve set this scene in the mid morning.

LIGHTING NOTES:
The sun is high in the sky (to the left), casting shadows to the right.

RESEARCH/ADDITIONAL NOTES:
Samson probably walked along the Sorek valley, from his parent’s home in Zorah, to Timnah. The Sorek Valley is an impressive wadis that allows rainwater from the higher, Judean Central Hills to run westward down to the Mediterranean Sea. A wadis is a valley which is dry for most of the year, but which can suddenly flood with heavy rainwater in the rainy season. The Sorek Valley was significant in Biblical times as a means of connecting the lowland coastal regions (dominated & controlled by the Philistines) with the highlands of the Judean Mountain region, (controlled by the Israelites).

Looking at the geological map and photographs from the internet, I can see that the area Samson would have walked is mainly composed of chalk & chert (the Adulam and/or Taqiye Formations), which is why the rocks in my scene are light coloured.

Animals in this scene
Israel has about 1100 different species of bees. The ones I have drawn are Apis mellifera syriaca (aka Syrian honey bee).

The skeleton in the foreground is a Panthera leo leo (aka the Asiatic lion).

“The Asiatic lion used to occur in Arabia, Palestine, Mesopotamia and Baluchistan. In South Caucasia, it was known since the Holocene and became extinct in the 10th century. Until the middle of the 19th century, it survived in regions adjoining Mesopotamia and Syria, and was still sighted in the upper reaches of the Euphrates River in the early 1870s. By the late 19th century, the Asiatic lion had become extinct in Saudi Arabia and Turkey.644 The last known lion in Iraq was killed on the lower Tigris in 1918.”
[Source: https://en.wikipedia.org/wiki/Asiatic_lion]

Plants in this scene
In the foreground you may notice some spiny grass. This is Aegilops peregrina (Aegilops peregrina (Hack.) Maire & Weiller), (aka one of many varieties of Goatgrass), which is a typical plant of Batha, Phrygana ecoregions (shrubland), such as the part of Israel that Samson lived in.