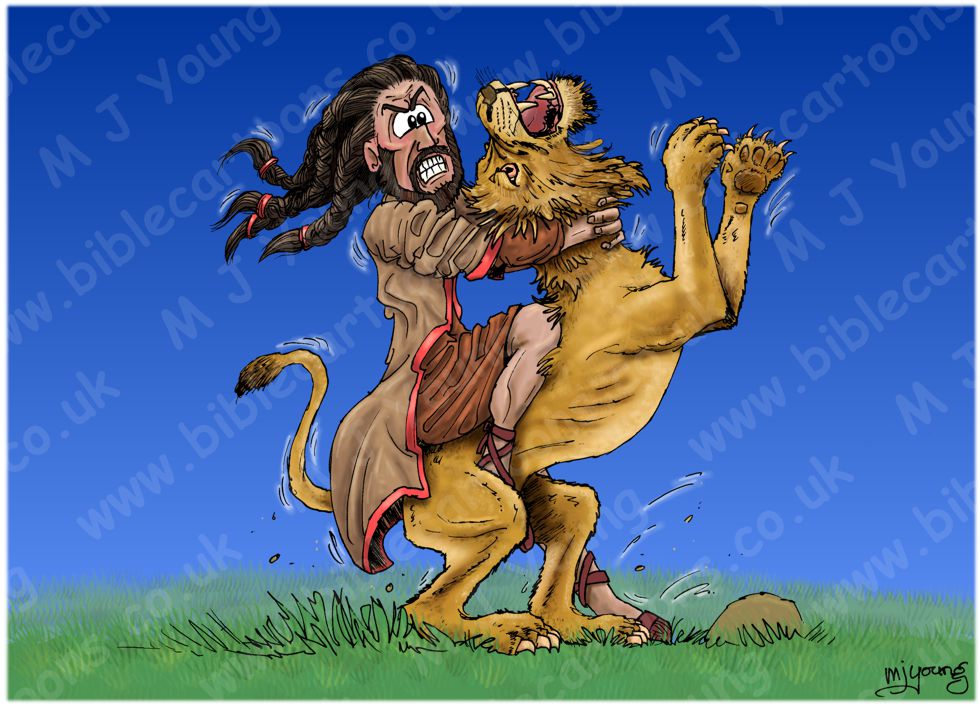 Judges 14:5-6 (ANIV)
[5 Samson went down to Timnah together with his father and mother. As they approached the vineyards of Timnah, suddenly a young lion came roaring towards him.] 6 The Spirit of the Lord came upon him in power so that he tore the lion apart with his bare hands as he might have torn a young goat. But he told neither his father nor his mother what he had done.

LIGHTING NOTES:
There is sunlight used in this scene, coming from above & to the right

RESEARCH/ADDITIONAL NOTES:
This design was originally drawn for a “Bad Day” mug. I like the simplicity of the scene, in that the background, grass & ground is very uncomplicated, helping to focus the viewers attention solely on the struggle between Samson & the lion.


Bible Doctrine Notes
14:6,19 HOLY SPIRIT, Leaders (1.33E)
The Holy Spirit gave Samson supernatural human strength, which also acted to confirm God’s call for the young man. Since Samson used his strength to kill a young lion it is sometimes suggested by commentators that Samson did not always use his gift with wisdom, or great moral purpose. Samson’s actions do not seem to provide a prime moral example for us. It could be argued that in some ways he wasted his gift, yet he defeated the Philistines (the current foreign threat to the Israelites) and protected his own people. By using his gift to help his own people Samson’s actions did provide a strong moral purpose for them. The gifts the Holy Spirit brings are always given to benefit the people of God. This fact was true to Samson’s strength, Bezalel’s artistic ability (see Exodus 35:30-31), or Joshua’s leadership (see Deuteronomy 34:9).

14:6 MIRACLE, Nature (2.23A)
God’s miracle-workers may not always be our best examples in other areas of life. From conception onwards (Judges 13:3) Samson’s life was marked by miracles. Although commentators may point to his diet as the source of his strength (See Judges 13:5-7, Numbers 6:1-4), the Bible clearly states that in fact it came as a gift from the Holy Spirit. Despite his success in protecting his people, the easily-allured, young, foolish Samson did not set a good example of wisdom or conduct for us to follow. Despite disobedience and failure (see Judges 16:19), Samson was allowed one final great victory over the Philistines (see Judges 16:30).
God chooses who will perform His miracles, and when. We cannot limit Him as He carries out His purposes.