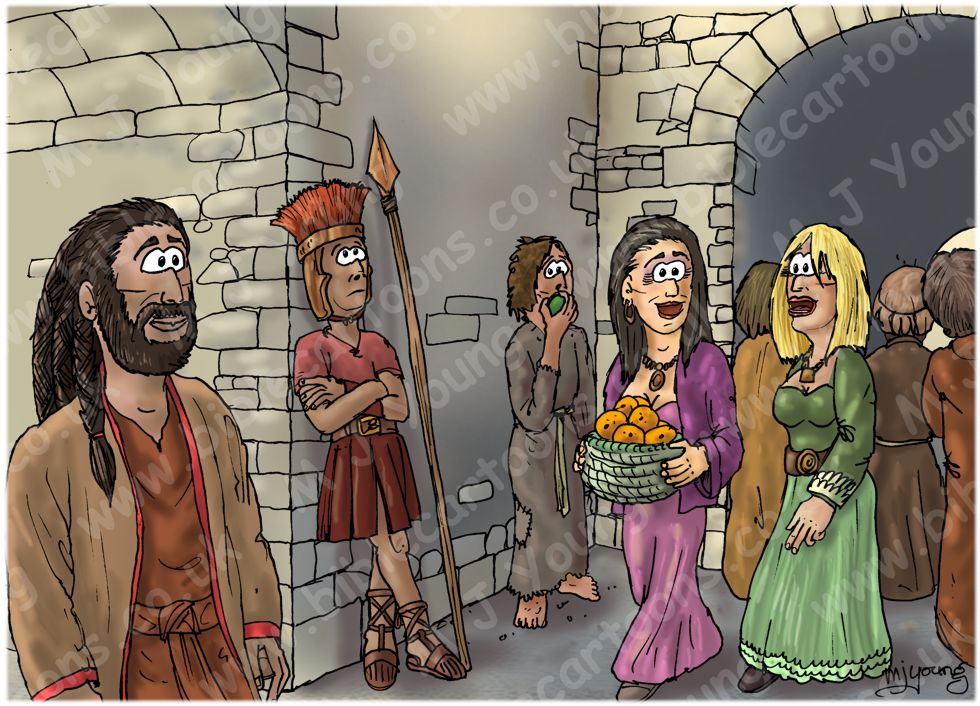 Judges 14:1-4 (ANIV)
Samson’s Marriage
1 Samson went down to Timnah and saw there a young Philistine woman. 2 When he returned, he said to his father and mother, “I have seen a Philistine woman in Timnah; now get her for me as my wife.”
3 His father and mother replied, “Isn’t there an acceptable woman among your relatives or among all our people? Must you go to the uncircumcised Philistines to get a wife?”
But Samson said to his father, “Get her for me. She’s the right one for me.” 4 (His parents did not know that this was from the Lord, who was seeking an occasion to confront the Philistines; for at that time they were ruling over Israel.)

TIME OF DAY:
The Bible doesn’t specify the time of day for this scene, so I have set it in the later morning.

LIGHTING NOTES:
The sun is high in the sky (above and to the left), which casts shadows to the right of objects and people.

CHARACTERS PRESENT:
Samson (entering through the gate of the village/town of Timnah).
On the right are two young women. The one carrying the basket of oranges is the one Samson liked.
Notice the Philistine soldier leaning on the wall, with his spear propped up; he looks rather bored by guard duty!
Notice also the ragged beggar, eating something. He is looking nervously at the soldier, in case he moves him on!
There are various unnamed people walking into a tunnel under the town’s walls in the background.

RESEARCH/ADDITIONAL NOTES:
This scene shows Samson entering the village/town of Timnah, where he sees a woman that he rather likes. Upon returning home to his parents (in Zorah), he is inspired by the Lord God to ask his parents to get her as his wife. The Bible informs us that this was God’s way of confronting the Philistines, using Samson.

Timnah Notes
The English translated name of the village/town Timnah is timnâ in Hebrew, which means “an allotted portion”. The place is mentioned in the Bible several times and which formed one of the landmarks on the Northern boundary of the allotment of Judah (Joshua 15:10), and belonged to the tribe of Dan (Joshua 19:43).

Timnah could be found among the broken undulating country by which the plains next to the Great Sea (Mediterranean) rose up towards the central mountains of this part of Israel.

It was also near Timnah that Tamar entrapped Judah into intercourse with her (Genesis 38:12-14).