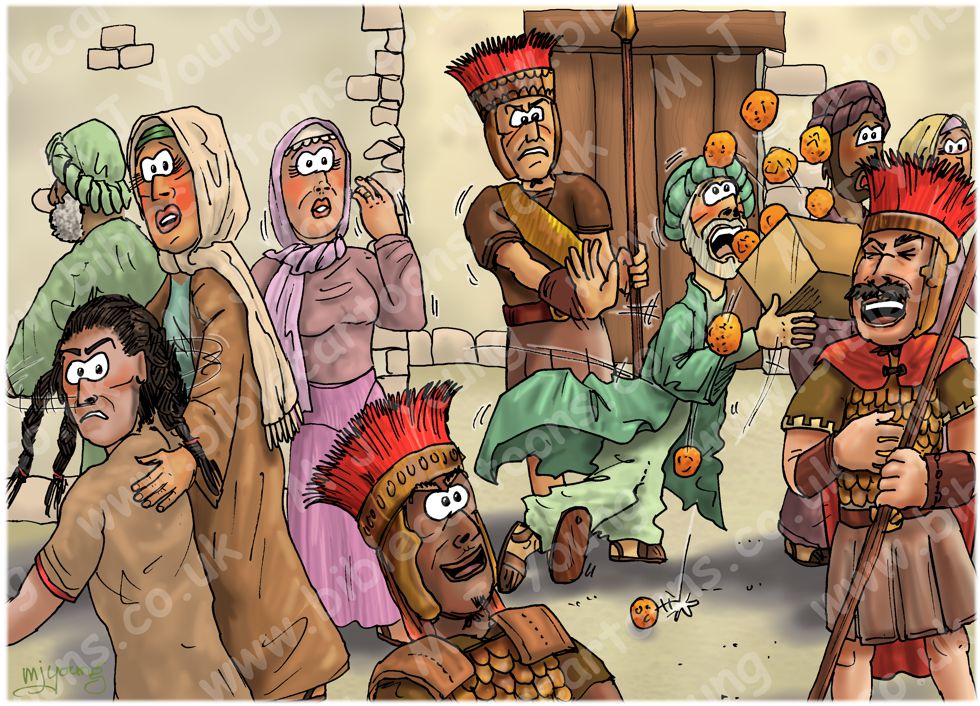 Judges 13:21-25 (ANIV)
21 When the angel of the Lord did not show himself again to Manoah and his wife, Manoah realised that it was the angel of the Lord.
22 “We are doomed to die!” he said to his wife. “We have seen God!”
23 But his wife answered, “If the Lord had meant to kill us, he would not have accepted a burnt offering and grain offering from our hands, nor shown us all these things or now told us this.”
24 The woman gave birth to a boy and named him Samson. He grew and the Lord blessed him, 25 and the Spirit of the Lord began to stir him while he was in Mahaneh Dan, between Zorah and Eshtaol.

TIME OF DAY:
The Bible doesn’t specify the time of day. I have set this scene in the early afternoon.

LIGHTING NOTES:
The sun is high in the sky (on the right), casting shadows to the left of people and objects.

RESEARCH/ADDITIONAL NOTES:
Originally I was going to draw Samson as a baby, but then the last verse in the Bible section above “and the Spirit of the Lord began to stir him…” caught my eye and I wondered what I might draw to demonstrate that concept. I decided to draw Samson as a young boy, experiencing the conflict between the Philistine soldiers and his own people, the Hebrews. I imagine the Philistine’s as occupying various villages and/or towns of the Hebrew people. Although the Bible doesn’t explicitly say that the Philistine army occupied any Hebrew towns/villages, I guess it was a possibility at the time. The Bible does say that “the Lord delivered them [the Hebrew people] into the hands of the Philistines for forty years” (Judges 13:1) because of the evil the Israelites did in the eyes of the Lord.

I decided to show a Philistine soldier tripping up an old Hebrew man, who is carrying a box of oranges. The soldiers two companions are having a good laugh at the Hebrew man’s expense. I expect soldiers get rather bored when they are not engaged in battle, and I could imagine these men turning against the Hebrew captives as a form of aggressive, brutal fun, to relieve their boredom. I image soldiers throughout history have mistreated the people they have conquered, for just this reason. In any case, notice the young Samson’s reaction: his mother is gently pushing him away fro the soldiers, but Samson’s head has snapped around, and a look of anger and resentment is on his face. This is how I have illustrated the idea of the Lord stirring Samson, from verse 25.