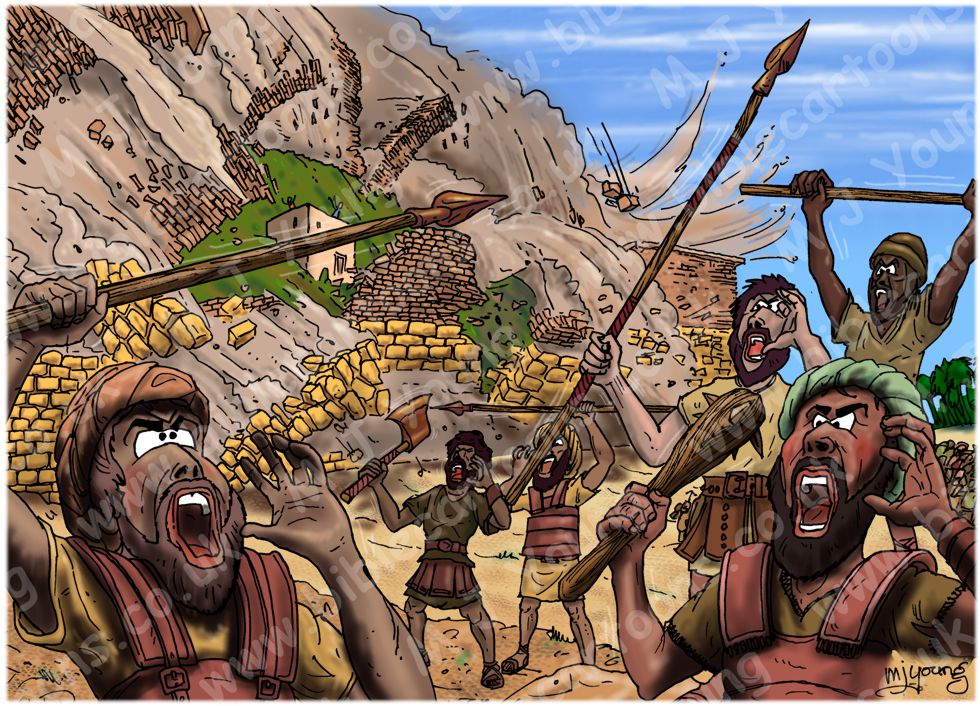 Joshua 6:15-21 (NLT)
15 On the seventh day the Israelites got up at dawn and marched around the city as they had done before. But this time they went around the city seven times. 16 The seventh time around, as the priests sounded the long blast on their horns, Joshua commanded the people, “Shout! For the LORD has given you the city! 17 The city and everything in it must be completely destroyed [1] as an offering to the LORD. Only Rahab the prostitute and the others in her house will be spared, for she protected our spies. 18 Do not take any of the things set apart for destruction, or you yourselves will be completely destroyed, and you will bring trouble on all Israel. 19 Everything made from silver, gold, bronze, or iron is sacred to the LORD and must be brought into his treasury.”

20 When the people heard the sound of the horns, they shouted as loud as they could. Suddenly, the walls of Jericho collapsed, and the Israelites charged straight into the city from every side and captured it.
21 They completely destroyed everything in it—men and women, young and old, cattle, sheep, donkeys—everything.

[1]
The Hebrew term used here refers to the complete consecration of things or people to the Lord, either by destroying them or by giving them as an offering; similarly in 6:18, 21.

TIME OF DAY:
I imagine it may have taken quite some time to walk around the city walls seven times, so I have set this scene in the afternoon.

LIGHTING NOTES:
The light for this scene comes from the sun, on the right.

RESEARCH/ADDITIONAL NOTES:
As siege strategies go, shouting at a city’s walls to bring them down must rank as one of the most unusual! However, where God is involved we continually learn that it is best not to underestimate Him! Certainly from the account of Joshua & the fall of Jericho (probably one of the most impregnable citadels of the time) we can conclude, as the Hebrew army must have, that what God promises to do, He does!

The collapse of the walls must have been spectacular… scarey, but amazing to see. In my cartoon illustration we can see various Hebrew soldiers shouting as loud as they can. I took photographs of myself in shorts, sandals & holding a staff to get the various soldier poses I needed for this scene.

I have done quite a bit of research of the warfare, arms & armour of Biblical times. I have discovered that the battle of Jericho occurred in 1406 BC, in the Late Bronze age. The warfare of that time was bloody & terrible, & apart from missile weapons (slings & stone, bow & arrows) combat consisted of hand-to-hand combat. Typical weapons of this period included the club (which I have drawn in scene 04), the hammer or maul, battle axe (which Joshua is carrying in scene 03), spear (seen in scenes 02-05), javelin, sword & the sickle sword.
Whilst body armour & shields offered some personal protection to the soldiers engaged in battles.
Swords in the Bronze age appear to have been more like long daggers than the long swords we may be more familiar with. This was because of the limitations of working with bronze. Apparently it was the introduction of iron & steel (in the Iron Age) that provided the material needed to fashion longer & stronger blades.

My intention is not to glorify battles & warfare, but neither do I want to avoid depicting it.

What caused the walls of Jericho to collapse?
The common secular (i.e. non-Christian) explanation is that an earthquake must have caused the collapse. Rahab’s house (the woman who hid the 2 Hebrew spies prior to the attack on Jericho) was apparently built against the city walls, & located on the north side of the city. Rahab’s house was miraculously spared while the rest of the city wall fell. It is difficult to imagine that a normal earthquake would be severe enough to collapse Jericho’s walls, & yet leave a section on the north side unharmed. ut amazingly, this is exactly what archaeologists have found. To my mind, the timing of the earthquake and it’s selectively destructive nature suggest something other than a natural calamity. I believe it must have been God at work.

http://www.answersingenesis.org/creation/v21/i2/jericho.asp has this to say about the walls of Jericho:
‘The mound, or ‘tell’ of Jericho was surrounded by a great earthen rampart, or embankment, with a stone retaining wall at its base. The retaining wall was some four to five meters (12–15 feet) high. On top of that was a mudbrick wall two meters (six feet) thick and about six to eight meters (20–26 feet) high. At the crest of the embankment was a similar mudbrick wall whose base was roughly 14 meters (46 feet) above the ground level outside the retaining wall. This is what loomed high above the Israelites as they marched around the city each day for seven days. Humanly speaking, it was impossible for the Israelites to penetrate the impregnable bastion of Jericho.’

You can see the stone & mud brick walls in my illustrations.


Bible Doctrine Notes
6:20 MIRACLE, Power (2.22F)
The fortress that was ancient Jericho stood in the way of God’s plans to give the promised land to the Hebrew people and a miraculous act of God removed it. All present quickly learnt that human defences can not withstand the power of God. Some Bible commentators wonder if God used an earthquake to demolish the walls of Jericho. Perhaps He used the same earthquake that dammed the river Jordan for the crossing of the Hebrew people to also weaken the walls of the fortress. Perhaps the encircling, marching footfalls of the Israelites then weaken the walls still further. Speculation is interesting, but can not be definitively proven. Whatever the secondary cause, if there were one, the primary action was the power of God, and the Bible is only concerned with that. The power of nature and the insecurity of wall foundations are both subject to the will and power of God. God’s power is supreme in His universe, and He uses that power to help His people accomplish His mission. This powerful demonstration of God’s power sent His fame throughout the land of Canaan. Our task is to let His fame and power be known throughout the world.