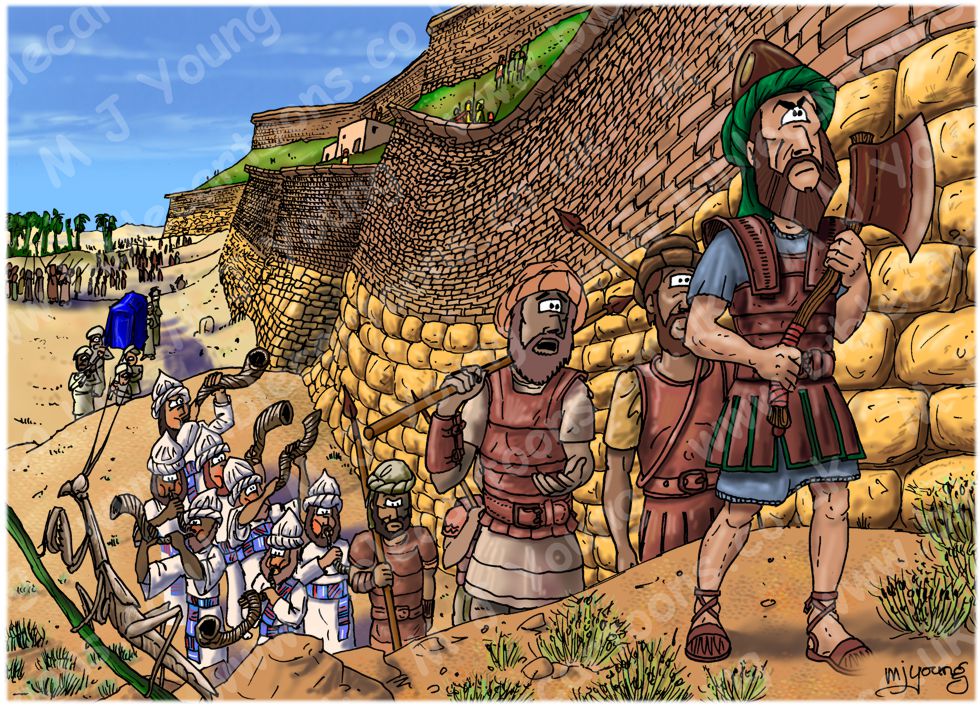 2 But the LORD said to Joshua, “I have given you Jericho, its king, and all its mighty warriors. 3 Your entire army is to march around the city once a day for six days. 4 Seven priests will walk ahead of the Ark, each carrying a ram’s horn. On the seventh day you are to march around the city seven times, with the priests blowing the horns. 5 When you hear the priests give one long blast on the horns, have all the people give a mighty shout. Then the walls of the city will collapse, and the people can charge straight into the city.”

6 So Joshua called together the priests and said, “Take up the Ark of the Covenant, and assign seven priests to walk in front of it, each carrying a ram’s horn.” 7 Then he gave orders to the people: “March around the city, and the armed men will lead the way in front of the Ark of the LORD.”

8 After Joshua spoke to the people, the seven priests with the rams’ horns started marching in the presence of the LORD, blowing the horns as they marched. And the priests carrying the Ark of the LORD’s covenant followed behind them. 9 Armed guards marched both in front of the priests and behind the Ark, with the priests continually blowing the horns. 10 “Do not shout; do not even talk,” Joshua commanded. “Not a single word from any of you until I tell you to shout. Then shout!” 11 So the Ark of the LORD was carried around the city once that day, and then everyone returned to spend the night in the camp.

LIGHTING NOTES:
The sun (high & on the left) lights this scene

CHARACTERS PRESENT:
We can see the Hebrew army marching around the walls of Jericho. Joshua (son of Nun) is in the lead (with the big bronze battle axe), followed by a few spear-carrying soldiers. Behind them you can see the seven priests, each blowing a ram’s horn. Some distance behind them we can see eight Levite priests carrying the Ark of the covenant, which was always covered in a blue cloth, when being transported. Behind them is the rest of the army, in the distance.

RESEARCH/ADDITIONAL NOTES:
We know from scripture that the officers of the Hebrew army recommended that the people keep about 2000 cubits (or 1000 yards (about 914 metres)) distance between them & the Ark of the Covenant (see Joshua chapter 3 & verses 1-4.) However, that wouldn’t make a very good cartoon illustration, so I have used “artistic licence” & shortened the distance somewhat! Similarly, we see the Hebrew army marching right next to Jerichos’ city walls, where in fact they would probably have wanted to march several hundred yards/metres away… out of bow & sling shot range!

Who was Joshua?
The assistant and successor of Moses. He was the son of Nun, the son of Elishama, head of the tribe of Ephraim (Exodus 33:11; Numbers 1:10) Ephraim was one of the two sons of Joseph, born whilst he was in Egypt. Joseph was the man who received the multi-coloured coat from his father Jacob.
I have been working on designs for flags & banners of the 12 tribes of the Hebrew people. The colours I intend using for Joseph’s banner will be greens 7 blue/grey’s. You can see these colours depicted in Joshua’s clothes.

What did the priests wear?
The Priests wore these garments:
A long tunic (the embroidered coat) with sleeves of white linen, woven throughout without seam. (Ex 39:27.)
White trousers (underclothes) from hip to thigh. (Ex 39:28.)
A white linen hat or mitre wound like a turban, but cone-shaped. (Ex 39:28.)
A sash or girdle woven made of fine linen cloth and embroidered with blue, purple, and scarlet yarn (Ex 39:29)

Uniformity of soldiers arms & armour
I haven’t read this anywhere (yet!) but I doubt that every soldier in an ancient army wore exactly the same design of armour. Mass production methods in modern times have allowed matching outfits or uniforms to be made, so that all soldiers wear the same kit. But in the late Bronze age, I can’t imagine any army soldier having identical armour, clothing or uniform. It is quite possible that arms & armour would be passed down from father to son, since they would be very valuable items. Even when a complete army was kitted out by one person (a king, for instance) I imagine that many different artisans & craftsmen would have been involved in the manufacture of their clothes, armour & weapons, inevitably creating variation in the end products. For this reason I have introduced variations in the arms & armour of the various soldiers in this scene.

The grass on the slopes outside Jericho & beneath Josha’s feet is Aegilops peregrina or Goat grass.

The Praying Mantis in the foreground is Ameles heldreichi (I can’t find a common name for this mantid!)


Bible Doctrine Notes
6:2 Salvation, As Deliverance (4.24D)
God proved His power to deliver His promises by the sign of His deliverance of Jericho into the hands of the Hebrew people (see Exodus 6:8). 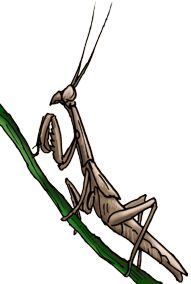