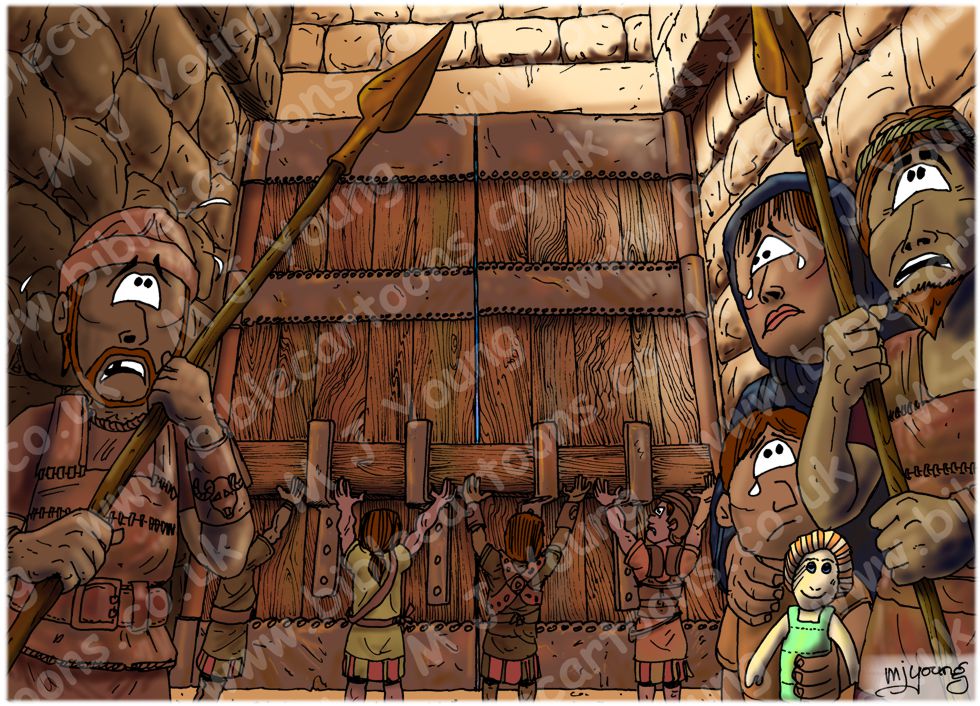 Joshua 6:1 (NLT)
Now the gates of Jericho were tightly shut because the people were afraid of the Israelites. No one was allowed to go in or out.

TIME OF DAY:
This scene is what I imagine you would have seen from inside the city gates. I have set this scene in the early morning.

LIGHTING NOTES:
The early morning sunlight is shining down from above the walls, & casting long, deep shadows across the scene.

CHARACTERS PRESENT:
Various Canaanite people. In the background we see four men placing a huge wooden cross bar into four bronze gate bars, to keep the Hebrew people out. In the fore ground we can see 2 soldiers & a mother & daughter, al looking fearful.

RESEARCH/ADDITIONAL NOTES:
Jericho is located 846 ft (258 metres) below sea level in an oasis in Wadi Qelt in the Jordan Valley. The annual rainfall in this egion is 6.4 inches (160 mm), mostly concentrated between November and February. The average temperature is 59 °F (15 °C) in January and 88 °F (31 °C) in August. The constant sunshine, rich alluvial soil, and abundant water from the spring of Ein es-Sultan, have always made Jericho an attractive place for human agriculture & settlement. Jericho is considered to be one of the oldest inhabited places on the planet, with estimates that suggest 10,000 years of human habitation.

We know from the scriptures (Joshua 2:9 (ANIV)) that the Canaanite people were afraid of the invading Hebrew army, ‘…“I (Rahab, the woman who hid the two Hebrew spies) know that the Lord has given this land to you (the Hebrew people) and that a great fear of you has fallen on us (the Canaanite people), so that all who live in this country are melting in fear because of you.”’

I could find little evidence of what city gates might look like. I imagined they would be very thick wooden planks, with bronze bindings to strengthen them, which is what I have depicted. Similarly, it proved difficult finding any reference to Canaanite arms & armour. The fall of Jericho occurred at the end of the Late Bronze Age. This being the case, I have shown both armies in leather armour, with wood & cast bronze weaponry – axes & spears.


Bible Doctrine Notes
6:1 CHRISTIAN ETHICS, War and Peace (4.44G)
The Hebrew word chêrem carries the meaning of a thing or person utterly dedicated to the Lord beyond redemption; dedicated, a ban, appointed to utter destruction. In the narrative of the fall of Jericho we see a vivid portrayal of such appointed to utter destruction, to the Lord. The practice stood as a reminder of the Hebrew people’s total devotion to the Lord as their sovereign. The victory was seen as God’s; His judgement on those who sensed His sovereignty yet failed to worship Him.
Contemporary Christians should be very careful not to consider the invasion of Canaan and it’s ensuing “Holy war” as a model of the way war should be waged. At the time of the Canaan invasion, Israel were only one group of people seeking a place in which to establish a nation. Also, it seems likely that God made His purposes fit the level of moral understanding and practice out of which the Hebrew people could operate to combat the people and ideologies of false gods. We should not see God’s unique operations at this time in history as setting a precedent for later generations to follow. Seldom did following generations of Israelites employ chêrem.