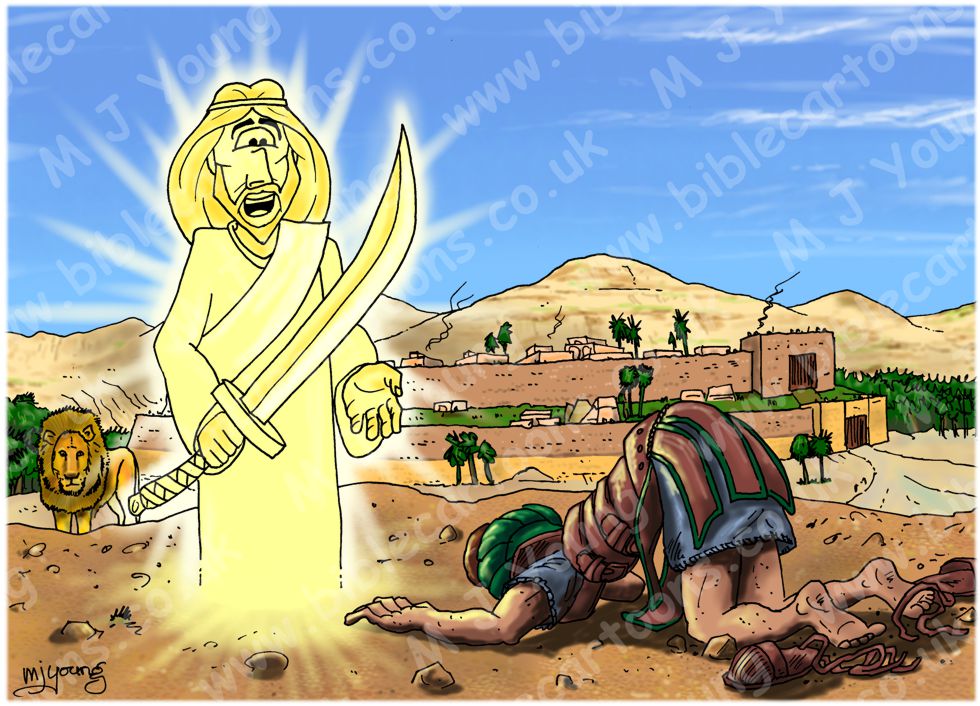 Joshua 5:13-15 (NLT)
13 As Joshua approached the city of Jericho, he looked up and saw a man facing him with sword in hand. Joshua went up to him and asked, “Are you friend or foe?”
14 “Neither one,” he replied. “I am commander of the LORD’s army.” At this, Joshua fell with his face to the ground in reverence. “I am at your command,” Joshua said. “What do you want your servant to do?”
15 The commander of the LORD’s army replied, “Take off your sandals, for this is holy ground.” And Joshua did as he was told.

TIME OF DAY:
Indeterminate from the story – I imagine the scene to have taken place in the morning.

LIGHTING NOTES:
The primary light source for this scene is coming from the commander of the LORD’s army.

CHARACTERS PRESENT:
The commander of the Lord’s army. Joshua (son of Nun) – bowing low with his face to the ground.
Lion.

Frequent biblical reference to Jericho shows that it was of major importance in the land. Jericho is well identified with Tell es-Sultan, five miles west of the Jordan and seven miles north of the Dead Sea. There were so many groves of date palms around the never-failing spring that Jericho was sometimes called “The City of Palm Trees”. You can see palm trees all over the landscape in my cartoon!

How old was Joshua at the time the Israelites entered Canaan?
Scripture does not state an exact age for Joshua at the time of the Canaan invasion. There are some clues that allow us to approximate his age at this time though. If Joshua was about 15 years old at the time that God gave the Ten Commandments to Moses on Mount Sinai, & we add another 40 years wandering in the wilderness this would put Joshua’s age at approximately 55 years old when he first entered into the land of Canaan in approx. 1406 BC.

Having just crossed the Jordan river, the Hebrew people were now committed to conquering the Promised Land. But how was this to be achieved? Joshua was aware that the Hebrew army had no siege weapons at all & yet they were faced with Jericho, perhaps the most fortified & apparently impregnable city in the land of Canaan. Joshua knew that the battle for Jericho would have to be won, since bypassing the city would leave the Hebrew women, children & livestock open to attack. But Joshua himself had never before led an attack on a fortified city. In my cartoon, Joshua has gone from Gilgal (were the Hebrew army was camped) to view Jericho for himself. We can see the city in the middle distance. Here he has a most unexpected encounter…

Joshua was startled to see a soldier, brandishing his sword, so he challenged the soldier, effectively saying, “Who goes there, friend or foe?” The soldier replied, “I am the commander of the Lord’s army.” Who commands the Lord’s army?… the Lord God Almighty himself! It has been suggested that it was an angel who appeared to Joshua, but this can not be the case, since an angel would have told Joshua not to worship him, but to worship the Lord. But this “soldier” did not say that. In fact he said, “Take off your sandals, for this is holy ground.” which would indicate the presence of God himself before Joshua. Many people see this as another example of a pre-incarnate Jesus Christ, in other words, Jesus standing before Joshua, before his birth in Bethlehem, 1200 years later. This suggests that Jesus Christ was indeed full man & fully God. certainly it seems that Joshua concluded he was in God’s presence. He also realised that he was in command of the human, Hebrew army, but that here was a “soldier” before him who commanded the Hebrews & a vast heavenly host as well. Joshua was an army commander, under the command of God. The burden and responsibility of leadership did not, in fact, fall on Joshua alone, rather God here proved that he would topple Jericho & that God himself was Commander-in-chief of the Canaan invasion. Shortly God would reveal his unique tactics for capturing Jericho to Joshua. By removing his sandals Joshua acknowledged that this battle and the entire conquest of Canaan was God’s conflict and that he was a servant of God, as we all are.

Divine judgement on Canaan
The Commander of the army of the Lord stood with a drawn sword, which seems to indicate his willingness to fight for, & with Israel. It’s interesting to note that in Genesis 15:16 God predicted the return of the Hebrew people to the land of Canaan long before it happened. God had not brought his judgement to bear upon the Canaanite people, & had, in fact, long delayed his divine judgement on this region. But finally the day of their judgement had dawned. The Hebrew people were to be the instrument of that divine punishment.

Leviticus 20:23 states,’You (the Hebrew nation) must not live according to the customs of the nations I am going to drive out before you (the Canaanites). Because they did all these things, I abhorred them.’ In order to discover what is meant by ‘these things’ you will need to read Leviticus. Much of that book is devoted to laws, statutes & commands from God, to the Hebrew people. Chapter 20 has a long list of sins which it is clear the Canaanites had long carried out. Had the Canaanites turned from their sins (perverse sexual practices, & possible human sacrifice to their “gods”), surely God would have spared them, being a just & compassionate God. As 2 Peter 3:9 states, ‘The Lord is not slow in keeping his promise, as some understand slowness. He is patient with you, not wanting anyone to perish, but everyone to come to repentance.’ It seems clear that the Canaanites had been given centuries to repent of their evil practices, but had not done so. People are always given the opportunity to co-operate with God: to receive his favour & blessing. But for those people who do evil & reject the Lord, only judgement & terrible punishment awaits. People get what they choose, in the end. For the Amorites (or the inhabitants of Canaan) the time of the divine judgement had come.

Quite a detailed & very interesting description of the archaeological evidence for the fall of Jericho’s walls can be found at this website: http://www.answersingenesis.org/creation/v21/i2/jericho.asp


Bible Doctrine Notes
5:13-15 REVELATION, Messengers (3.21G)
God presented Himself in Joshua’s path as a messenger, who, once recognised by Joshua was rightly worshipped. This encounter with God echoed and mirrored Moses’ encounter with God (see Exodus 3). It served to reinforced God’s call on Joshua. The messenger was called a man, yet lead the heavenly armies and brought Joshua to his knees.

5:15 GOD, Holy (1.11C)
Joshua had a similar encounter with God, as Moses had done at the burning bush (see Exodus 3). God told them both that they were standing on holy ground and to take off their sandals, which represents these leaders humbling themselves before God. That holiness reminds us of the vast difference between God and human beings and should always remind us to reverence and respect God. We have nothing to fear when we come before God in reverence, respecting His unique holiness.