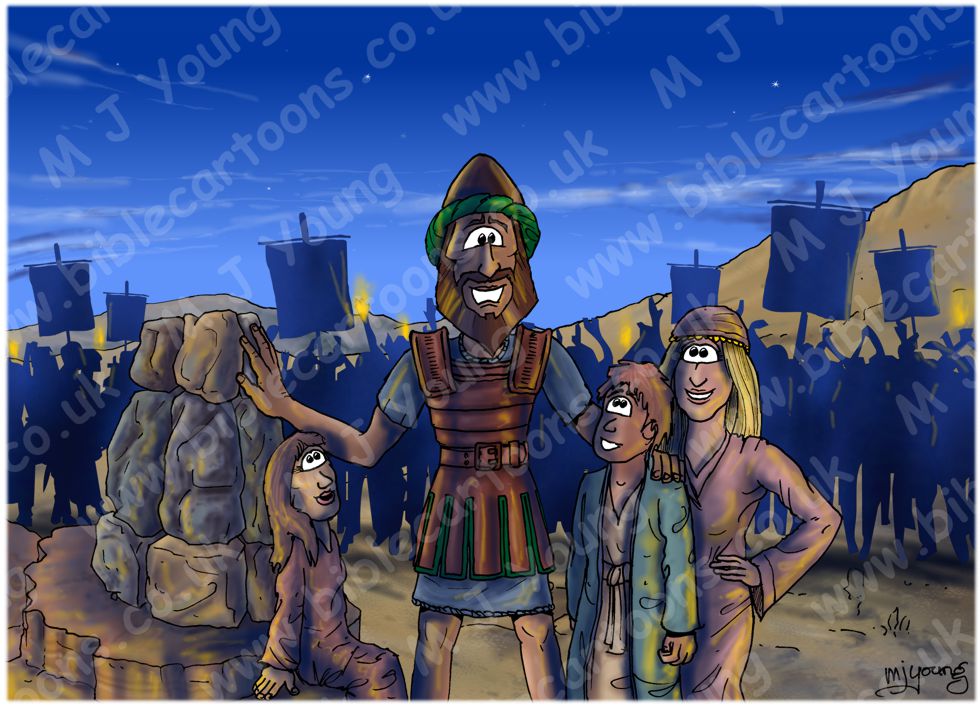 Joshua 4:19-24 (ANIV)
19 On the tenth day of the first month the people went up from the Jordan and camped at Gilgal on the eastern border of Jericho. 20 And Joshua set up at Gilgal the twelve stones they had taken out of the Jordan. 21 He said to the Israelites, “In the future when your descendants ask their fathers, ‘What do these stones mean?’
22 tell them, ‘Israel crossed the Jordan on dry ground.’ 23 For the Lord your God dried up the Jordan before you until you had crossed over. The Lord your God did to the Jordan just what he had done to the Red Sea [1] when he dried it up before us until we had crossed over. 24 He did this so that all the peoples of the earth might know that the hand of the Lord is powerful and so that you might always fear the Lord your God.”

LIGHTING NOTES:
There are two sources of light in this scene, the setting sun (out of view on the left) & various torches & campfires (out of view in the bottom left & right foreground). Note the sunlight catching the top of Joshua’s helmet, on the left hand side.

The second source of light are the torches & campfires, which create warm yellow hues that can clearly be seen on the edges of the figures & rocks in the foreground. It can also be subtly seen reflected off the edges of the background figures.

CHARACTERS PRESENT:
Joshua son of Nun is the main character in the centre of this scene, with three young Hebrew children by him.

RESEARCH/ADDITIONAL NOTES:
I included the three children with Joshua as his speech in the above Bible text clearly refers to future generations & children visually represent them.

The sky, clouds & lighting effects are deliberately designed to connect with, & reflect, a previous scene in this series: Joshua 04 – Jordan crossing – Scene 07 – 12 stone monument. This current scene is set shortly after that scene, when the 12 stone monument has just been erected & Joshua is referring to it in his speech to the Hebrew people.


Bible Doctrine Notes
4:20-24 REVELATION, Events (3.21A)
A physical monument can be God’s instrument of revelation. God had a 12 stone monument built so that the Hebrew people could instruct new generations about the great events by which God had brought the nation of Israel into the Promised Land. The monument was a constant reminder that God keeps His promises and purposes faithfully. This event was not limited solely to Israel, but rather shows God’s ultimate goal of revealing Himself to all peoples of the earth.

4:24 GOD, One God (1.11B)
Sometimes God acts in a powerful way so that perceptive, sensitive people will recognise Him as Lord. God’s division of the river waters was an echo and reminder of His Red Sea miracle in the Exodus. If we look about us to see the evidence of God it is not difficult to see the hand of God at work in many things. God does not seem to want to remain a complete mystery; rather He wishes to reveal Himself as the one true God to all people.

4:24 HISTORY, Universal (3.32F)
Historical revelation allows the knowledge of God to be accessible to people far beyond a select group with secret information.