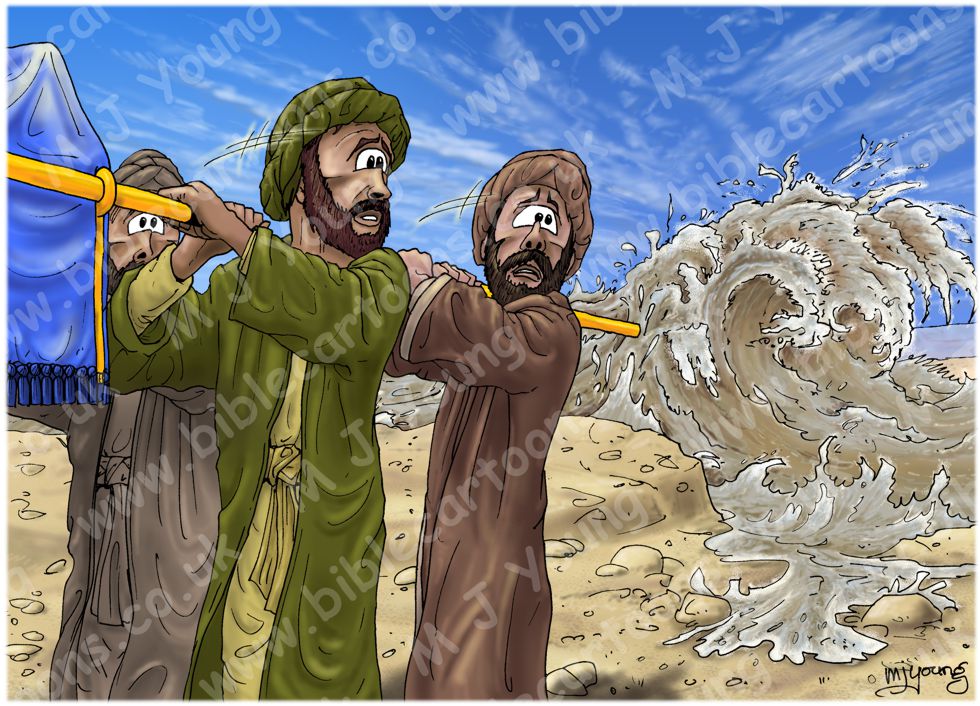 LIGHTING NOTES:
Light comes from the sun, high & to the left of the scene.

CHARACTERS PRESENT:
Three of the Levites tasked with carrying the Ark of the Covenant.

RESEARCH/ADDITIONAL NOTES:
I enjoyed drawing the surging Jordan river waters thundering back into flood conditions as the Levite priests carrying the Ark of the Covenant stepped out of the river bed. Because of the men in the scene you can’t really see the waters & rocks, so I have included the scene with the men removed (see below) 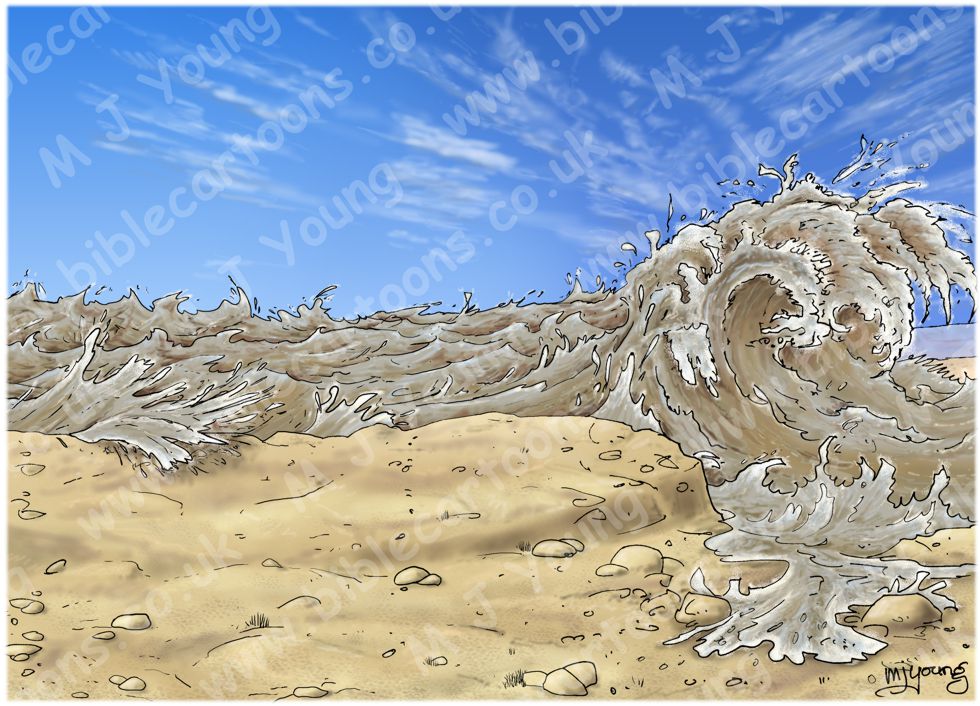 The Ark of the Covenant is the gold box, covered in a blue cloth, being carried by the men in the scene above.

I have always drawn eight men carrying the Ark of the Covenant in my various Bible Cartoons, although there are only three visible of the rear ones in the scene above. I don’t know exactly how many men carried it, I don’t think the Bible specifies the number. The very first scene I ever drew with men carrying the ark is from Numbers, chapter 7.

There is an interesting article in the Jewish Bible Quarterly relating to the weight of the Ark & the assumption that only four men carried it:
“In the light of the fact that most commentaries do not calculate the weight of the Tabernacle, I was pleased to see the article by Josiah Derby wherein he attempts to calculate the weight of the Ark of the Covenant, including the weight of the gold overlay. He calculates that weight at about 288 pounds (131 kilograms), and argues that is too heavy for four men to carry on their shoulders, each having to bear a load of about 72 pounds (33 kilograms). This conclusion disturbed me, because the Ark was carried many times on the shoulders of four men (see in particular Ex. 25:14 [2]; Num. 7:9; Jos. 3:13; 4:16; 6:12; I Kgs. 2:26; I Chr. 15:15).”
[Source: http://jbq.jewishbible.org/assets/Uploads/352/352_Ark.pdf]

I have used italics in the above quote to show the prevalent assumption amongst Bible commentators that the Ark was carried by four men. All of the Bible references mentioned in the quote are listed below [2], but none of them specify how many men carried the Ark of the Covenant!

The Bible doesn’t exactly specify how long the carrying poles were either, however, we do know that the poles were long, because of the reference in 1 Kings 8:6-9 [1] “These poles were so long that their ends could be seen from the Temple’s main room”. Since the poles were pretty long, I think it is reasonable to assume eight men might have carried the Ark – why else would the poles have been so long?! In addition, we know from the Ark’s description in Exodus 25:10-16 [2] that it was made of wood overlaid with gold. I expect it was quite heavy, though commentators don’t agree just how heavy: estimates range from 188-4000lbs!

For these reasons I have always illustrated it as being carried by eight men, 2 on each end of the gold-overlaid poles that supported it.
I know that Bible commentators & other illustrators often show four men carrying the Ark.

[1]
1 Kings 8:6-9 (NLT)
6 Then the priests carried the Ark of the Lord’s Covenant into the inner sanctuary of the Temple—the Most Holy Place—and placed it beneath the wings of the cherubim.
7 The cherubim spread their wings over the Ark, forming a canopy over the Ark and its carrying poles.
8 These poles were so long that their ends could be seen from the Temple’s main room—the Holy Place—but not from the outside. They are still there to this day.
9 Nothing was in the Ark except the two stone tablets that Moses had placed in it at Mount Sinai, where the Lord made a covenant with the people of Israel when they left the land of Egypt.

[2]
Exodus 25:10-16 (ANIV)
10 “Have them make a chest of acacia wood—two and a half cubits long, a cubit and a half wide, and a cubit and a half high. [About 45 inches long, 27 inches wide, and 27 inches high.]
11 Overlay it with pure gold, both inside and out, and make a gold moulding around it.
12 Cast four gold rings for it and fasten them to its four feet, with two rings on one side and two rings on the other.
13 Then make poles of acacia wood and overlay them with gold.
14 Insert the poles into the rings on the sides of the chest to carry it.
15 The poles are to remain in the rings of this ark; they are not to be removed.
16 Then put in the ark the Testimony, which I will give you.

Numbers 7:9 (ANIV)
9 But Moses did not give any to the Kohathites, because they were to carry on their shoulders the holy things, for which they were responsible.

Joshua 3:13 (ANIV)
13 And as soon as the priests who carry the ark of the Lord—the Lord of all the earth—set foot in the Jordan, its waters flowing downstream will be cut off and stand up in a heap.”

Joshua 4:16 (ANIV)
16 “Command the priests carrying the ark of the Testimony to come up out of the Jordan.”

Joshua 6:12 (ANIV)
12 Joshua got up early the next morning and the priests took up the ark of the Lord.

1 Kings 2:26 (ANIV)
26 To Abiathar the priest the king said, “Go back to your fields in Anathoth. You deserve to die, but I will not put you to death now, because you carried the ark of the Sovereign Lord before my father David and shared all my father’s hardships.”

1 Chronicles 15:15 (ANIV)
15 And the Levites carried the ark of God with the poles on their shoulders, as Moses had commanded in accordance with the word of the Lord.