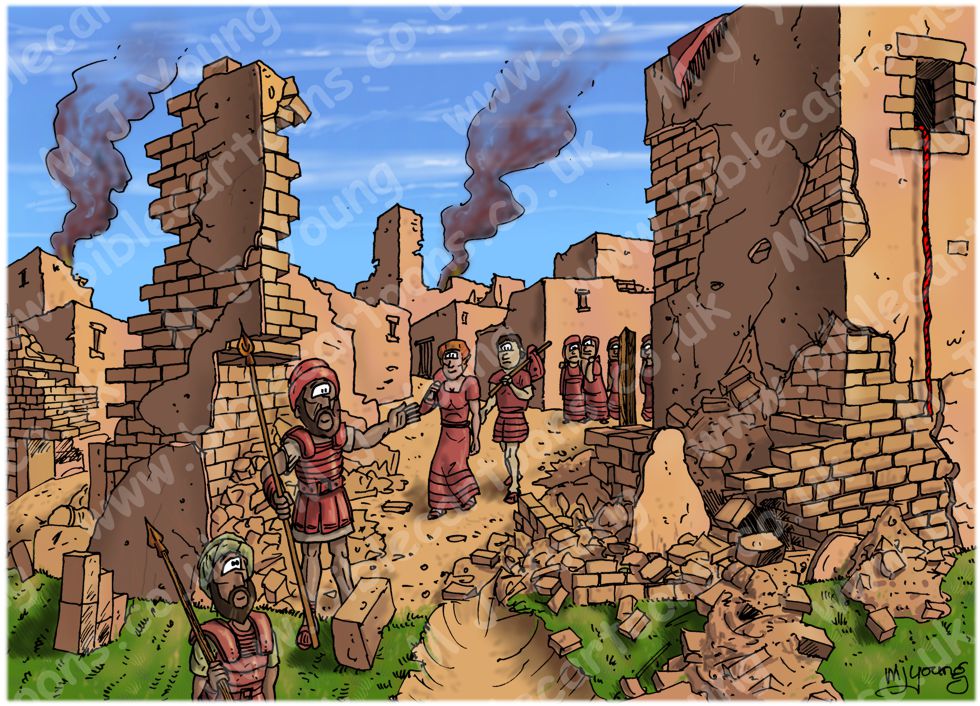 Joshua 6:22-23 (NLT)
22 Then Joshua said to the two spies, “Keep your promise. Go to the prostitute’s house and bring her out, along with all her family.”

23 The young men went in and brought out Rahab, her father, mother, brothers, and all the other relatives who were with her. They moved her whole family to a safe place near the camp of Israel.

TIME OF DAY:
I imagine the scene to have been in the late afternoon.

CHARACTERS PRESENT:
The two Hebrew spies have been sent through the collapsed lower wall & we see them in the foreground of this cartoon, gesturing to Rahab [Harlot/Innkeeper] & her family to come out of their house & accompany them to the Hebrew camp at Gilgal (see Joshua 5:10.)

RESEARCH/ADDITIONAL NOTES:
This scene was entirely made up from my imagination, & based on the previous drawings & research I did for these cartoons. The scene reminds me of scenes of war-torn Second World Europe.

Notice the scarlet cord or rope, hanging from the window on the right of the cartoon illustration.
Joshua 2:17-18 (NLT) says, ‘Before they (the 2 spies) left (Jericho), the men told her (Rahab), “We can guarantee your safety only if you leave this scarlet rope hanging from the window. And all your family members—your father, mother, brothers, and all your relatives—must be here inside the house.’
Rahab did leave the scarlet cord hanging from her window, & this was the sign that identified Rahab’s house to the spies after the collapse of the walls of Jericho.

Rahab is the woman on the left of the group, picking their way over rubble towards the two Hebrew spies in the foreground.

In many bibles Rahab is described as a harlot, or prostitute. Two words are used in the Hebrew Bible to describe Rahab, ‘ishshah & zanah. The word for wife, woman, female is ‘ishshah, whilst zanah means harlot or prostitute, but can also refer figuratively to idolatry, of a person who worships a foreign “god”. Given this meaning, Rahab may simply be refered to as a foreigner (a canaanite) who worships her own, foreign (i.e. Not Jehovah) “god”.

The word zanah can also refer to a hostess, an inn-keeper or tavern keeper, for the accommodation of travellers. Many Bibles add a footnote to this effect.