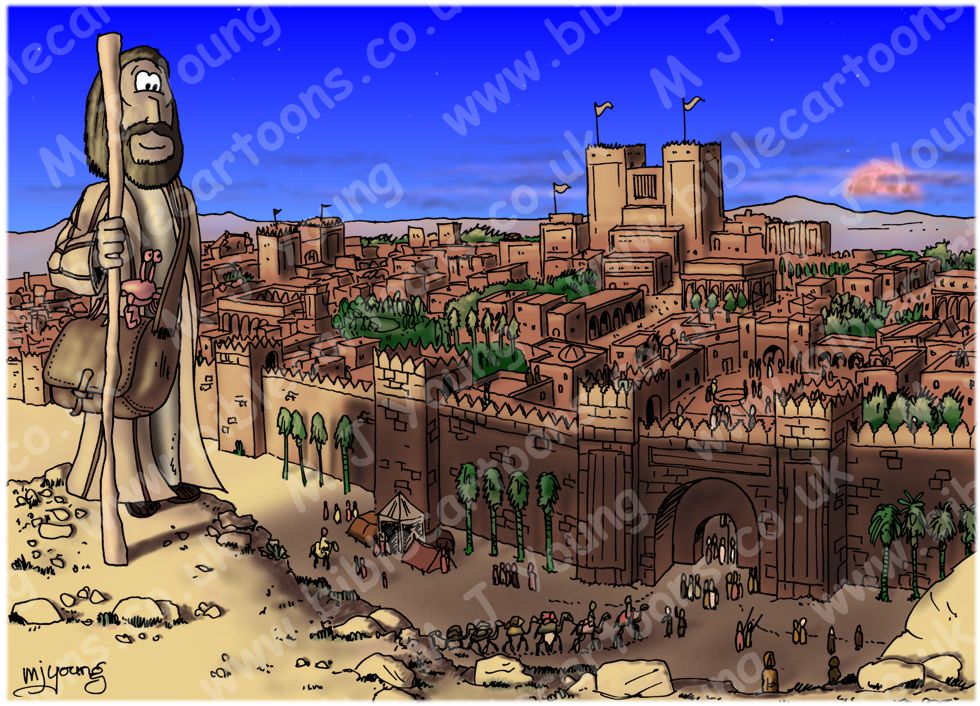 Jonah 3:1-3 (NLT)
1 Then the LORD spoke to Jonah a second time: 2 “Get up and go to the great city of Nineveh, and deliver the message of judgment I have given you.”
3 This time Jonah obeyed the LORD’s command and went to Nineveh, a city so large that it took three days to see it all.

TIME OF DAY:
Indeterminate from the scriptures. I have set the scene at sunset.

LIGHTING NOTES:
Main light comes from the setting sun, in the west, which is left of this scene. Glow from candles, torches, fires in the city of Nineveh provide other light, as does the rising red moon.

CHARACTERS PRESENT:
Jonah & his new friend the crab! Various people in the distance going into & out of the main gate of the city of Nineveh.

RESEARCH/ADDITIONAL NOTES:
Google Earth position & orientation 36°21’33.56” N 43°09’09.60” E Looking ENE towards 2 mountains. The peak on the left has no name that I am able to find. It stands behind 2 lower, closer peaks that do have names: Jabel Bashiqah & Jabel Maqlub. On the right of the cartoon stands Jabal Ayn as Safrah.

I found some photographs of the area around Nineveh on the internet (Panoramio – a photo sharing program) which helped inform me of the colour & nature of the local rocks & othern landscape features & their colours.

Assyrian defensive walls are depicted as having stepped crenellations on top of their formidable height. This is certainly quite a different architectural style to the Hebrew.

Nineveh was a large city & the capital of the Assyrian empire. It was also one of the most ancient cities in the world, as mentioned in Genesis 10:8-12.It was at least 54 miles (87km) in circumference, & would take Jonah three days to walk round upon the walls, and announce God’s message: “Forty more days and Nineveh will be overturned.”

The journey from the Mediterranean coast to Nineveh, if it could be walked in a straight line, is about 515 miles (828 km.)