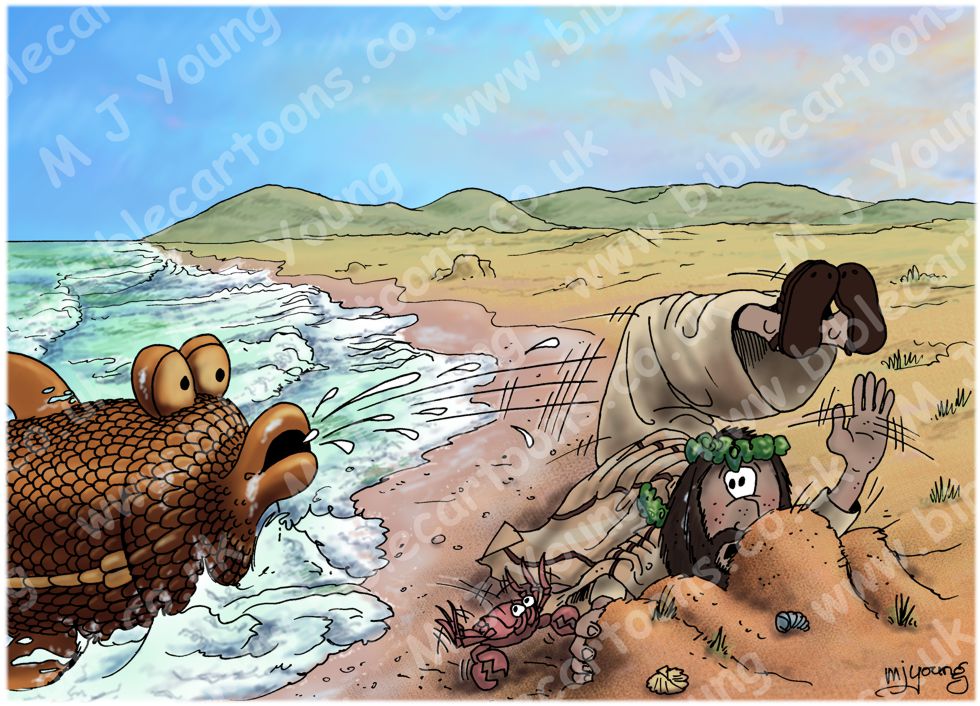 Jonah 2:10 (NLT)
Then the LORD ordered the fish to spit up Jonah on the beach, and it did.

TIME OF DAY:
Indeterminate from scripture. I have set the scene in the early morning, after sunrise.

LIGHTING NOTES:
Light is diffused, coming from the east, which is right of the picture.

CHARACTERS PRESENT:
Jonah, being spat out of the large fish, along with the crab from the big fish’s stomach.

RESEARCH/ADDITIONAL NOTES:
I look at Google earth to see if I could find a suitable location for Jonah’s land fall. I found a site north of Haifa Bay, & near the Lebanon border, called Nahariya beach. I liked the scene as it included the Adamit mountain range that form the border between Israel & Lebanon.
Google earth location & orientation 32°59’31.13” N 35°04’58.52” E Looking NNE.

Notice I have put seaweed in Jonah’s hair, which is referred to in Jonah’s prayer, inside the fish, in Jonah 2:5.

I decided that the crab seen in the previous cartoon (Scene 06 – Prayer) could be spat out, along with Jonah. The crab will turn up in most of the remaining cartoons as Jonah’s companion!