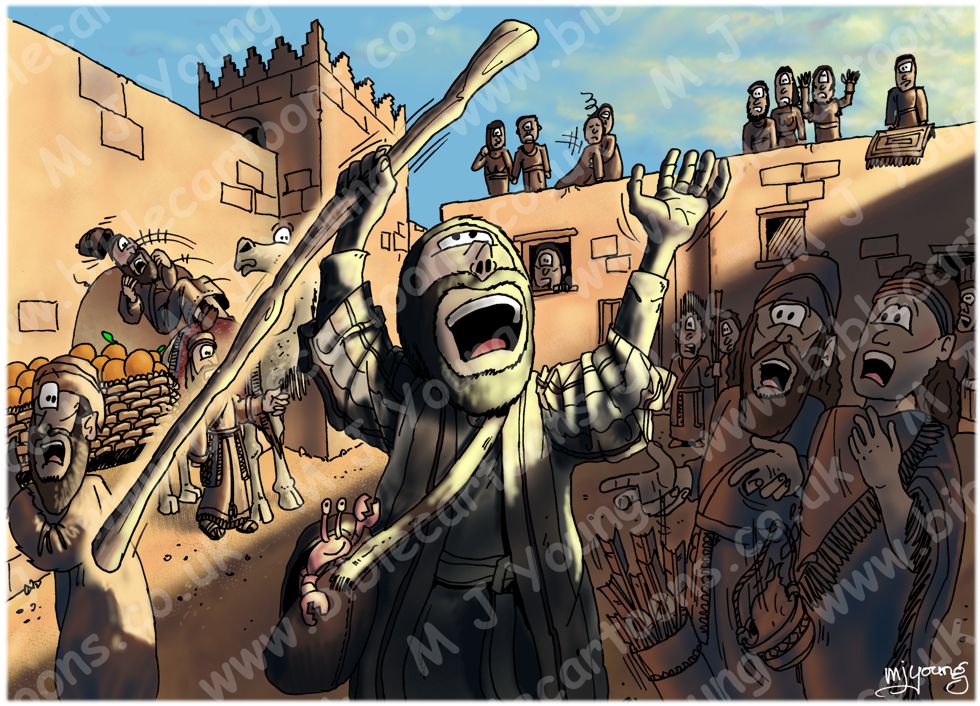 Jonah 3:4-5 (NLT)
4 On the day Jonah entered the city, he shouted to the crowds: “Forty days from now Nineveh will be destroyed!” 5 The people of Nineveh believed God’s message, and from the greatest to the least, they decided to go without food and wear sackcloth to show their sorrow.

TIME OF DAY:
The scriptures do not specify a time of day, so I have set the scene at early morning, just after dawn.

RESEARCH/ADDITIONAL NOTES:
In the previous cartoon, we see Jonah atop an earth mound, looking down on the Assyrian city of Nineveh.
Here, he has entered the city & is in full prophetic mode: with staff & hand upraised, shouting the Lord’s message to the Assyrians of the city: “Forty days from now Nineveh will be destroyed!” We know from verse 5 that everyone in the city believed God’s message, which is why I have shown the bystanders looking shocked, worried & dropping things!

We read in verse 5: “The people of Nineveh believed God’s message.” They had no doubt that the threat would be fulfilled, but what is surprising is that they also seem to have instinctively recognised that there was a way to avoid this calamity. Although Jonah gave them no hint of God’s mercy in his prophetic message, the people of Nineveh seem to have understood that their speedy remorse & repentance would prevented the fulfilment of God’s promise. It’s interesting to note that God’s threats are always conditional. If we repent & turn from our own evil ways, God is faithful & just to forgive us our sins (1 John 1:9.)