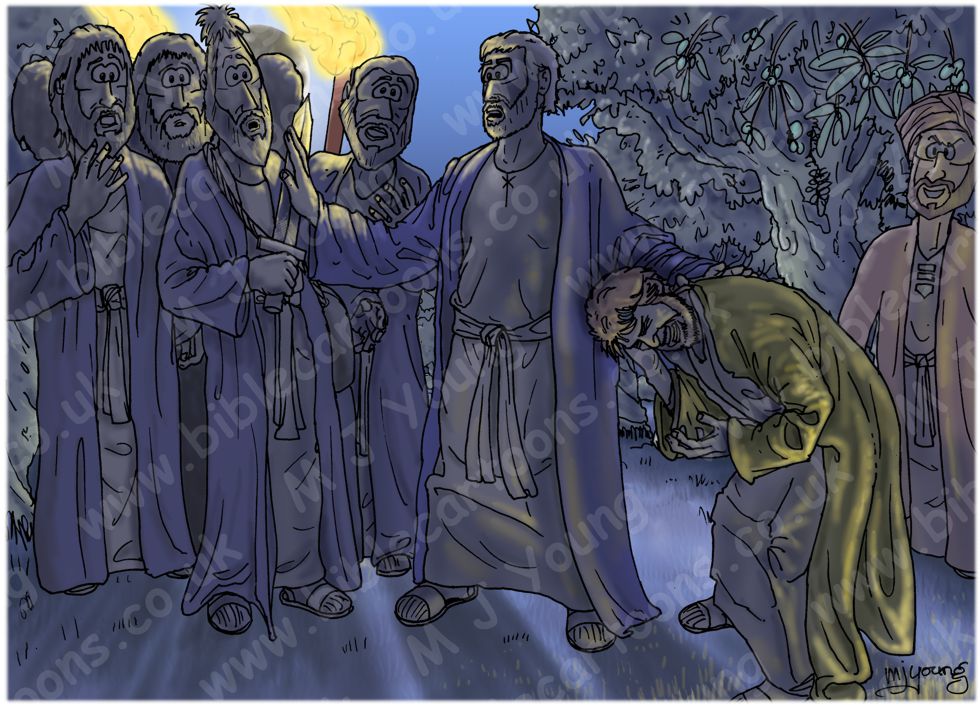 John 18:10-11 (NLT)
10 Then Simon Peter drew a sword and slashed off the right ear of Malchus, the high priest’s servant. 11 But Jesus said to Peter, “Put your sword back into its sheath. Shall I not drink from the cup the Father has given me?”

CHARACTERS PRESENT:
Jesus is standing between Malchus (bending over in pain as his ear has been cut off) and Simon/Peter, with his hand on the latter’s sword. Behind Simon/Peter (from left to right) are James (son of Zebedee), John (son of Zebedee), and Andrew. Behind them all are two unnamed disciples (carrying torches).
On the right of the scene is Judas Iscariot.

This scene occurs immediately after the previous scene, and shows Simon-Peter having just struck Malchus with his sword, cutting off his ear. Jesus is telling Simon/Peter to put up his sword.

I haven’t shown any of the surrounding Roman soldiers, temple guards, etc, as I wanted to focus the viewer’s attention on the scene. Some yellow torch light (seen reflected on Malchus, Jesus, Judas, etc) shows that these other people are nearby.

As with the previous scene, you can see olive trees (Olea europaea) in the background.