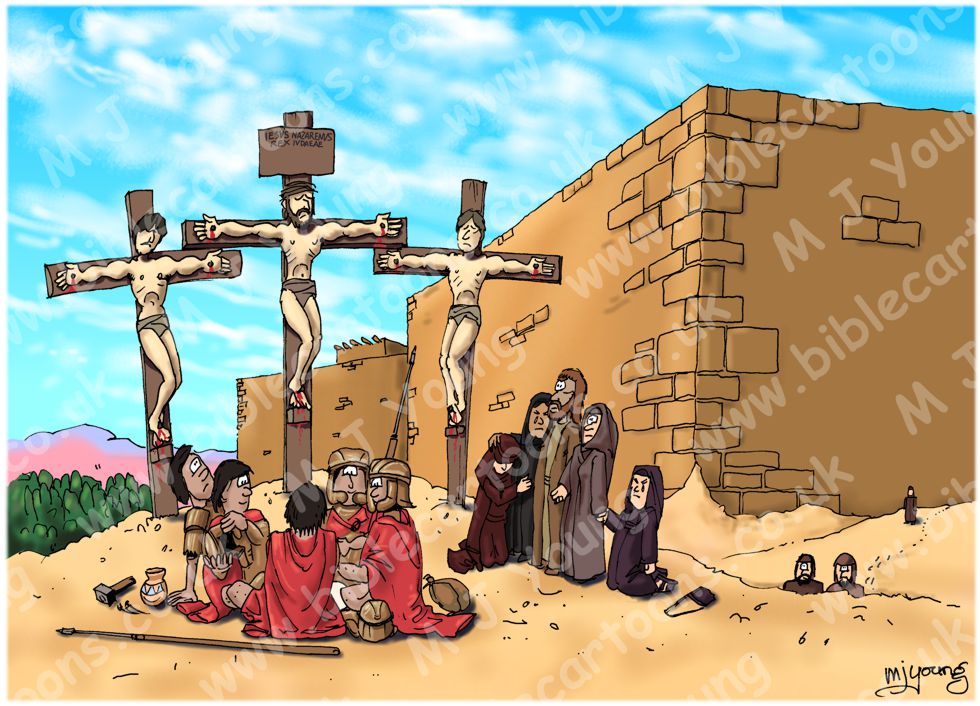 John 19:16b-27 (NLT)
The Crucifixion
[16b] So they took Jesus and led him away. 17 Carrying the cross by himself, Jesus went to the place called Skull Hill (in Hebrew, Golgotha).
18 There they crucified him. There were two others crucified with him, one on either side, with Jesus between them.
19 And Pilate posted a sign over him that read, “Jesus of Nazareth, the King of the Jews.” 20 The place where Jesus was crucified was near the city; and the sign was written in Hebrew, Latin, and Greek, so that many people could read it.
21 Then the leading priests said to Pilate, “Change it from `The King of the Jews’ to `He said, I am King of the Jews.’ “
22 Pilate replied, “What I have written, I have written. It stays exactly as it is.”
23 When the soldiers had crucified Jesus, they divided his clothes among the four of them. They also took his robe, but it was seamless, woven in one piece from the top. 24 So they said, “Let’s not tear it but throw dice [1] to see who gets it.” This fulfilled the Scripture that says, “They divided my clothes among themselves and threw dice for my robe.”2 So that is what they did.
25 Standing near the cross were Jesus’ mother, and his mother’s sister, Mary (the wife of Clopas), and Mary Magdalene. 26 When Jesus saw his mother standing there beside the disciple he loved, he said to her, “Woman, he is your son.” 27 And he said to this disciple, “She is your mother.” And from then on this disciple took her into his home.

LIGHTING NOTES:
There are few shadows, as it is 3pm, with a well lit sky.
There is no mention of a darkening sky in John’s account of the crucifixion, so I have kept it as a bright, hot day.

CHARACTERS PRESENT:
Jesus & 2 criminals on the 3 crosses.
There are 5 Roman soldiers: 1 centurion & 4 regular soldiers.
John son of Zebedee (the disciple whom Jesus loved), Mary Magdalene, Mary – the mother of Jesus, Mary the wife of Cleopas (Mary’s sister; aunt to Jesus) and an un-named woman can be seen near the crosses.
3 other onlookers are trailing off towards Jerusalem, to the right.

This is the first illustration that I have done of the Crucifixion.

Research has shown me that Golgotha was quite close to the walls of Jerusalem, so I have them in the background. Most TV/film’s about the crucifixion have the crosses standing alone out in the wilderness!

Many Bible commentators suggest that there are, in fact, only three Marys:
01) Mary – Mother of Jesus
02) Mary – Wife of Cleopas, sister of Mary, the mother of Jesus (aunt to Jesus)
03) Mary Magdelene

Unger’s Bible Dictionary has this to say on the subject…
“In answer to the alleged improbability of two sisters having the same name, it may be said that Miriam, the sister of Moses, may have been the holy woman after whom Jewish mothers called their daughters. This is on the hypothesis that the two names are identical, but on a close examination of the Greek text we find that it is possible that this was not the case. The virgin Mary is Mariam; her sister is Maria. Mary of Clopas was probably the elder sister of the Lord’s mother.”
[Source: New Unger’s Bible Dictionary. Emphasis added MY.]

After due thought, I’m going with that – three Marys. My scene therefore has an additional, un-named woman present… who isn’t named Mary… probably! 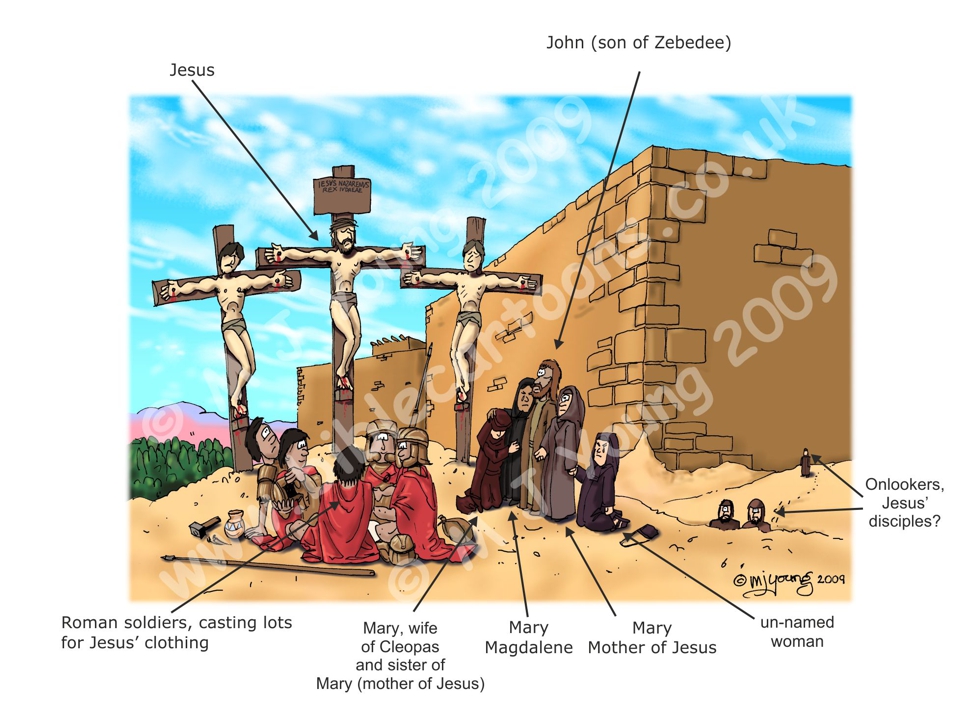