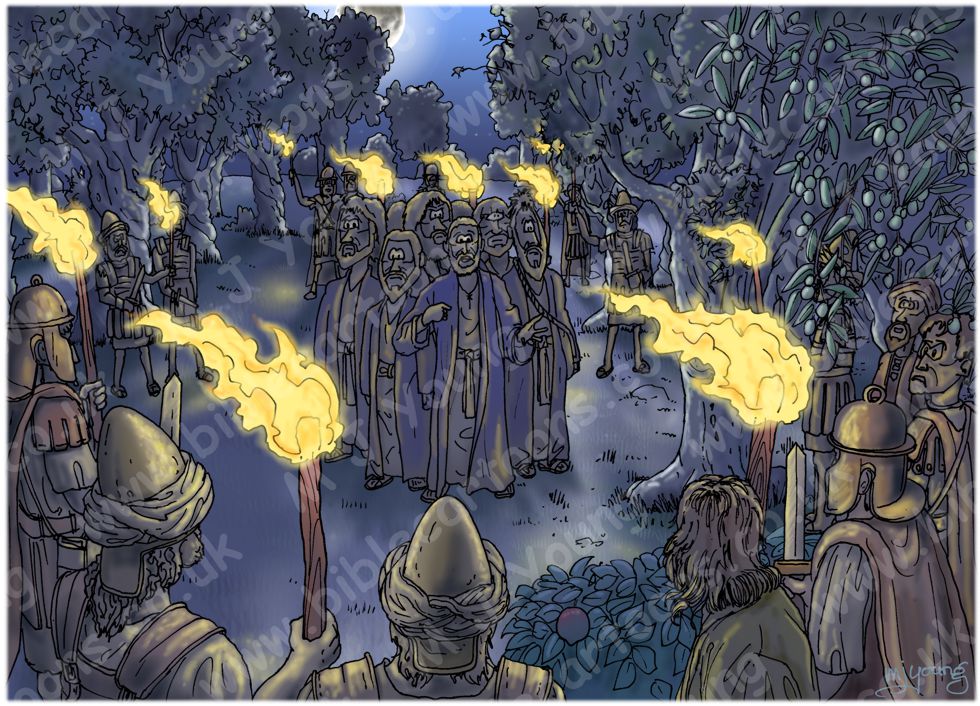 John 18:2-5 (NLT)
2 Judas, the betrayer, knew this place [the olive grove], because Jesus had gone there many times with his disciples. 3 The leading priests and Pharisees had given Judas a battalion of Roman soldiers and Temple guards to accompany him. Now with blazing torches, lanterns, and weapons, they arrived at the olive grove.
4 Jesus fully realized all that was going to happen to him. Stepping forward to meet them, he asked, “Whom are you looking for?”
5 “Jesus of Nazareth,” they replied.
“I am he”, [1] Jesus said. Judas was standing there with them when Jesus identified himself.

CHARACTERS PRESENT:
Jesus is standing in a small group of his disciples, surrounded by Roman soldiers, their officer, temple guards and Judas Iscariot.
Directly behind Jesus, from left to right is James (son of Zebedee and John’s brother), Andrew, John (son of Zebedee and Jame’s brother), James son of Alphaeus/Cleopas (carrying a torch), Simon/Peter.
Behind them are two unnamed disciples (carrying torches).

This scene occurs immediately after the previous scene, and shows the crowd arriving to arrest Jesus in the garden of Gethsemane. Jesus and his disciples have been surrounded by the arresting crowd. Notice that Jesus is pointing to himself, as he says “I am he”.

The Roman soldiers in my scene typically have leather armour, long crimson cloaks, metal helmets and swords. The temple guards have conical metal helmets with a cloth turban tied to the base and leather armour. Since the Romans were occupying Israel at this time, I’m not entirely sure they would have allowed the temple guards to possess swords, so I haven’t shown these guardsman with any!

In the foreground we can see (from left to right) a Roman soldier holding a sword and blazing torch. There are three temple guards, the last of which doesn’t have a helmet on his head. Then we see another helmeted Roman soldier with a sword, the Roman officer is next, looking disdainfully at Jesus and his disciples. Judas Iscariot is behind the Roman officer, just about to identify and betray Jesus with the kiss of greeting.
There are various Roman soldiers and temple guards around the central group of figures, hemming them in.

As with the previous scene, you can see olive trees (Olea europaea) surrounding the figures, and pomegranates (Punica granatum) growing on a bush in the foreground.