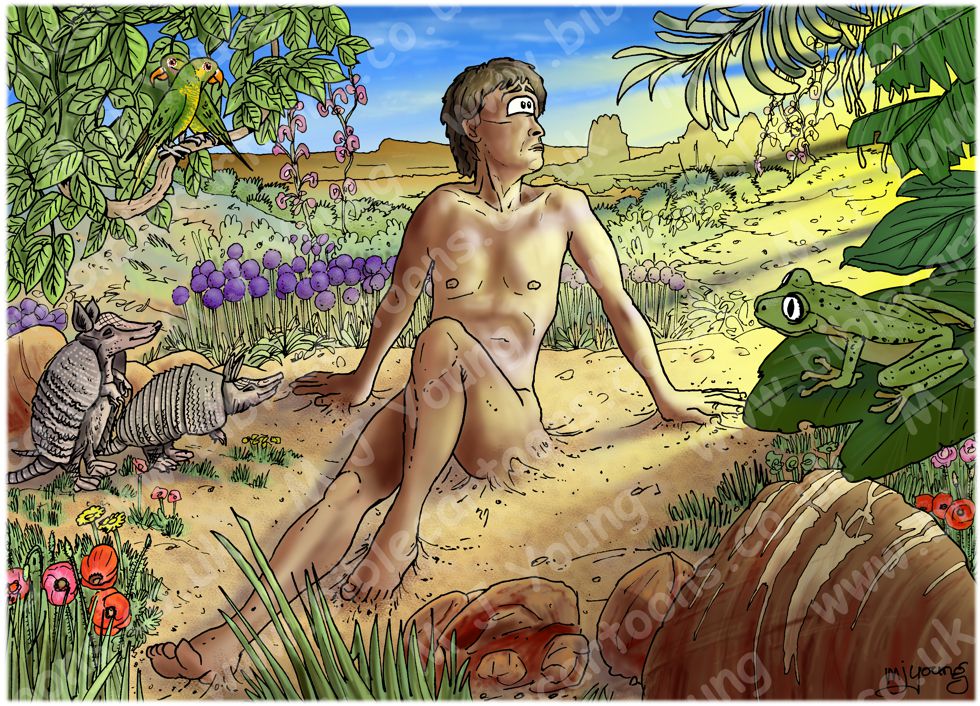 29 Then God said, “Look! I have given you every seed-bearing plant throughout the earth and all the fruit trees for your food. 30 And I have given every green plant as food for all the wild animals, the birds in the sky, and the small animals that scurry along the ground—everything that has life.” And that is what happened.

31 Then God looked over all he had made, and he saw that it was very good! And evening passed and morning came, marking the sixth day.

TIME OF DAY:
Indeterminate from the Bible verse. I have set this scene during the day.

LIGHTING NOTES:
Although the newly created sun provides light from above, the chief source of light comes from the Lord God, seen as a yellow light rays off to the right of the scene. That is who the newly made man (Adam) is looking in wonder at.

RESEARCH/ADDITIONAL NOTES:
This is the last in the 9 cartoon set of Genesis 01 – The first 7 days, or the days of creation.

In the first chapter of Genesis the account states that man & woman were made, whilst in chapter 2 greater detail is written. In Genesis 2:7 we read that God made the first man (Adam), ‘ Then the Lord God formed the man from the dust of the ground. He breathed the breath of life into the man’s nostrils, and the man became a living person.’ Then in verse 21-22 we read that woman was made from man, ‘So the Lord God caused the man to fall into a deep sleep. While the man slept, the Lord God took out one of the man’s ribs and closed up the opening. Then the Lord God made a woman from the rib, and he brought her to the man.’

In this Bible Cartoon I have shown God having just made man out of the dust & breathed life into him. Adam is sitting up & turning to look at the Lord God, who is represented by the strong yellow light off to the right. Notice in my picture that the sand/soil particles are still coming together to form the man’s fingers, feet, etc, evan as he is waking up to his new life.

The 2 pink & grey creatures on the left of the scene are Nine-banded armadillo (aka nine-banded, long-nosed armadillo) (Dasypus novemcinctus.)

The frog on the right of the scene, sitting on a leaf is a Lemur Leaf Frog (Hylomantis lemur.)

The 2 birds, perched on the tree in the top left are Citrine Lorikeet (aka Yellow-and-green Lorikeet) (Trichoglossus flavoviridis)


Bible Doctrine Notes
1:26-29 HUMANITY, Image of God (2.41A)
Human beings were created in the image of God. This includes authority over, and responsibility for, the natural world. The image of God may also be shown in the relationship between man and woman, since God is revealed through the loving commitment of one person for another.

1:26-28 REVELATION, Author of life (3.22B)
The culmination of God’s creation was the making of man, and then woman. On them alone did God bestow His image (Hebrew em>tselem, meaning likeness, image of same). Human beings reflect and reveal the likeness of God Himself: His nature and characteristics. Human beings were designed to take the untames creation and subdue and direct it as God would.

1:26-31 STEWARDSHIP, Management (4.51A)
God’s creation is good and it therefore reflects God’s nature of goodness. God made people to represent Him and His nature in the world; we hold a special place of importance, authority and service in God’s perfect plan. We are here to manage and steward God’s creation. Under God’s authority we are to serve Him and fulfill His purpose in our lives. Being a manager for God is the central foundation of stewardship.
Sin distorts our likeness to God, corrupts God’s perfect order and causes us to try to usurp God’s ownership and authority.