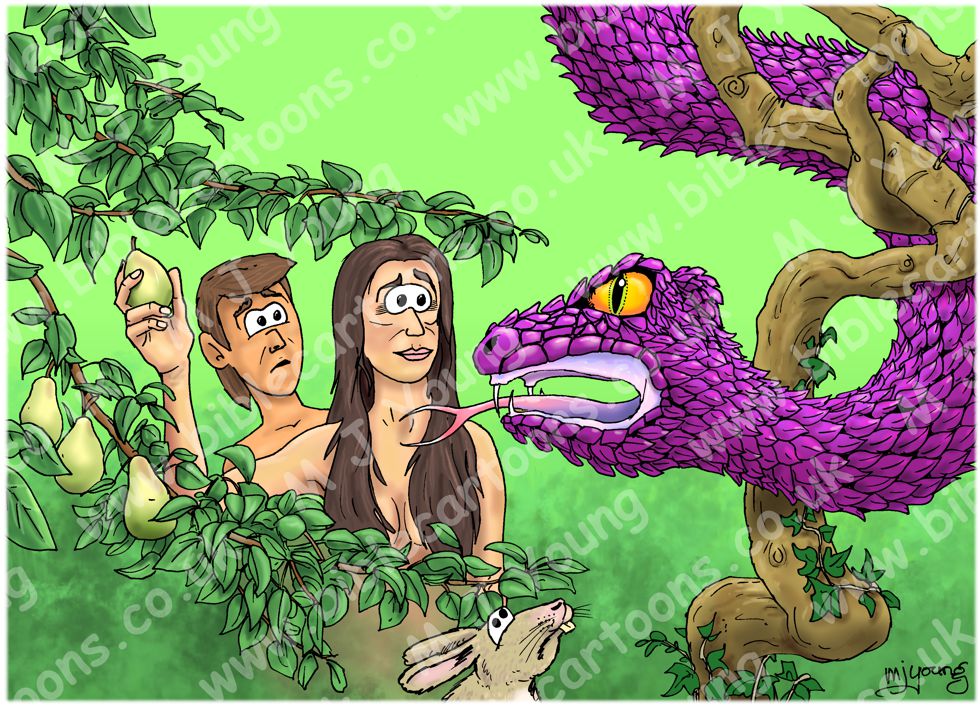 Genesis 3:2-5 (NLT)
2 “Of course we may eat fruit from the trees in the garden,” the woman replied. 3 “It’s only the fruit from the tree in the middle of the garden that we are not allowed to eat. God said, ‘You must not eat it or even touch it; if you do, you will die.’”
4 “You won’t die!” the serpent replied to the woman. 5 “God knows that your eyes will be opened as soon as you eat it, and you will be like God, knowing both good and evil.”

LIGHTING NOTES:
Simple, diffused lighting from above lights this scene.

RESEARCH/ADDITIONAL NOTES:
There are two versions of this scene:
01) (This page) Genesis 03 – The Fall of Man – Scene 02 – Serpent seduction (Purple version).

The only difference between these two versions is the colour of the snake.

This scene shows the serpent (see verse 1) talking to Eve. She is reaching up to the forbidden fruit and has just plucked a piece from the tree of the knowledge of good and evil (Genesis 2:17).

As various Bible commentaries point out, although in body it was a real snake, in fact the intelligence guiding it and giving it a voice was that of the Devil or Satan.

The enemy of all of us human beings did some of his most awful work right there in the garden of Eden. The outcome of that single conversation between Eve and the snake has brought all the evils and woes upon our world. The serpent questioned Eve regarding the goodness of God and then flatly denied the divine command by telling her “You won’t die!” In this way Satan insinuated a doubt as to Eve’s sense of the divine will and offering to lead her to the “true interpretation” of God’s command; how subtle a twist of the truth the Devil employs. I suppose that Eve’s reaction of trust and acceptance of a talking snake (surely not something she had encountered before!) could be interpreted as her receiving him as a heavenly messenger. It would have been much better for us all if she had been startled by the speaking serpent and gave it no attention at all. Alas, that was not to be.

I have drawn Adam behind Eve, because verse 6 confirms his presence: Then she gave some to her husband, who was with her,… many Bible commentators have blamed Eve for the first sin, but Adam was just as capable of saying “yes” or “no” to the fruit and therefore the temptation. He isn’t credited with saying anything, nor of protesting in any way, so I guess that makes Adam just as culpable as Eve.

I enjoyed colouring up the snake’s scales in both versions of this scene, even though he is the ultimate “baddie”!

I’ve included a European hare (also known as the brown hare) (Lepus europaeus), looking up at the snake, just for fun!

The fruit being picked is European pear or common pear (Pyrus communis).


Bible Doctrine Notes
3:1-13 EVIL AND SUFFERING, Human Origin (2.31C)
The origin of the serpent’s wickedness is not expressly explained in this passage. The serpent questioned the relationship between sin and death (3:4) which had already been expressly communicated by God to Adam and Eve (2:17). Adam and Eve thus already had knowledge of what was right and wrong, since God had declared it to them in the command not to eat of the fruit of good and evil. Eating the fruit was the first instance of human disobedience recorded in the Bible, and these sinful actions allowed evil and suffering to enter human history. God alone has the right (and wisdom!) to determine what is good and what is evil.

3:4-24 SIN, Death (2.54F)
Sin was introduced first into human history at this point in the narrative. The serpent tempted Eve to disregard God’s command not to eat the fruit of the tree of the knowledge of good and evil. The serpent clouded the consequences of eating the fruit with a refutation “you will not surely die”, which was a direct contravention of God’s command and stated consequence of doing so. Although Adam and Eve did not die immediately, nevertheless evil, sin and spiritual death (separation from God) were introduced into human history by this act of disobedience, and Adam and Eve did eventually physically die.
The account does not say that God introduced sin into history, nor does it state that the serpent’s beguiling words achieve that end. Sin’s origin is to be found in the rebellious actions of Adam and Eve. Not only did their disobedience affect them, their sinful actions affected the natural world; “cursed is the ground because of you” (3:17) as well. Since the time of Adam and Eve sin and death have plagued humanity and all of the creation.