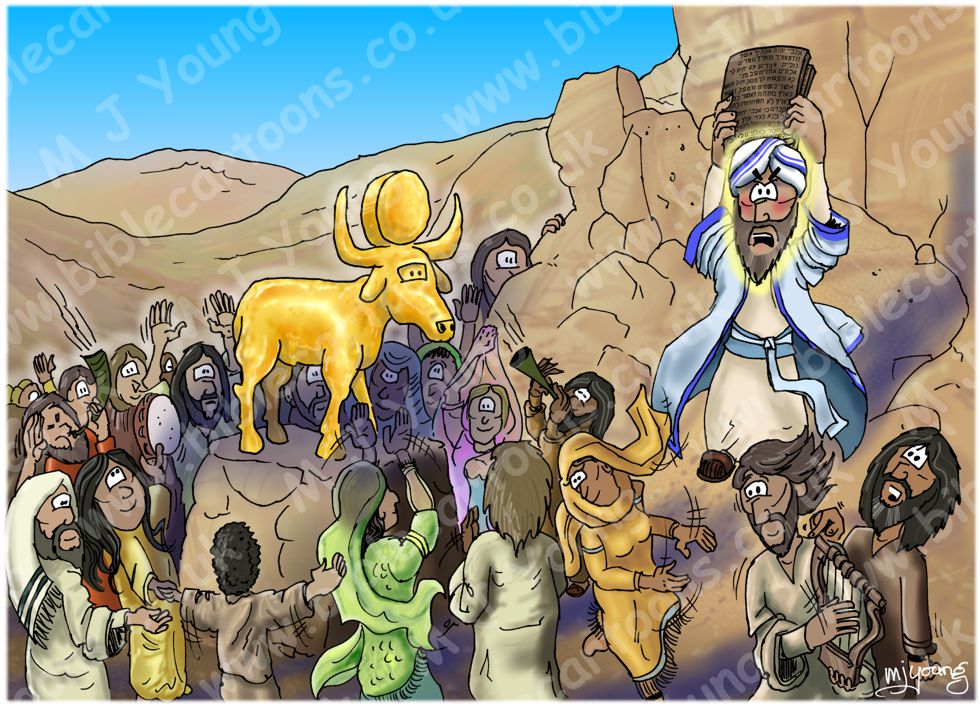 Exodus 32:1-35 (NLT)
The Gold Calf
1 When the people saw how long it was taking Moses to come back down the mountain, they gathered around Aaron. “Come on,” they said, “make us some gods who can lead us. We don’t know what happened to this fellow Moses, who brought us here from the land of Egypt.”
2 So Aaron said, “Take the gold rings from the ears of your wives and sons and daughters, and bring them to me.”
3 All the people took the gold rings from their ears and brought them to Aaron.

4 Then Aaron took the gold, melted it down, and molded it into the shape of a calf. When the people saw it, they exclaimed, “O Israel, these are the gods who brought you out of the land of Egypt!”
5 Aaron saw how excited the people were, so he built an altar in front of the calf. Then he announced, “Tomorrow will be a festival to the Lord!”

6 The people got up early the next morning to sacrifice burnt offerings and peace offerings. After this, they celebrated with feasting and drinking, and they indulged in pagan revelry.

7 The Lord told Moses, “Quick! Go down the mountain! Your people whom you brought from the land of Egypt have corrupted themselves. 8 How quickly they have turned away from the way I commanded them to live! They have melted down gold and made a calf, and they have bowed down and sacrificed to it. They are saying, ‘These are your gods, O Israel, who brought you out of the land of Egypt.’”
9 Then the Lord said, “I have seen how stubborn and rebellious these people are. 10 Now leave me alone so my fierce anger can blaze against them, and I will destroy them. Then I will make you, Moses, into a great nation.”
11 But Moses tried to pacify the Lord his God. “O Lord!” he said. “Why are you so angry with your own people whom you brought from the land of Egypt with such great power and such a strong hand? 12 Why let the Egyptians say, ‘Their God rescued them with the evil intention of slaughtering them in the mountains and wiping them from the face of the earth’? Turn away from your fierce anger. Change your mind about this terrible disaster you have threatened against your people!
13 Remember your servants Abraham, Isaac, and Jacob. [1] You bound yourself with an oath to them, saying, ‘I will make your descendants as numerous as the stars of heaven. And I will give them all of this land that I have promised to your descendants, and they will possess it forever.’”
14 So the Lord changed his mind about the terrible disaster he had threatened to bring on his people.

15 Then Moses turned and went down the mountain. He held in his hands the two stone tablets inscribed with the terms of the covenant. [2] They were inscribed on both sides, front and back. 16 These tablets were God’s work; the words on them were written by God himself.
17 When Joshua heard the boisterous noise of the people shouting below them, he exclaimed to Moses, “It sounds like war in the camp!”
18 But Moses replied, “No, it’s not a shout of victory nor the wailing of defeat. I hear the sound of a celebration.”

19 When they came near the camp, Moses saw the calf and the dancing, and he burned with anger. He threw the stone tablets to the ground, smashing them at the foot of the mountain.

20 He took the calf they had made and burned it. Then he ground it into powder, threw it into the water, and forced the people to drink it.

21 Finally, he turned to Aaron and demanded, “What did these people do to you to make you bring such terrible sin upon them?” 22 “Don’t get so upset, my lord,” Aaron replied. “You yourself know how evil these people are.
23 They said to me, ‘Make us gods who will lead us. We don’t know what happened to this fellow Moses, who brought us here from the land of Egypt.’ 24 So I told them, ‘Whoever has gold jewelry, take it off.’ When they brought it to me, I simply threw it into the fire—and out came this calf!”

Note on Exodus 25:16.
Hebrew, Place inside the Ark the Testimony; similarly in 25:21. The Hebrew word for “Testimony” refers to the terms of the Lord’s covenant with Israel as written on stone tablets, & also to the covenant itself.

RESEARCH/ADDITIONAL NOTES:
Google earth position & orientation – 28 deg 33’ 08.39” N 33 deg 58’ 42.44” E Looking due S. The summit of mt. Sinai has a google earth yellow placement marker on it!
Although I used this view from google earth as the basis of this cartoon (with an identical background), the foreground has been changed to show a close up of the mountain rocks & a path that goes off towards the summit of mt. Sinai.

I looked up the Hebrew text for the 10 commandments & have managed to write all of the first 2 on the top stone tablet, in Hebrew!

I research Hebrew dancing on the internet & found examples of several people engaged in it: used those images to help me to draw the dancing figures in my cartoon.

This is the first time I have attemted to draw gold. Use of contrasting light & dark yellow, orange, brown shades are effective. Highlight in white makes the gold look shiny.

This is the first cartoon that i have drawn that has Moses in it. I am also currently colouring the Transfiguration, from Luke 9. The 3rd scene has Moses in it, so the colouration I have created in the Golden calf can be directly applied to that scene as well.