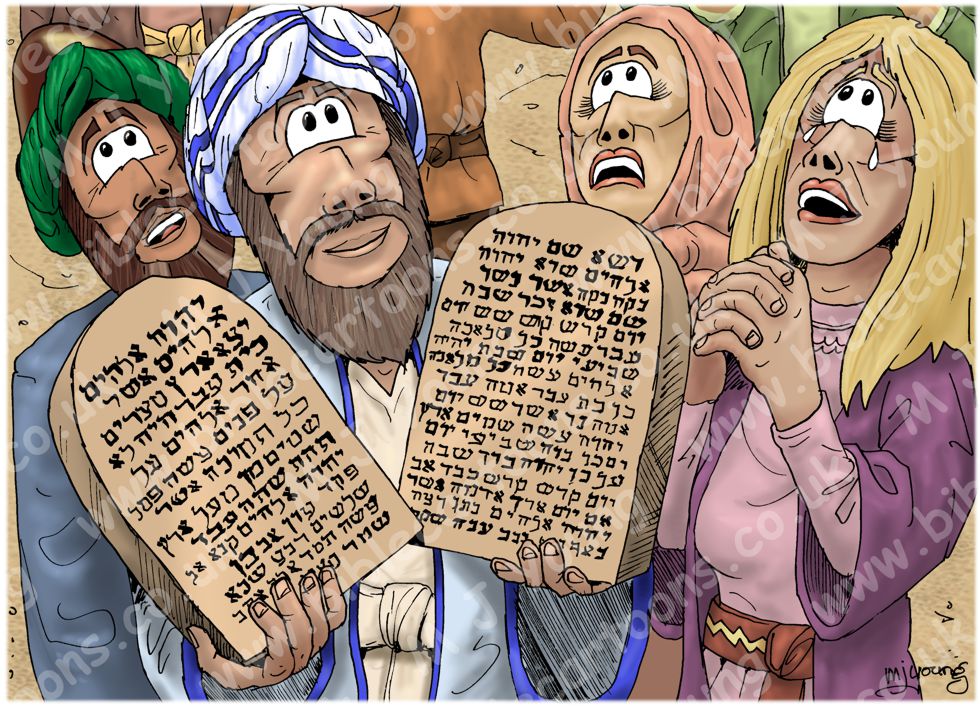 Exodus 32:15-18 (NLT)
Then Moses turned and went down the mountain. He held in his hands the two stone tablets inscribed with the terms of the covenant. [1] They were inscribed on both sides, front and back. These tablets were God’s work; the words on them were written by God himself.
When Joshua heard the boisterous noise of the people shouting below them, he exclaimed to Moses, “It sounds like war in the camp!”
But Moses replied, “No, it’s not a shout of victory nor the wailing of defeat. I hear the sound of a celebration.”

Note on Exodus 25:16.
Hebrew, Place inside the Ark the Testimony; similarly in 25:21. The Hebrew word for “Testimony” refers to the terms of the Lord’s covenant with Israel as written on stone tablets, & also to the covenant itself.

TIME OF DAY:
Verse 6 tells us, “The people got up early the next morning…” So this scene is at that time.

LIGHTING NOTES:
Light from above illuminates the figures in this scene.

CHARACTERS PRESENT:
From left to right: Joshua (son of Nun), Moses, 2 unnamed women.
There are also figures in the background.

RESEARCH/ADDITIONAL NOTES:
There are two versions of this scene:
01) (This page) Exodus 32 – Gold calf – Scene 05 – Stone tablets (Hebrew). The 10 commandments are written in Hebrew script on the 2 tablets of stone.

02) (Next page) Exodus 32 – Gold calf – Scene 05 – Stone tablets (English). The 10 commandments are written in English on the 2 tablets of stone. This is merely to make it easier for English speakers to read what the tablets say! The tablets would probably have written in early Hebrew script.