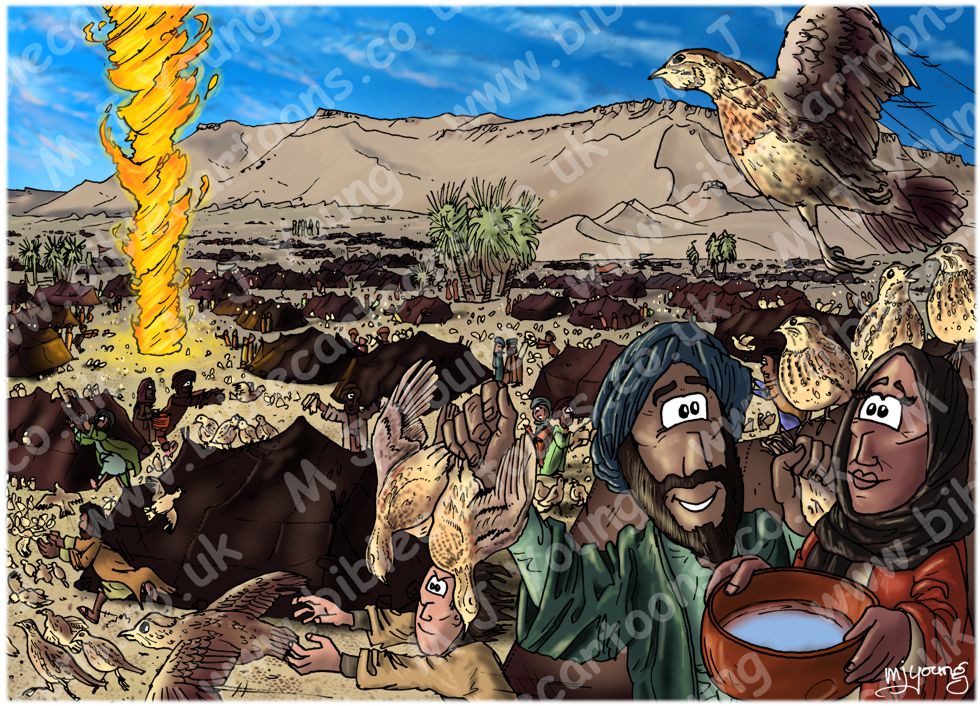 Exodus 16:13a (ANIV)
That evening quail came and covered the camp,…

TIME OF DAY:
The verse tells us it was in the evening.

LIGHTING NOTES:
Sunlight, from the setting sun & yellow light from the column of fire are illuminating the scene, both on the left of the illustration.

CHARACTERS PRESENT:
Some Hebrew people. Many are running around, catching Quail!

The dark brown humps are tents! I based my design on photographs of African, nomadic Bedouin tents.

Quail is a collective name for several genera of mid-sized birds in the pheasant family Phasianidae.

I have chosen to include the Common Quail (Coturnix coturnix) in this illustration, which is a small 6.7 inch (17 cm) rotund bird. It is difficult to see, as it keeps hidden in crops, grasses and bushy vegetation. It typically eats seeds & insects. Quail are reluctant to fly, preferring to creep away instead. Even when Quail take to the air, it keeps low and soon drops back into cover. This low flying feature of Quail explains what we read in another part of the Bible: in the book of Numbers, chapter 11, verse 31 (NLT) it says, ‘Now the LORD sent a wind that brought quail from the sea and let them fall into the camp and all around it! For many miles in every direction from the camp there were quail flying about three feet above the ground.’

Common Quail have a streaked brown, fawn & red-brown colouration with a white eyestripe, and, in the male, a white chin. Quail migrate, & have long wings, unlike other typically short-winged gamebirds. It is a strongly migratory bird, found in parts of Europe, Asia and Africa.

For a good explanation of quail see in Biblical references – http://www.zoocreation.com/biblespecies/quail.html


Bible Doctrine Notes
16:13 MIRACLE, Nature (2.23A)
God provided for the Hebrew people using naturally occurring elements. The manna followed the appearance of the dew; the quail were blown in by the wind. Some Bible commentators have tried to identify the manna as the sweet juice coming from the tamarisk, which forms small round grains. Verse 31 offers comparison to coriander seed. Even if this were correct, the miracle would be in the regularity, the amount, and the necessity of the obedience of the Hebrew people in collecting it in measured amounts. Miracles do not have to transcend the laws of nature. It is just as divinely miraculous for God to use nature to meet the needs of His chosen people in a particular setting, facing a particular need, in particular quantity, in a particular timescale.
Another possibility is that God creatively intervened in His created order to provide special food for His people in a particular historical setting and timescale. Either way, the miracle is God’s provision for His people, at their time of need, for the duration of their need. The “how” is up to God‘s own choice to operate in His creation as He chooses. The importance for us is to recognise God’s grace and mercy in saving His people.