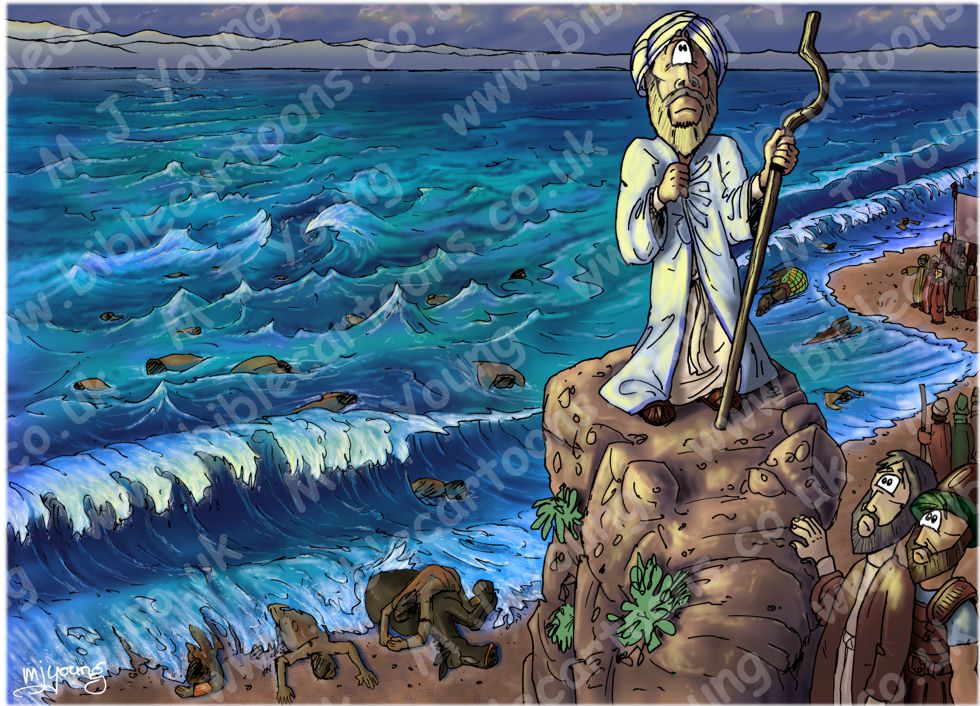 Exodus 14:29-31 (ANIV)
29 But the Israelites went through the sea on dry ground, with a wall of water on their right and on their left. 30 That day the Lord saved Israel from the hands of the Egyptians, and Israel saw the Egyptians lying dead on the shore. 31 And when the Israelites saw the great power the Lord displayed against the Egyptians, the people feared the Lord and put their trust in him and in Moses his servant.

TIME OF DAY:
Verse 27 tells us that the scene is set at dawn. I have included some strong yellow sunlight on Moses (the figure standing on the rock) Aaron & Joshua (bottom right) & on the crests of some of the sea waves. The sun is coming up behind the viewer, in the east.

LIGHTING NOTES:
The lighting style & colours are taken from the previous cartoons, again with stronger colours (more greens & lighter blues in the sea) introduced in this scene, which is a result of the sun coming up behind the viewer.

CHARACTERS PRESENT:
Moses (the figure standing on the rock) Aaron & Joshua Joshua (son of Nun) (see bottom right of picture).
Various Hebrew people can be seen on the sea shore, on the right of the scene.
Various drowned Egyptian men & two horses can be seen, being washed up on the shore & floating in the water.

RESEARCH/ADDITIONAL NOTES:
This is the last scene in the 14 cartoon set that forms the Parting of the Red Sea series.

This scene uses all the colours & tones I’ve used in the previous scenes, with added yellow sunlight tones. Again I’ve added more substantial greens into the sea water, rather than just keeping the cooler blue hues. That reflects the fact that the sun is adding even more light (& hence colour) to the whole scene.

It was quite sad drawing & colouring up all those bodies in the water, but verse 30 clearly states, “and Israel saw the Egyptians lying dead on the shore”, so I felt obliged to show them. I decided not to show Pharaoh himself on the shore, or in the water, it is enough to note that all the Egyptians who came through the parted Red Sea drowned. As I noted in the previous scene, it really was Pharaoh’s pride which eventually killed both him & every soldier that went with him.

I decided to make the Hebrew figures look solemn rather than happy or gleeful at the demise of their Egyptian pursuers. The Bible doesn’t tells us their reaction to seeing all those Egyptians drown, it simply says, “the people feared the Lord and put their trust in him and in Moses his servant.” Undoubtedly they were enormously relieved that they had managed to safely get through the walls of sea water miraculously standing on either side of them. Equally it must have been very scary, having set off through those waters, to realise that the Egyptian army was then in hot pursuit of them. I believe the Hebrew people were probably grateful that they had come through the waters safely, but took no pleasure in seeing the Egyptian army drowned by the returning sea water.


Bible Doctrine Notes
14:29-31 HISTORY, Faith (3.33A)
God’s participation in history is not recognised by all people. God often uses an interpreter (such as Moses, in this case) to announce His actions in history and to explain His intentions. Only by faith do people accept God’s involvement in history. Without faith, people merely see natural causes for the events in history. Biblical writers looked beyond the natural cause to the ultimate Cause. Human eyes see military victory, the eyes of faith see divine salvation.