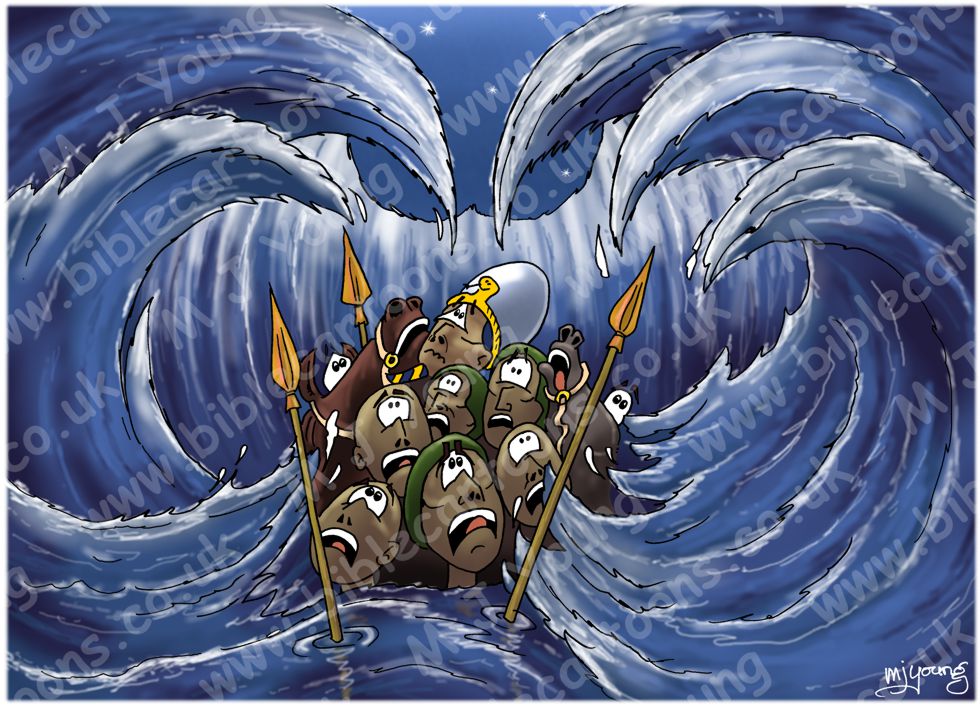 Exodus 14:28 (ANIV)
The water flowed back and covered the chariots and horsemen—the entire army of Pharaoh that had followed the Israelites into the sea. Not one of them survived.

TIME OF DAY:
Verse 27 tells us that the scene is set at dawn, although, at this particular moment, you can’t see the sun, because of all the sea water!

LIGHTING NOTES:
The lighting style is taken from the previous cartoons, but with slightly stronger, yellow/white sunlight beginning to permeate the sea water in this scene, resulting in stronger greens & lighter blues showing in it, rather than the cooler & deep blues that characterise the earlier scenes.

CHARACTERS PRESENT:
I deliberately positioned the various Egyptian men in this scene to form a triangle of people & horses, with Pharaoh (the king of the Egyptians) at the top. Below him are various Egyptian charioteers & soldiers, with three horses. All are looking terrified by the walls of sea water about to engulf them.

RESEARCH/ADDITIONAL NOTES:
This scene uses all the colours & tones I’ve used in the previous scenes, to show the walls of sea water surrounding the Egyptian soldiers. I’ve added some more substantial greens into the sea water, rather than just keeping the blue hues. That reflects the fact that the sun is adding even more light (& hence colour) to the whole scene.
I put Pharaoh at the top of the triangle of figures as he was at the top of the social & political leadership of Egypt. It was also his pride which got all those Egyptian soldiers into the fix they were now facing! Had he not been full of his own importance, he might not have ordered his army to pursue the Hebrew people, & then these Egyptian charioteers & soldiers would not have gone into the parted Red Sea. It really was Pharaoh’s pride which eventually killed both him & every soldier that went with him. As the Bible says in the Book of Proverbs, chapter 16 & verse 18, “Pride goes before destruction, and haughtiness before a fall.” (NLT)
I like the Message Bible version of that which reads: “First pride, then the crash— the bigger the ego, the harder the fall.” Pharaoh’s ego/pride certainly cost him & his entire army’s lives at this time.