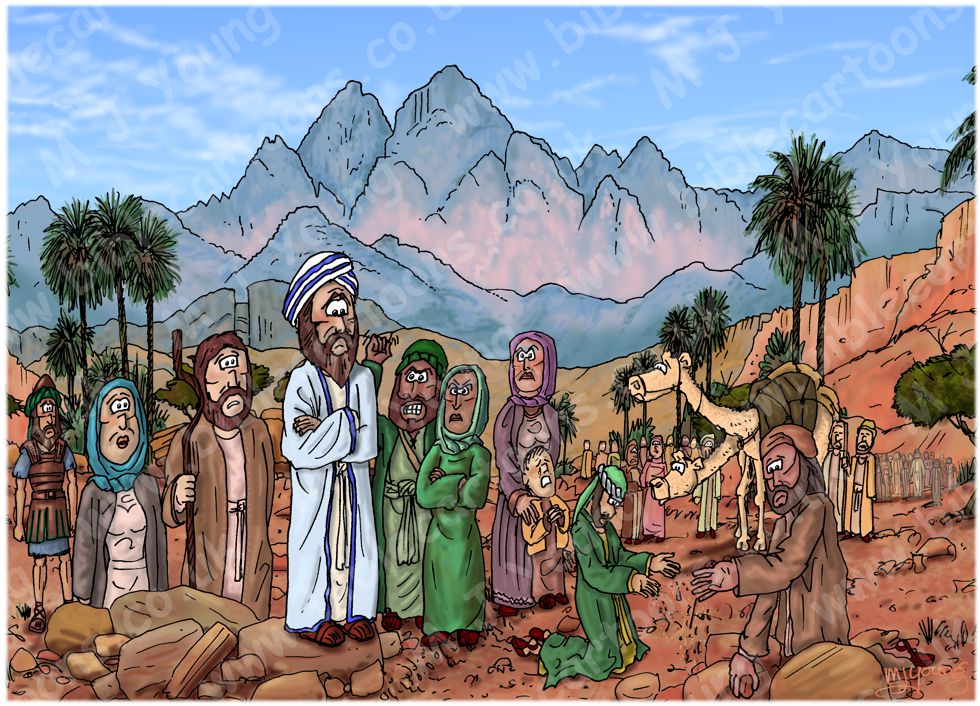 Exodus 17:1 (ANIV)
The whole Israelite community set out from the Desert of Sin, travelling from place to place as the Lord commanded. They camped at Rephidim, but there was no water for the people to drink.

LIGHTING NOTES:
Sunlight (above & behind the viewer) illuminates this scene.

RESEARCH/ADDITIONAL NOTES:
This scene takes place at Rephidim, although Bible scholars are not entirely certain where that was. Refering to the International Standard Bible Encyclopedia & Smith’s Bible Dictionary (see below), I have based the scene on Wady Feiran which is Sinai’s largest and widest wadi (a valley, ravine, or channel that is dry except in the rainy season). I found a dramatic photograph of the region 9the mountains in the background) & used that as the basis of my scene, then added a dry river bed in the foreground. I included the colours of the rocks which I established in Scene 04 – Striking the rock (which I drew in June 2011), so that the scenes would be similar despite the long time between their creation!

The tall trees in the background are Palms (Arecaceae) & the shorter, flatter ones are a species of Acacia (aka mimosa, acacia, thorntree or wattle, in the subfamily Mimosoideae of the family Fabaceae).

The camels are being used as beasts of burden to transport the goods of the Hebrew people through the desert. A camel is an even-toed ungulate in the genus Camelus that bears distinctive fatty deposits known as “humps” on its back.

REPHIDIM
(rephidhim, “rests”; Rhaphidín): A station in the Wanderings, between the wilderness of Sin and the wilderness of Sinai (Exodus 17:1, 8; Exodus 19:2; Numbers 33:14). The host expected to find water here; to their distress the streams were dry, and water was miraculously provided. Palmer (Desert of the Exodus, 158ff) states cogent reasons for identifying Rephidim with Wady Feiran. It is the most fertile part of the peninsula, well watered, with a palm grove stretching for miles along the valley. Palmer speaks of passing through the palm grove as a “most delightful” walk; “the tall, graceful trees afforded a delicious shade, fresh water ran at our feet, and, above all, bulbuls flitted from branch to branch uttering their sweet notes.” His camp was pitched at “the mouth of Wady `Aleyat, a large open space completely surrounded by steep, shelving mountains of gneiss, the fantastic cleavage of which added greatly to the beauty of the scene. Palms and tamarisks were dotted all around, and on every knoll and mountain slope were ruined houses, churches, and walls, the relics of the ancient monastic city of Paran. Behind our tents rose the majestic mass of Serbal, and beneath the rocky wall opposite ran a purling brook, only a few inches in depth, but still sufficiently cool, clear, and refreshing.”
Such a place as this the Amalekites would naturally wish to preserve for themselves against an invading people. For these desert dwellers, indeed, the possession of this watered vale may well have been a matter of life and death.
If this identification is correct, then Jebel Tachuneh, “Mount of the mill,” a height that rises on the North of the valley, may have been the hill from which Moses, with Aaron and Hur, viewed the battle.
—W. Ewing
[Source: International Standard Bible Encyclopedia]

Rephidim Reph’idim. Exod 17:1, 8; 19:2 The name means rests or stays, i.e. resting places. The place lies in the march of the Israelites from Egypt to Sinai. Its site is not certain, but it is perhaps Wady Feiran, a rather broad valley about 25 miles from Jebel Musa (Mount Sinai). Others place it in Wady es Sheikh, an eastern continuation of Feiran, and about 12 miles from Sinai. Here the Israelites fought their first battle and gained their first victory after leaving Egypt, the Amalekites having attacked them; here also the people murmured from thirst, and Moses brought water for them out of the rock. From this murmuring the place was called “Massah” and “Meribah.” 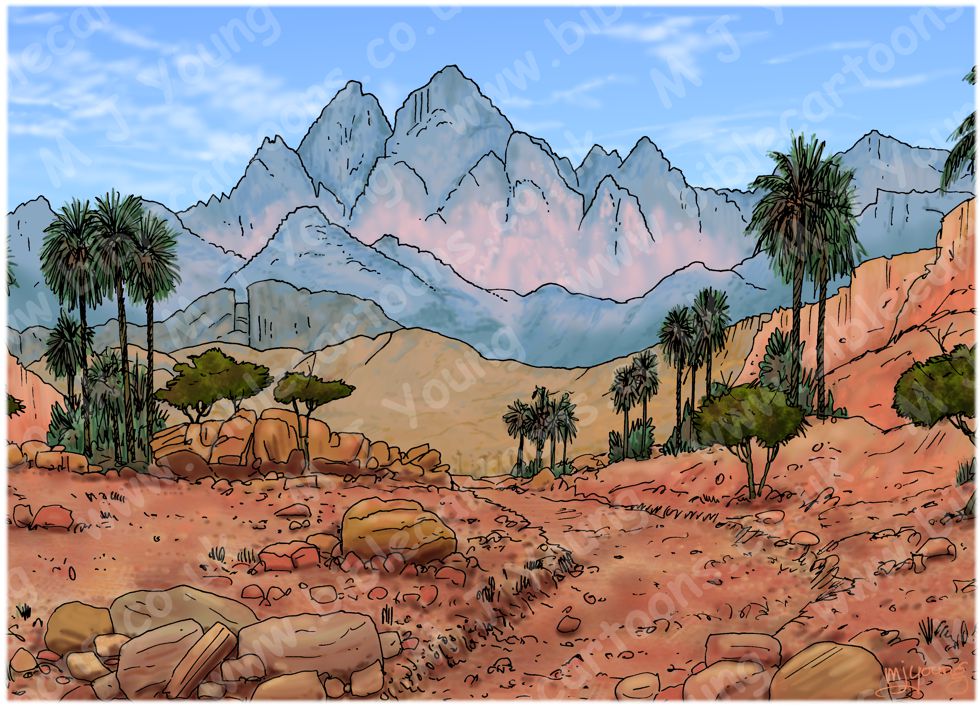