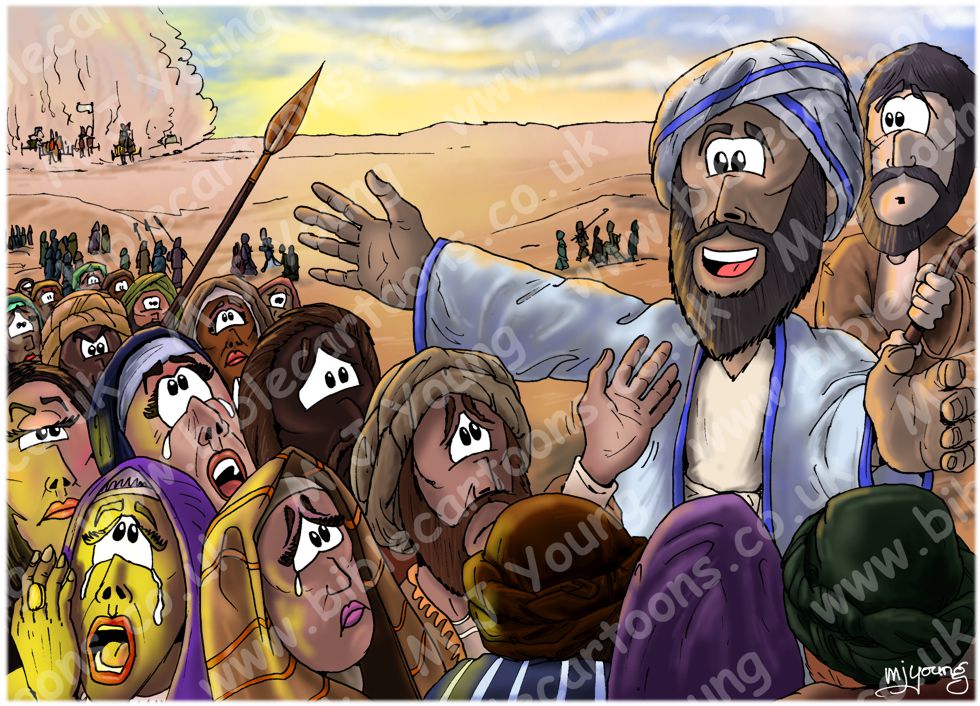 Exodus 14:10-14 (ANIV)
10 As Pharaoh approached, the Israelites looked up, and there were the Egyptians, marching after them. They were terrified and cried out to the Lord. 11 They said to Moses, “Was it because there were no graves in Egypt that you brought us to the desert to die? What have you done to us by bringing us out of Egypt? 12 Didn’t we say to you in Egypt, ‘Leave us alone; let us serve the Egyptians’? It would have been better for us to serve the Egyptians than to die in the desert!”
13 Moses answered the people, “Do not be afraid. Stand firm and you will see the deliverance the Lord will bring you today. The Egyptians you see today you will never see again. 14 The Lord will fight for you; you need only to be still.”

TIME OF DAY:
Late afternoon, with the sun setting on the horizon.

LIGHTING NOTES:
There are two sources of light in this scene, the setting sun bathes warm orange red light into the scene, with flickering torch light adding a yellow glow to the left, foreground figures.

CHARACTERS PRESENT:
Moses, in blue gown holding up his hands in reassurance of the terrified Hebrew people. Aaron is behind Moses, holding his staff, looking a bit more apprehensive!
Pharaoh and his army are in the distance, racing towards the Hebrew people.

RESEARCH/ADDITIONAL NOTES:
This is a scene that uses no photo reference, and made up from my imagination. I have used colours taken from my previous cartoon illustrations in this series.


Bible Doctrine Notes
14:10 PRAYER, Mercy of God (5.51B2)
Prayer is appropriate in every mood, situation and circumstance of life. Israel cried out in terror to God, who heard their cry of oppression and fear and provided merciful direction and escape.

14:11-12 SIN, Lack of Faith (2.53D)
The Hebrew people exhibited a lack of faith when they cringed in fear of Pharaoh and his army. Though God had led them up to this point, in their time of fear, their faith in Him wavered and they feared God had forsaken them. Failure to trust God is the root of all sin.

14:13 HISTORY, God (3.36A)
Despite the fear and unbelief of His people, still God works through us and throughout history. God acts to fulfil His divine purpose; to accomplish His will; to make His name great and glorious, and to elicit faith in His people. The historical initiative remains with God.

14:13 SALVATION, Initiative (4.22B)
The Exodus was the greatest example of God’s saving action in history in the Old Testament. The word “saved” (Hebrew em>hoshia’) is also the root word for “deliverance” means “to be wide and spacious” or “to develop without hindrance”, signifying freedom or victory. In verse 13 it referred to God’s victory over Pharaoh and the freedom Israel gained through deliverance from Egyptian slavery. The important point here is the victory of God, not the drowning of the Egyptians. This important victory established God’s Lordship beyond dispute.
Salvation is the wok of God; beyond Him there is no Saviour (see Isaiah 43:11; Jeremiah 14:8; Hosea 13:4). The Exodus points beyond itself to God’s saving action and initiative in history. It became the basis for the hope that one day He would complete what He had started. That day came when Jesus, the One greater than Moses, led the new Exodus, delivering us from our bondage to sin (See Hebrews 3:3).