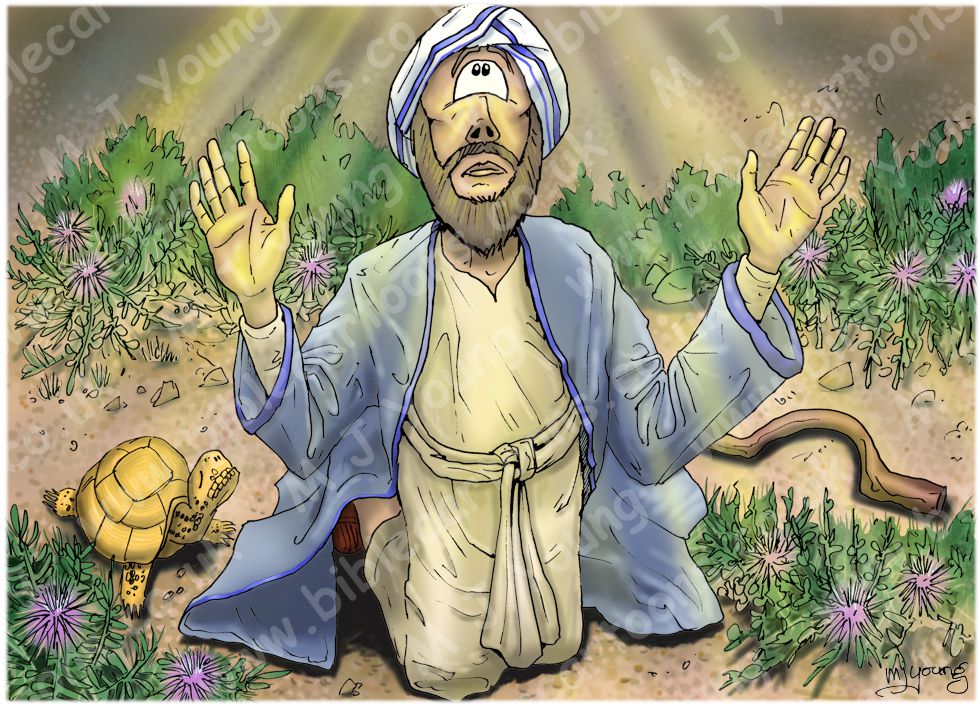 Exodus 14:15-18 (ANIV)
15 Then the Lord said to Moses, “Why are you crying out to me? Tell the Israelites to move on. 16 Raise your staff and stretch out your hand over the sea to divide the water so that the Israelites can go through the sea on dry ground. 17 I will harden the hearts of the Egyptians so that they will go in after them. And I will gain glory through Pharaoh and all his army, through his chariots and his horsemen. 18 The Egyptians will know that I am the Lord when I gain glory through Pharaoh, his chariots and his horsemen.”

LIGHTING NOTES:
The main source of light in this scene is the yellow/white radiating light rays, coming from above, which I have used to visually represent God speaking to Moses. There is no indication in the scriptures that God illuminated His words to mankind with any sort of glow or heavenly light… that is simply my way of showing that God is speaking, in this cartoon!

CHARACTERS PRESENT:
Moses, in blue gown holding up his hands, with his wooden shepherd’s staff lying on the ground behind him.

RESEARCH/ADDITIONAL NOTES:
The spiky plant in the foreground is Centaurea calcitrapa (Red Starthistle or Purple starthistle), which was also present in Scene 05 – Pursued.

I have included a Kleinmann’s (also called Egyptian, or Leith’s Tortoise) wehose Latin name is Testudo kleinmanni (or Testudo werneri)


Bible Doctrine Notes
14:15-16 DISCIPLESHIP, God’s Leadership (4.33A)
God’s will is not always what His people expect or anticipate. Rather than destroying the Egyptians and giving their land to the Hebrew people, God provided an escape by leading His people out of Egypt and into the wilderness. God provides a way for His disciples to do His will when we are obedient. When God closes one door, He opens another. In this case He opened a passageway through the sea.