Bible Cartoon: Exodus 08 - The Ten plagues of Egypt - The plague of gnats 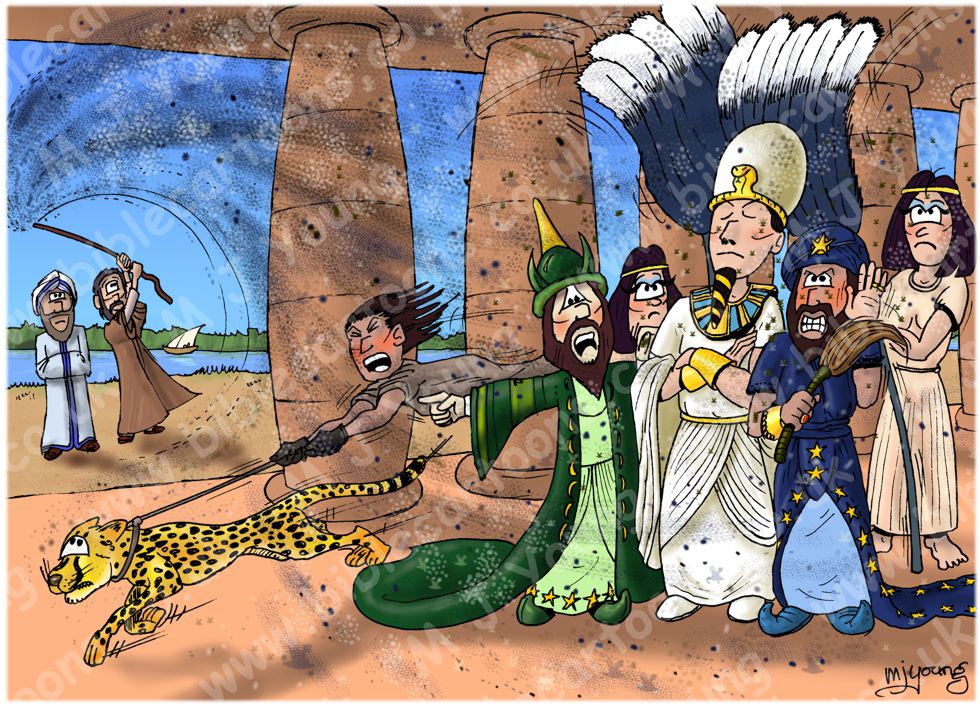 Exodus 8:16-19 (ANIV)
16 Then the Lord said to Moses, “Tell Aaron, ‘Stretch out your staff and strike the dust of the ground,’ and throughout the land of Egypt the dust will become gnats.”
17 They did this, and when Aaron stretched out his hand with the staff and struck the dust of the ground, gnats came upon men and animals. All the dust throughout the land of Egypt became gnats. 18 But when the magicians tried to produce gnats by their secret arts, they could not. And the gnats were on men and animals.
19 The magicians said to Pharaoh, “This is the finger of God.” But Pharaoh’s heart was hard and he would not listen, just as the Lord had said.

TIME OF DAY:
Indeterminate from the scriptures. I have set the cartoon at mid morning.

LIGHTING NOTES:
The sun is lighting the scene from left to right, casting the shadows.

CHARACTERS PRESENT:
Moses & Aaron, outside. Pharaoh (in white) with two magicians beside him (in green & blue) with two slave girls trying to keep the gnats off Pharaoh with ostrich feather fans! There is a man being pulled along by oe of Pharaoh’s Cheetahs too!

RESEARCH/ADDITIONAL NOTES:
This scene is based on the characters & costume established in the first plague picture, the plague of blood. We get a much better view of Pharaoh & his various attendants in this scene.

I based the costumes very loosely on photo reference found on the internet.

The gnats were the last element to add to the scene.


Bible Doctrine Notes
8:19 MIRACLE, Revelation (2.22C)
Up ‘til now the Egyptian magicians had matched the miracles performed by Moses. But at this time in the narrative they admitted defeat. They could not duplicate God’s miraculous works and they senses the hand of God at work in their midst. Pharaoh, however, refused to bow to God’s power. Each of the remaining plagues pointed to the power of God over creation. Moses, the man of faith, sought to provoke Pharaoh’s obedience to God, but each time Pharaoh hardened his heart. Miracles are only agents of revelation to those who believe in them, and God.