Bible Cartoon: Exodus 08 - The Ten plagues of Egypt - The plague of frogs 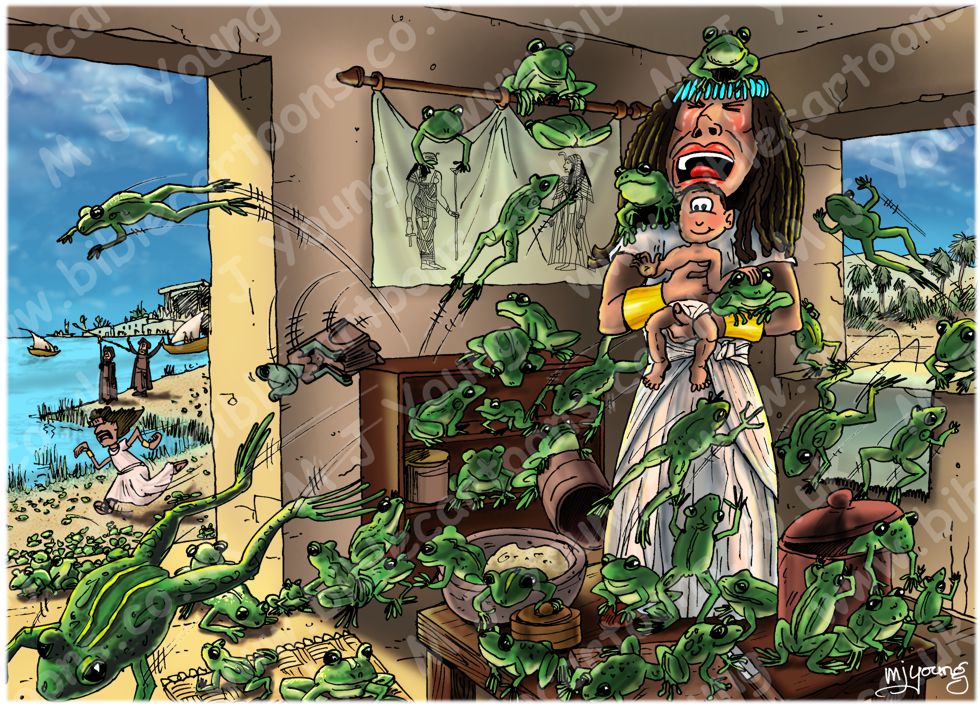 Exodus 8:1-7 (ANIV)
1 Then the Lord said to Moses, “Go to Pharaoh and say to him, ‘This is what the Lord says: Let my people go, so that they may worship me. 2 If you refuse to let them go, I will plague your whole country with frogs. 3 The Nile will teem with frogs. They will come up into your palace and your bedroom and onto your bed, into the houses of your officials and on your people, and into your ovens and kneading troughs. 4 The frogs will go up on you and your people and all your officials.’ “
5 Then the Lord said to Moses, “Tell Aaron, ‘Stretch out your hand with your staff over the streams and canals and ponds, and make frogs come up on the land of Egypt.’ “
6 So Aaron stretched out his hand over the waters of Egypt, and the frogs came up and covered the land. 7 But the magicians did the same things by their secret arts; they also made frogs come up on the land of Egypt.

TIME OF DAY:
Indeterminate from the scriptures. I have set the cartoon in the late morning (sun rises from the left.)

CHARACTERS PRESENT:
Egyptian woman holding her baby.
Moses & Aaron, his brother (holding staff in the air) standing by the Nile river bank, seen through the doorway.
An Egyptian running through the frogs coming up out of the Nile.
Lots of frogs & toads!

RESEARCH/ADDITIONAL NOTES:
The ten plagues occurred in Egypt, whilst the Hebrew people were held in captivity as slave workers of Pharaoh.

I like the fact tha the woman is screaming, but her baby is happily stroking on of the frogs! It is a sobering thought that the baby, if this woman’s first born son, would be dead in a few days time, as a result of the tenth plague.

What species of frog?
According to Mr. Michael J. Nicoll, assistant director of the Zoological Gardens at Gizah, near Cairo, the commonest Egyptian species are Rana mascariensis and Bufo regularis. Rana esculenta, Bufo viridis and Bufo vittatus are also found, but are much less common.

The Egyptian goddess Heqt was always pictured with the head of a frog. Frogs were considered sacred by the Egyptians & could not be killed. Egyptians worshipped the frog as a female goddess because frogs were common around the Nile, because they reproduced rapidly, and because being amphibians they are part of two worlds, creatures of both land and water. Perhaps the One true God decided to use a plague of frogs to show the Egyptians the foolishness of worshipping a frog-god! You can see this depicted graphically in the cartoon, as a frog-headed idol is toppling off the Egyptian woman’s wooden cabinet. Here we see the God of the Hebrew people literally toppling the frog-goddess Heqt… using a Nile frog to do it!


Bible Doctrine Notes
8:1-2 REVELATION, Events (3.21A)
The God of Israel send Moses, His messenger, to Pharaoh (king of Egypt) knowing his heart would be cold towards releasing the Hebrew people. God used many forces in His creation to persuade Pharaoh to let the people go. The 10 plagues are some of the strongest evidence of God’s concern and commitment to His people. These plagues show that revelation may occur through any part of God’s created order and that destructive events may bring revelation. Moses acted as God’s spokesperson; the One whose name and nature had been revealed to Moses at the mountain (see Exodus chp 3-4). Events need to be interpreted by God’s chosen representative before other people understand them as revelation.