Bible Cartoon: Exodus 07 - The Ten plagues of Egypt - The plague of blood 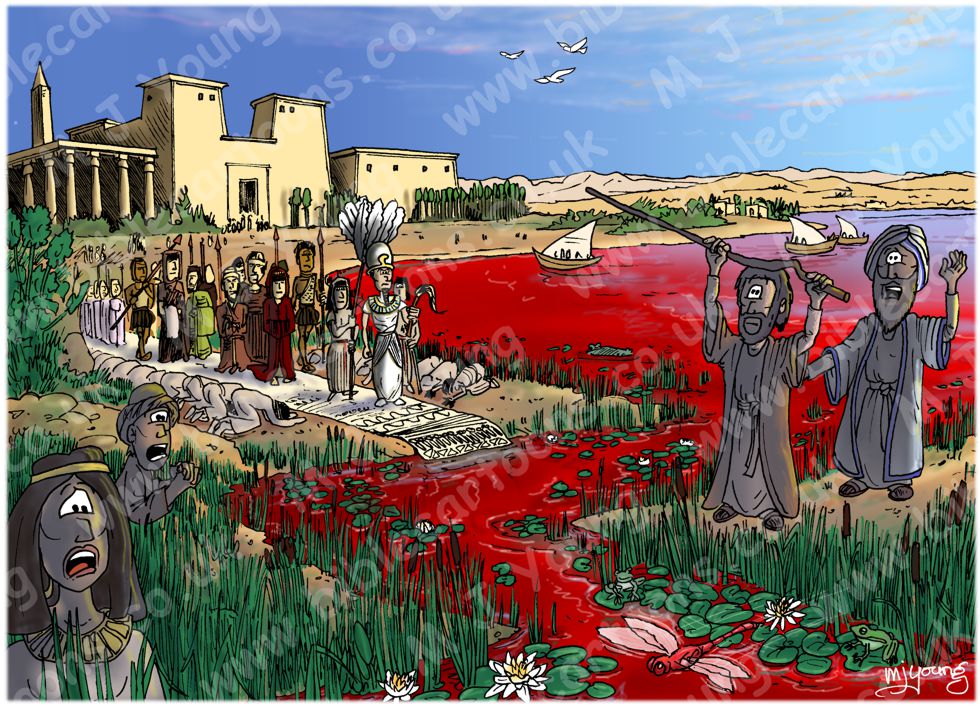 Exodus 7:14-25 (ANIV)
14 Then the Lord said to Moses, “Pharaoh’s heart is unyielding; he refuses to let the people go. 15 Go to Pharaoh in the morning as he goes out to the water. Wait on the bank of the Nile to meet him, and take in your hand the staff that was changed into a snake. 16 Then say to him, ‘The Lord, the God of the Hebrews, has sent me to say to you: Let my people go, so that they may worship me in the desert. But until now you have not listened. 17 This is what the Lord says: By this you will know that I am the Lord: With the staff that is in my hand I will strike the water of the Nile, and it will be changed into blood. 18 The fish in the Nile will die, and the river will stink; the Egyptians will not be able to drink its water.’ “
19 The Lord said to Moses, “Tell Aaron, ‘Take your staff and stretch out your hand over the waters of Egypt—over the streams and canals, over the ponds and all the reservoirs‘—and they will turn to blood. Blood will be everywhere in Egypt, even in the wooden buckets and stone jars.”
20 Moses and Aaron did just as the Lord had commanded. He raised his staff in the presence of Pharaoh and his officials and struck the water of the Nile, and all the water was changed into blood. 21 The fish in the Nile died, and the river smelled so bad that the Egyptians could not drink its water. Blood was everywhere in Egypt. 22 But the Egyptian magicians did the same things by their secret arts, and Pharaoh’s heart became hard; he would not listen to Moses and Aaron, just as the Lord had said. 23 Instead, he turned and went into his palace, and did not take even this to heart. 24 And all the Egyptians dug along the Nile to get drinking water, because they could not drink the water of the river.

25 Seven days passed after the Lord struck the Nile.

TIME OF DAY:
We know the scene is morning because verse 15 reads, ‘Go to Pharaoh in the morning as he goes out to the water,’ I have set the scene early, just as the sun is rising.

LIGHTING NOTES:
The early morning sunlight, just peeping over the horizon is lighting the scene. Strong shadows cover Moses & Aaron (on the right of the cartoon) as they have their backs to the rising sun.

CHARACTERS PRESENT:
Moses & Aaron, in the foreground, on the right of the cartoon. An Egyptian woman & man, in the foreground, on the left of the cartoon. You can just make out Pharoah & his officials, walking towards Moses, across the river. Pharoah is dressed in white, with a large dome-like headdress on, flanked by two women slaves who are waving ostrich feathers on poles behind him. Various officials (& magicians) are behind Pharoah.

Notice the Nile Crocodile gradually swimming closer to the shore. There is a dragonfly as well. Also note the 2 green frogs sitting on lily pads… portents of the next plague!

RESEARCH/ADDITIONAL NOTES:
The exact setting is not specified in the text. I have set the scene on an imaginary Nile river bank. Yo can see Pharoah’s splendid palace in the background, which is based on photographs of the Great Hall of the Temple of Horus in the city Thebes, Egypt.

The Nile crocodile (Crocodylus niloticus) is the largest crocodilian in Africa and is sometimes regarded as the second largest crocodilian after the Saltwater crocodile. The male crocodile usually measure from 11.5 to 16 feet long (3.5 to 5 meters), but very old, mature ones can grow to 18 ft (5.5 m) or more. Males usually weigh about 500 lbs (225 kg), but very large & old specimens can reach up to 2000 lbs (909 kg). – http://en.wikipedia.org/wiki/Nile_crocodile

Plants
There are several examples of the Tiger Lotus (also called White lotus or Egyptian White Water-lily (Nymphaea lotus)) in the foreground.

The main vegetation in the scene is Bulrush (also called Common Bulrush, Broadleaf Cattail, Common Cattail, or Cat-o’-nine-tails. It’s scientific name is Typha latifolia, which grows 5 to 10 feet (1.5 to 3 metres) high. The plant will generally grow up to about 2 to 3 feet (0.75 to 1 metre) of water depth. The other plant type is Papyrus sedge (also called Paper reed) whose scientific name is Cyperus papyrus. As wikiopedia notes: “Papyrus sedge (and its close relatives) has a very long history of use by humans, notably by the Ancient Egyptians—it is the source of papyrus paper, parts of it can be eaten, and the highly buoyant stems can be made into boats. This tall, robust, leafless aquatic plant can grow 13 to 16 ft (4 to 5 m) high. It forms a grass-like clump of triangular green stems that rise up from thick, woody rhizomes. Each stem is topped by a dense cluster of thin, bright green, thread-like stems around 4 to 10 in (10 to 30 cm) in length, resembling a feather duster when the plant is young.”
[Source: http://en.wikipedia.org/wiki/Cyperus_papyrus]