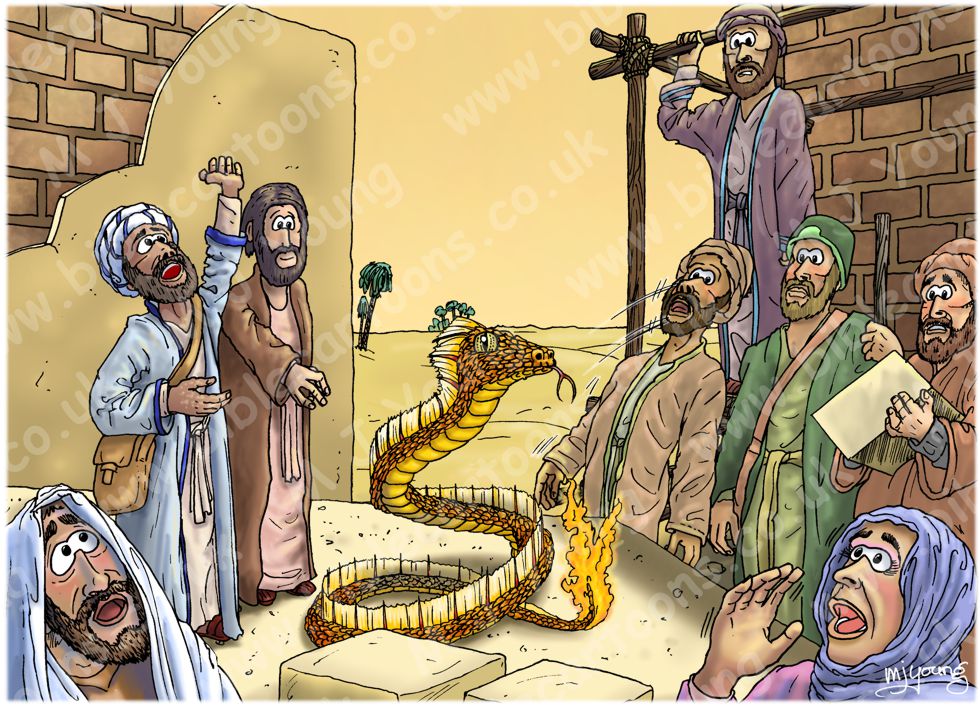 Exodus 4:27-31 (ANIV)
27 The Lord said to Aaron, “Go into the desert to meet Moses.” So he met Moses at the mountain of God and kissed him. 28 Then Moses told Aaron everything the Lord had sent him to say, and also about all the miraculous signs he had commanded him to perform.
29 Moses and Aaron brought together all the elders of the Israelites, 30 and Aaron told them everything the Lord had said to Moses. He also performed the signs before the people, 31 and they believed. And when they heard that the Lord was concerned about them and had seen their misery, they bowed down and worshipped.

TIME OF DAY:
Unspecified in the Bible narrative. I have set this scene in the late morning.

LIGHTING NOTES:
The fierce, hot Egyptian sun is beating down on the characters in this scene from above and to the right, casting shadows to the left of figures and objects.

CHARACTERS PRESENT:
Moses (in blue robe) and Aaron (in brown robes) are standing on a large block of stone. Moses staff has just turned into a snake. The other figures present represent the leaders of the Hebrew people in Egypt.

RESEARCH/ADDITIONAL NOTES:
This scene shows Moses and Aaron atop a large piece of stone, addressing the leaders of the Hebrew people in Egypt. Aaron has just thrown down Moses’ staff, and it has transformed into a snake. Note that I have drawn the snake as it appeared in a previous scene (Exodus 04 – Burning Bush – Scene 05 – Snake staff). The figures near it are naturally fearful of this sign! I have also drawn Moses with one hand raised to heaven, and the other showing leprosy, which was one of the signs the Lord told him to demonstrate to the leaders, so that they would believe the Lord had really sent Moses to them.


Bible Doctrine Notes
4:31 PRAYER, Corporate (5.57C)
Prayer belongs to community worship as much as it does to individual piety. Prayer and humble worship are proper responses to God’s merciful actions.