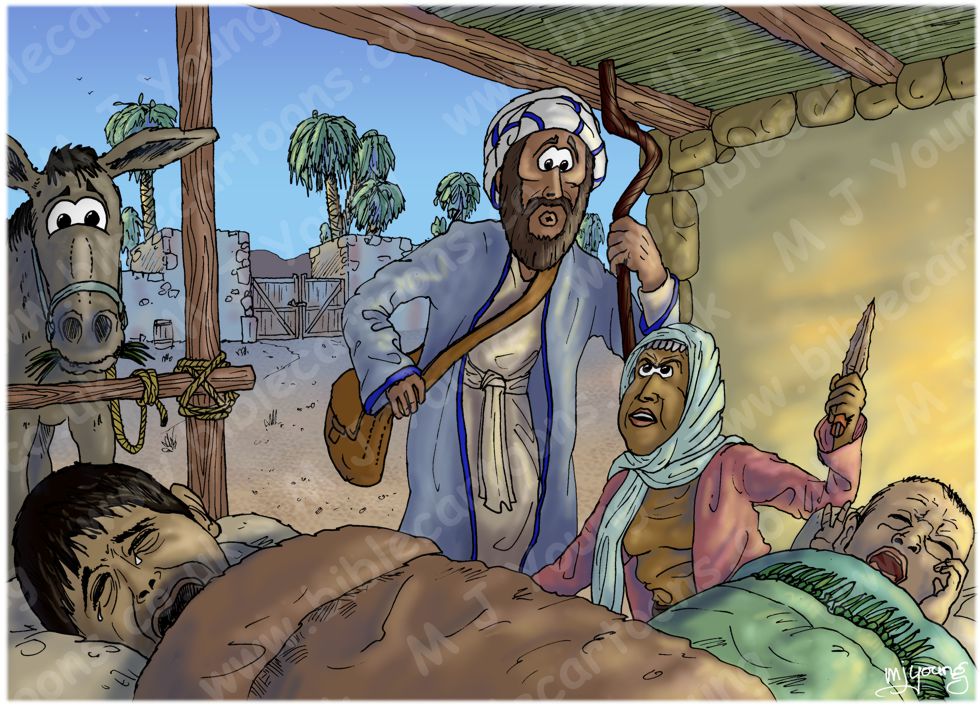 Exodus 4:24-26 (ANIV)
24 At a lodging place on the way, the Lord met Moses [1] and was about to kill him. 25 But Zipporah took a flint knife, cut off her son’s foreskin and touched Moses’ feet with it.2 “Surely you are a bridegroom of blood to me,” she said. So the Lord let him alone. (At that time she said “bridegroom of blood”, referring to circumcision.)

LIGHTING NOTES:
The setting sun provides some late, feeble highlight to the palm trees in the background.
A fire or lamp provides the strongest, yellow light, in the foreground (although we can’t see it in this scene).

CHARACTERS PRESENT:
Moses is standing in the entrance to the lodging place, with his wife Zipporah kneeling before his feet. The couples two sons (Gershom and Eliezer) are crying in bed.
Moses’ donkey.

RESEARCH/ADDITIONAL NOTES:
This was quite a difficult scene to draw. The question of how to draw circumcision (cut off Moses and Zipporah’s son’s foreskin) in a tasteful, acceptable way was uppermost in my mind as I approached this scene! I decided to imply the action rather than to graphically show it. I achieved this by having the 2 children crying in their beds, with Zipporah kneeling, with one of her hands holds the flint knife mentioned in verse 25, & the other is unseen, near Moses’ feet.

In the background we can see the courtyard of the inn or lodging place, with gates shut and barred, to keep everyone in the lodge safe during the night.
Behind Gershom (the eldest child, on the left) is the donkey seen in the previous picture, looking sympathetically at the children!

There has been much written about this incident by much more learned scholars than me! Here’s what J. Vernon McGee’s Thru the Bible commentary has to say…

“This incident is difficult to understand, and we must retrace our steps somewhat to examine the problem. When Moses fled as a fugitive from Egypt, he went to the land of Midian. The Midianites were the offspring of Abraham and Keturah. These people were monotheistic. They were not idolaters but worshiped one God. Moses felt at home with these people. He became close friends with the priest of Midian who had seven daughters. Moses married his daughter Zipporah — a name that sounds like a modern gadget to take the place of buttons. Actually, as we have said before, her name means “sparrow” or “little bird.” The wife of Moses was the first “Lady Bird.”

God blessed Moses’ home in the beginning. His first son Gershom, meaning “stranger”, was born in Midian. Moses had been a stranger in his land, but he had made it his home.

In Moses’ married life, unfortunately, there was a problem. God called Moses at the burning bush and commissioned him to go to Egypt. Pharaoh was dead and it was safe for Moses to return. As Moses started his journey to Egypt, God attempted to kill him. Why? Moses had neglected the rite of circumcising his son. Circumcision was the badge and seal of God’s covenant with Abraham that was designed to teach the Israelites to have no confidence in the flesh. The flesh was to be cut away, and each Israelite was to place his trust in God.

Genesis 15:6, Psalm 106:31, Romans 4:3, and Galatians 3:6 tell us that Abraham believed God and it was counted unto him as righteousness. Isaac and Jacob followed the example of Abraham. They were Israelites by birth, but circumcision was the badge of it. It was an act of faith for them to perform that rite. Circumcision was the evidence that a man was the son of Abraham. It was an evidence of their faith.

Apparently Zipporah had resisted the ordinance of circumcision, and Moses had not insisted upon it. Perhaps Moses did not feel this act was so important, and obviously his wife felt it was a foolish and bloody thing to do. At any rate, Moses did not want to precipitate a marital rift. Moses’ wife was not atheistic; she was monotheistic. She was simply resisting the ordinance of God, and Moses did not want to make an issue of it. Moses could stand up against Pharaoh, but he could not stand up against his wife. Moses could tell Israel when they were wrong, but he did not oppose his wife when she was wrong.

Moses obviously thought he could get away with this area of disobedience. He just let it slide like many Christian workers do who neglect their own families while trying to fix up other people’s families. God intervened in Moses’ life. He waylaid him on the way to Egypt and revealed to him the seriousness of the situation. There is a real danger when husband and wife do not agree completely in spiritual matters. That is the reason Scripture warns against believers and non-believers getting married.

It was Zipporah who performed the rite of circumcision upon their son to save the life of Moses. Therefore what she did was an act of faith on her part. She claimed the promise of the covenant with Abraham — the redemption of blood with no confidence in the flesh. After the circumcision of their son, perhaps when they reached Egypt, Moses saw the problem, and sent her back home to be with her father. Later on the wilderness march we shall see that Jethro, Moses’ father-in-law, brought Zipporah to him and they were reconciled.”