Bible Cartoon: Exodus 08 - The Ten plagues of Egypt - The plague of flies 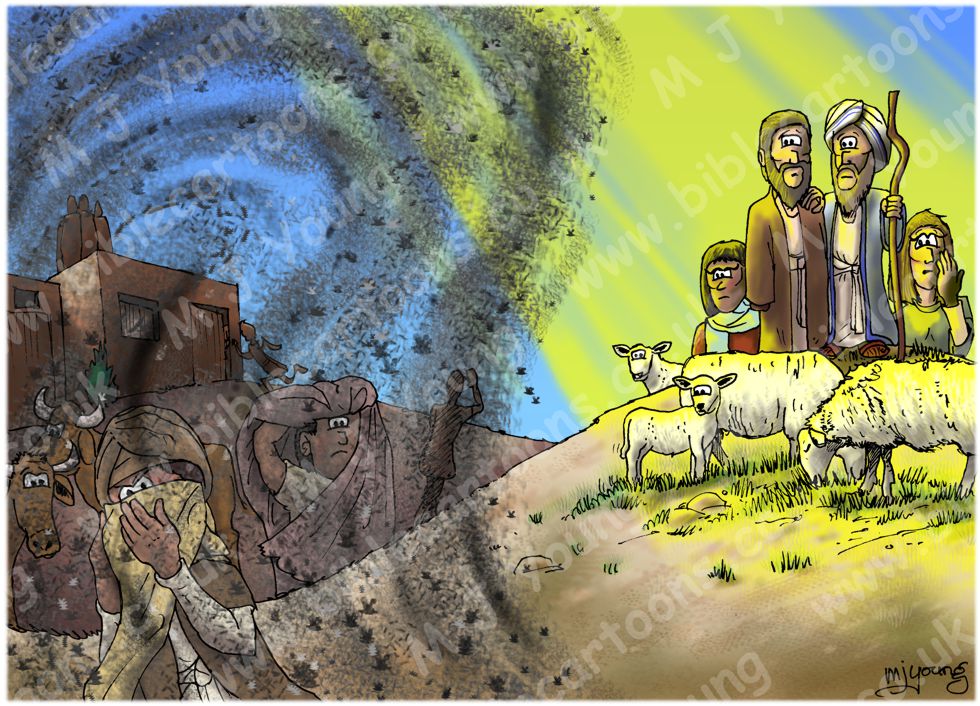 Exodus 8:20-32 (ANIV)
20 Then the Lord said to Moses, “Get up early in the morning and confront Pharaoh as he goes to the water and say to him, ‘This is what the Lord says: Let my people go, so that they may worship me. 21 If you do not let my people go, I will send swarms of flies on you and your officials, on your people and into your houses. The houses of the Egyptians will be full of flies, and even the ground where they are.
22 “ ‘But on that day I will deal differently with the land of Goshen, where my people live; no swarms of flies will be there, so that you will know that I, the Lord, am in this land. 23 I will make a distinction [1] between my people and your people. This miraculous sign will occur tomorrow.’ “
24 And the Lord did this. Dense swarms of flies poured into Pharaoh’s palace and into the houses of his officials, and throughout Egypt the land was ruined by the flies. 25 Then Pharaoh summoned Moses and Aaron and said, “Go, sacrifice to your God here in the land.”
26 But Moses said, “That would not be right. The sacrifices we offer the Lord our God would be detestable to the Egyptians. And if we offer sacrifices that are detestable in their eyes, will they not stone us? 27 We must take a three-day journey into the desert to offer sacrifices to the Lord our God, as he commands us.”
28 Pharaoh said, “I will let you go to offer sacrifices to the Lord your God in the desert, but you must not go very far. Now pray for me.”
29 Moses answered, “As soon as I leave you, I will pray to the Lord, and tomorrow the flies will leave Pharaoh and his officials and his people. Only be sure that Pharaoh does not act deceitfully again by not letting the people go to offer sacrifices to the Lord.” 30 Then Moses left Pharaoh and prayed to the Lord, 31 and the Lord did what Moses asked: The flies left Pharaoh and his officials and his people; not a fly remained. 32 But this time also Pharaoh hardened his heart and would not let the people go.

LIGHTING NOTES:
The sun lights this scene from the left.

CHARACTERS PRESENT:
On the hill to the right: Moses (holding staff) Aaron & two Hebrew women & some sheep.
Two Egyptian men & two cows in the foreground, with 2 figures running towards a house. There is someone at the door inside the house, but you can’t really see because of the swarm of flies! There is a group of figures on the roof of the house as well.

RESEARCH/ADDITIONAL NOTES:
This scene is entirely out of my imagination. I am pleased with the swirling swarm of flies.

Notice that the scene is split into 2 halves. The left hand side is plagued with flies, just as God promised, but the right hand side is free of them, & represents the land of Goshen. This is the first plague in which God started to treat his people the Hebrews differently from the Egyptians. In verse 22-23 God said, “I will deal differently with the land of Goshen, where my people [the Hebrews] live; no swarms of flies will be there, so that you will know that I, the Lord, am in this land. I will make a distinction between my people and your people [the Egyptians.] “

Where is Goshen?
Goshen was a district in Egypt where Jacob and his family settled, and in which the Hebrew people remained untill the Exodus. It is also called “the land of Rameses” (Gen 47:11; Ex 12:37), for the towns Pithom and Rameses lay within its borders. Anoher name for this region was Zoan or Tanis (Ps 78:12).
Goshen lay on the east of the Nile, apparently not far from the royal residence. It was described in Genesis 47:6 & 11 as “the best of the land”, but now it is a desert.


Bible Doctrine Notes
8:22-23 ELECTION, Other Nations (4.13B)
God used the elements and nature to bring judgement and punishment upon Pharaoh and those who disobeyed God, to reveal His election power and purpose to foreign people in a foreign land. The heart of election is the distinction between God’s people and other people. Sin and unbelief lead to the doctrine of election, where God selects, delivers and trains a people to be His own in the midst of an unbelieving world.

8:30-31 PRAYER, Will of God (5.52B)
Prayer is God means of executing His will on earth. The 10 plagues came at the initiative of God, whilst their cessation came as an answer to Moses’ prayers.