Bible Cartoon: Exodus 09 - The Ten plagues of Egypt - The plague on livestock 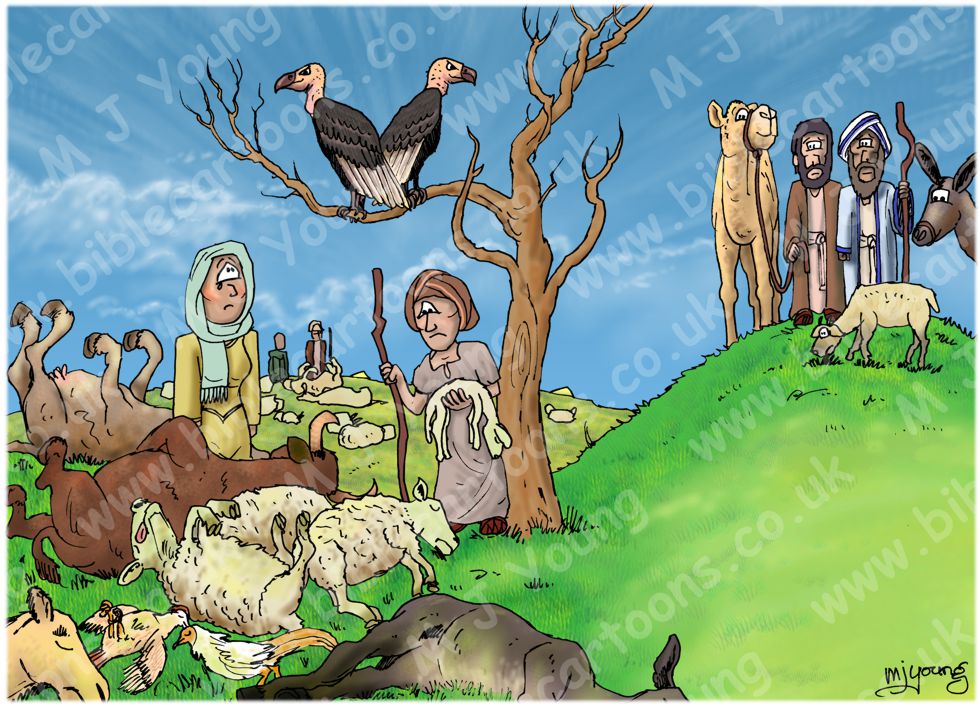 Exodus 9:1-7 (ANIV)
1 Then the Lord said to Moses, “Go to Pharaoh and say to him, ‘This is what the Lord, the God of the Hebrews, says: “Let my people go, so that they may worship me.” 2 If you refuse to let them go and continue to hold them back, 3 the hand of the Lord will bring a terrible plague on your livestock in the field—on your horses and donkeys and camels and on your cattle and sheep and goats. 4 But the Lord will make a distinction between the livestock of Israel and that of Egypt, so that no animal belonging to the Israelites will die.’ “
5 The Lord set a time and said, “Tomorrow the Lord will do this in the land.”
6 And the next day the Lord did it: All the livestock of the Egyptians died, but not one animal belonging to the Israelites died. 7 Pharaoh sent men to investigate and found that not even one of the animals of the Israelites had died. Yet his heart was unyielding and he would not let the people go.

TIME OF DAY:
Not specified in the scriptures.

LIGHTING NOTES:
The scene is lit by diffused light from the sun, from above.

CHARACTERS PRESENT:
Moses (in blue robe) & Aaron (in brown robe) on the right hand hill. They have some livestock (camel, goat, donkey) with them, which is unaffected by the plague.
Several Egyptians: in the foreground we see a woman looking up at the vultures on he tree, and a man holding a dead lamb in his hand. There are 2 Egyptian figures on the distant horizon, surrounded by more dead animals.
The foreground is dominated by dead animals: a camel on the far left (you can only see its head), next to two chickens, three sheep & a donkey. Behind them are 2 cows.


Bible Doctrine Notes
9:4-7,26 ELECTION, Mercy (4.12H)
The Hebrew people lived in the land of Goshen, north eastern Egypt. God mercifully preserved His chosen, elect people from the destructive hail, which punished unbelieving Pharaoh and his people. Whilst all sinful people rightly deserve death, the doctrine of election is built on God’s merciful desire to save people from it.