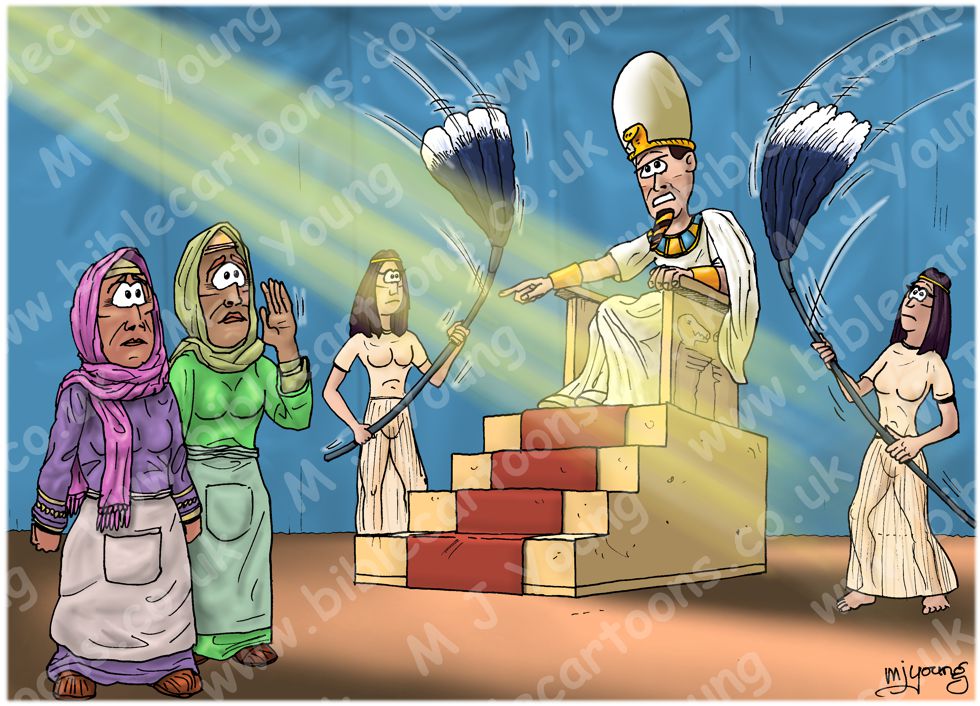 Exodus 1:14-21 (ANIV)
The king of Egypt [Pharaoh] said to the Hebrew midwives, whose names were Shiphrah and Puah, “When you help the Hebrew women in childbirth and observe them on the delivery stool, if it is a boy, kill him; but if it is a girl, let her live.” The midwives, however, feared God and did not do what the king of Egypt had told them to do; they let the boys live. Then the king of Egypt summoned the midwives and asked them, “Why have you done this? Why have you let the boys live?”
The midwives answered Pharaoh, “Hebrew women are not like Egyptian women; they are vigorous and give birth before the midwives arrive.”
So God was kind to the midwives and the people increased and became even more numerous. And because the midwives feared God, he gave them families of their own.

LIGHTING NOTES:
Light from the sun is pouring in through high windows

CHARACTERS PRESENT:
Shiphrah and Puah the Hebrew midwives being spoken to by Pharaoh (the king of Egypt).
There are two slave girls wafting Ostrich feather fans to keep Pharaoh cool.

This is the 4th scene in this series about the Hebrew oppression that preceded the Exodus out of Egypt. In this picture we can see Pharaoh, sitting on his throne, talking to the two Hebrew midwives (called Shiphrah and Puah). He commands them to allow the new born Hebrew boys to die at birth.

The colouring for the figures comes from Exodus 08 – the ten plagues of Egypt – Plague of gnats, which I completed in Dec 2010. I like to take care to use similar colouring, even in scenes that are years apart in design, which aids consistency, even across the years between drawings!


Bible Doctrine Notes
1:20-21 GOD, Grace (1.14C)
God blesses those who respond to Him and do His will. Because the Hebrew midwives feared God and followed the inner promptings of God to spare the Hebrew male babies, God blessed them with families of their own. Although God reaches out to bless obedient, faithful people, we should not think of Him as an automatic blessing machine, who can be manipulated by our wishes. Nor should we conclude that our good works buy God’s favour. God does bless those who respond to Him in faithful action.