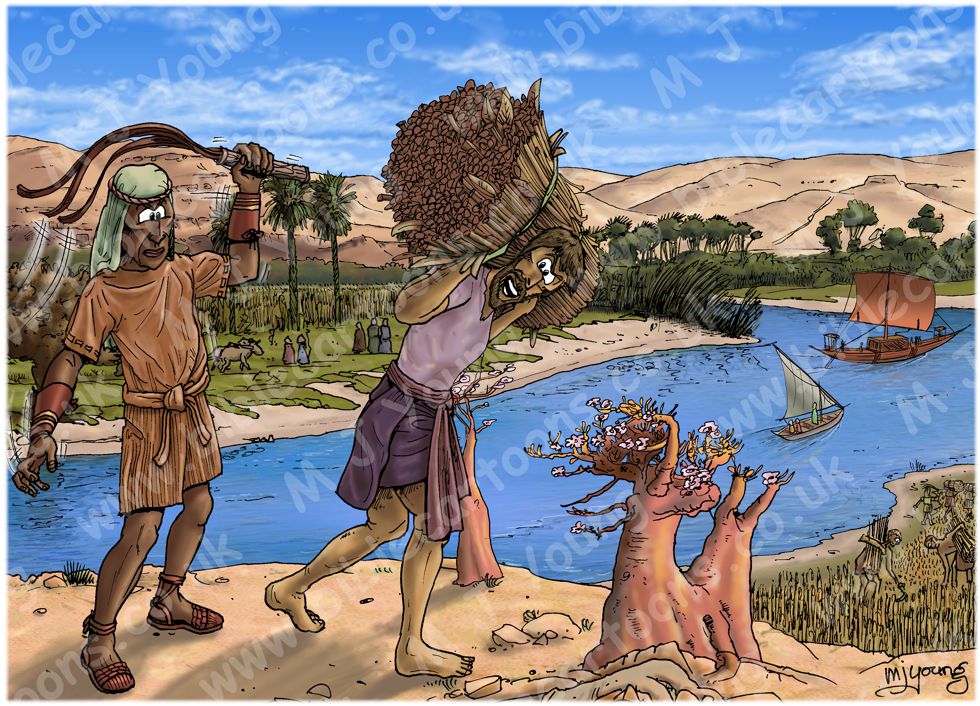 Exodus 1:11-14 (ANIV)
11 So they [the Egyptian people] put slave masters over them [the Hebrew people] to oppress them with forced labour, and they built Pithom and Rameses as store cities for Pharaoh. 12 But the more they were oppressed, the more they multiplied and spread; so the Egyptians came to dread the Israelites and 13 worked them ruthlessly. 14 They made their lives bitter with hard labour in brick and mortar and with all kinds of work in the fields; in all their hard labour the Egyptians used them ruthlessly.

LIGHTING NOTES:
The afternoon sun is on the right, casting shadows to the left.

02) (This page) Exodus 01 – Hebrews Oppressed – Scene 03 – Hard labour (Version 02). This is the newer, more modest version (specifically requested by a customer) which covers up the bare chested Hebrew man in the scene.

In the foreground, an Egyptian slave master (with leather whip in hand) is driving a Hebrew labourer (carrying a large bundle of straw reeds on his shoulders).
To the right you can see some Hebrew labourers harvesting barley, with another Egyptian slaver master behind them, who is directing two more Hebrew men with bundles of straw on their shoulders.
There is a large Egyptian sailing boat (perhaps a royal one?) on the river Nile, with a smaller boat closer to the shore.
Behind the far river bank you can make out people working the fields, including a person with a pair of oxen.

RESEARCH/ADDITIONAL NOTES:
This scene takes place on the banks of the river Nile, the most important river in Egypt. I have included 2 water craft, a large brown wooden sailing boat with a smaller fishing boat in front of it. These are included to illustrate the importance of the Nile river to the Egyptians. [1]

The crop the slaves are harvesting is barley (Hordeum vulgare L.) [2]

I used some photographic reference for the Nile river, plants & sand dunes in the background. 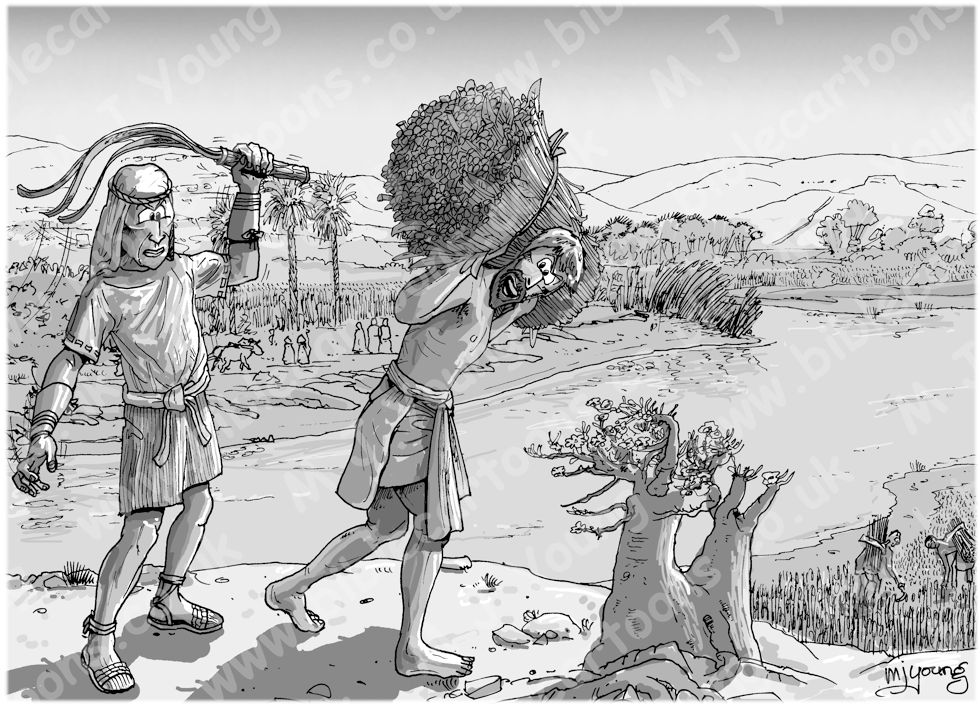 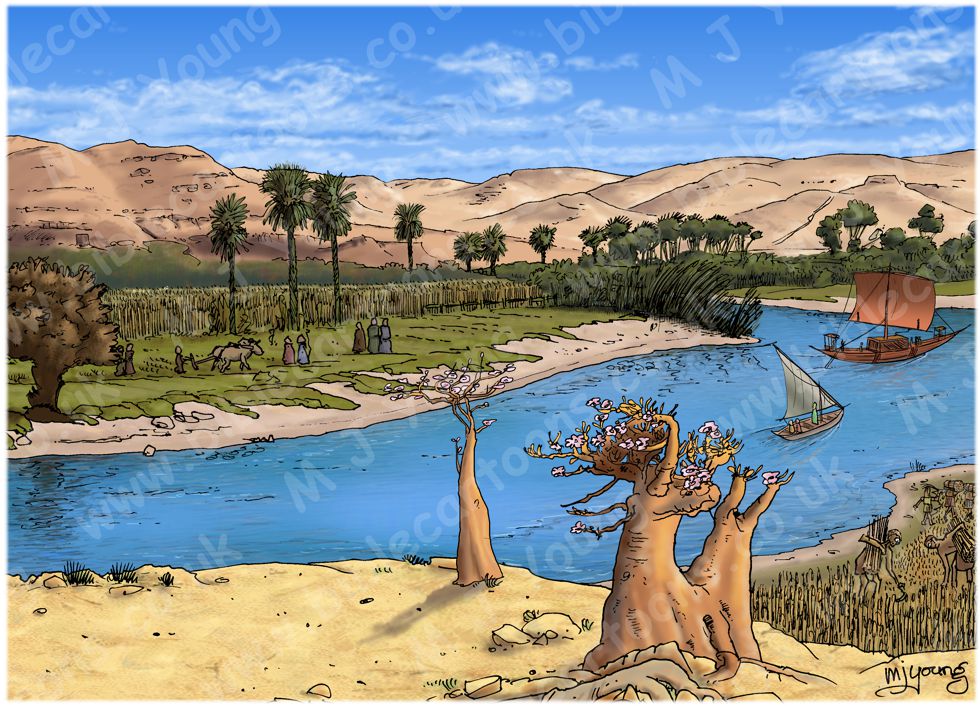 [1]
Ships and watercraft in ancient Egypt were an important factor in the development of maritime trade and transport throughout the span of the civilization. Egyptian shipbuilders advanced from the most basic rafts to learning how to navigate the open sea, using their skills to gather food, conduct trade along the Mediterranean and Red Sea coasts, and engage in warfare. Ships also served as symbolic representations of power that are frequently depicted in ancient Egyptian art.

Ships are represented in ancient Egyptian paintings dated as early as 4000 B.C., but the artistic depictions do not reveal clear information on their details or construction. These early canoe-like boats or rafts made of papyrus were used for fishing and transportation, and influenced later wooden designs for timber construction. Timbers discovered at the Tarkhan site and dated to 3000 B.C. are believed to be the earliest known ship fragments, reused as roofing for the Tarkhan tombs.
(Source: http://classroom.synonym.com/ships-ancient-egypt-13098.html)

There is a good article about Egyptian watercraft here: http://www.reshafim.org.il/ad/egypt/timelines/topics/navigation.htm

[2]
Barley is a grass with a swollen grain that is similar to wheat that can be ground to produce a flour suitable for the production of bread. However unlike wheat, barley has always been particularly important in the production of beers and ales. Barley is the second most widely grown arable crop in the UK with around 1.1 million hectares under cultivation and today’s varieties trace their origins back over 10,000 years to the first farmers.

Barley has remained a successful cereal crop because of its short growing time and ability to survive in poor conditions.

Barley is striking because of the long spikes that emerge from the end of each grain. These are known as awns. Barley is also easily identifiable on breezy days in the early summer when “waves” blow through the crop.
(Source: http://www.ukagriculture.com/crops/barley_uk.cfm)

The Old English word for ‘barley’ was bære, which traces back to Proto-Indo-European and is cognate to the Latin word farina “flour”. The direct ancestor of modern English “barley” in Old English was the derived adjective bærlic, meaning “of barley”. The first citation of the form bærlic in the Oxford English Dictionary dates to around 966 AD, in the compound word bærlic-croft. The underived word bære survives in the north of Scotland as bere, and refers to a specific strain of six-row barley grown there. The word barn, which originally meant “barley-house”, is also rooted in these words.
(Source: http://en.wikipedia.org/wiki/Barley)

[3]
Adenium obesum
A species of flowering plant in the dogbane family, Apocynaceae, that is native to the Sahel regions, south of the Sahara (from Mauritania and Senegal to Sudan), and tropical and subtropical eastern and southern Africa and Arabia. Common names include Sabi star, kudu, mock azalea, impala lily and desert rose.

The toxic sap of its roots and stems is used as arrow poison for hunting large game throughout much of Africa and as a fish toxin.

It is an evergreen or drought-deciduous succulent shrub (which can also lose its leaves during cold spells, or according to the subspecies or cultivar). It can grow to 1–3 m (3.3–9.8 ft) height, with pachycaul stems and a stout, swollen basal caudex. The leaves are spirally arranged, clustered toward the tips of the shoots, simple entire, leathery in texture, 5–15 cm (2.0–5.9 in) long and 1–8 cm (0.39–3.1 in) broad. The flowers are tubular, 2–5 cm (0.79–2.0 in) long, with the outer portion 4–6 cm (1.6–2.4 in) diameter with five petals, resembling those of other related genera such as Plumeria and Nerium. The flowers tend to red and pink, often with a whitish blush outward of the throat.
(Source: http://en.wikipedia.org/wiki/Adenium_obesum)

Adenium obesum is actually a succulent member of the Oleander family. It originates in East Africa, from regions where it rains frequently in the summer, but is very dry in winter.
(Source: http://www.plantoftheweek.org/week001.shtml)