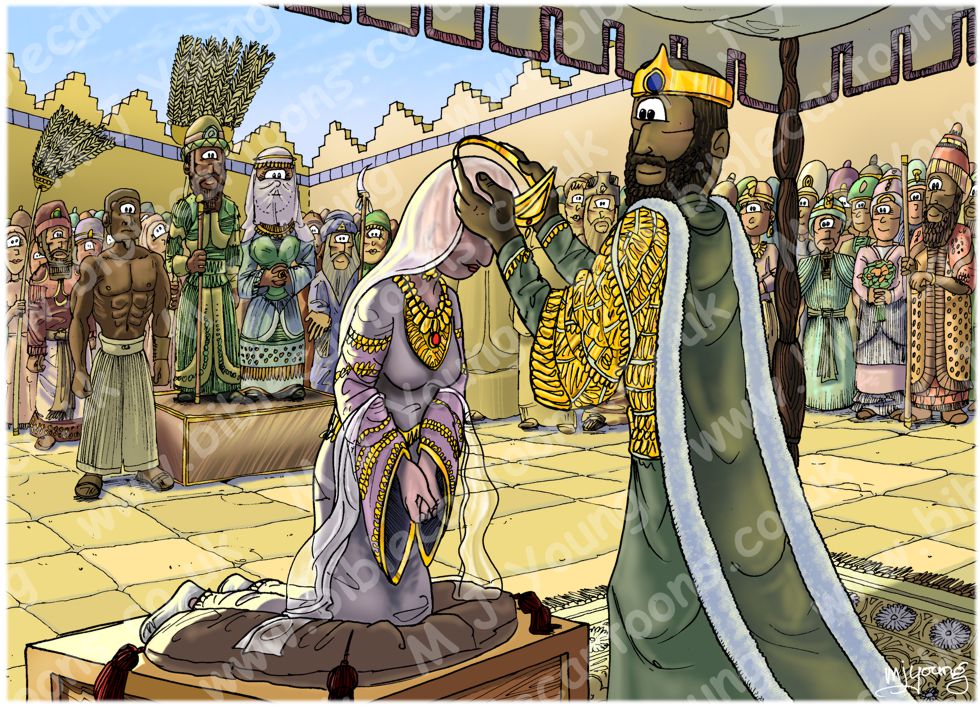 Esther 2:15-17 (ANIV)
15 When the turn came for Esther (the girl Mordecai had adopted, the daughter of his uncle Abihail) to go to the king, she asked for nothing other than what Hegai, the king’s eunuch who was in charge of the harem, suggested. And Esther won the favour of everyone who saw her. 16 She was taken to King Xerxes in the royal residence in the tenth month, the month of Tebeth, in the seventh year of his reign.
17 Now the king was attracted to Esther more than to any of the other women, and she won his favour and approval more than any of the other virgins. So he set a royal crown on her head and made her queen instead of Vashti.

CHARACTERS PRESENT:
King Xerxes placing crown on Esther’s head. Behind them are various nobles, dignitaries, ministers & courtiers of the palace.

RESEARCH/ADDITIONAL NOTES:
I really enjoyed colouring up this scene. Although the intricate detail & great number of people in the scene meant it took a long time to complete, nevertheless the final version was worth it. I am particularly happy with the strong sunlight which outlines the left of Esther’s figure. Her skin colouring was determined in a previous scene (Esther 00 – Esther in field.)

Who was Esther?
She was a Jewess named Hadas’sah (the myrtle), but when she entered the royal harem she received the name by which she henceforth became known (Esth 2:7). It is a Syro-Arabian modification of the Persian word satarah, which means a star. She was the daughter of Abihail, a Benjamite. Her family did not avail themselves of the permission granted by Cyrus to the exiles to return to Jerusalem; and she resided with her cousin Mordecai, who held some office in the household of the Persian king at “Shushan in the palace.”

Esther appears in the Bible as a “woman of deep piety, faith, courage, patriotism, and caution, combined with resolution; a dutiful daughter to her adopted father, docile and obedient to his counsels, and anxious to share the king’s favour with him for the good of the Jewish people. There must have been a singular grace and charm in her aspect and manners, since ‘she obtained favour in the sight of all them that looked upon her’ (Esth 2:15). That she was raised up as an instrument in the hand of God to avert the destruction of the Jewish people, and to afford them protection and forward their wealth and peace in their captivity, is also manifest from the Scripture account.”
(Source: Illustrated Bible Dictionary: And Treasury of Biblical History, Biography, Geography, Doctrine, and Literature.)

Who was Xerxes?
The name is an attempt to transliterate into Greek (Ξέρξης, Xérxēs) the Persian Khshayarsha. The same word in unpointed Hebrew took the form ʾḥshwrsh, probably pronounced ʾăḥshāwārash, but at a later time it was wrongly vocalized so as to produce ‏אֲהַשְׁוֵרוֹשׁ‎, ʾăḥashwērōsh, from whence “Ahasuerus” in English versions of the Bible comes. Xerxes was king of Persia in 485-465 BC.
(Source: The International Standard Bible Encyclopedia.)

Xerxes was the son of Darius I and grandson of Cyrus the Great.