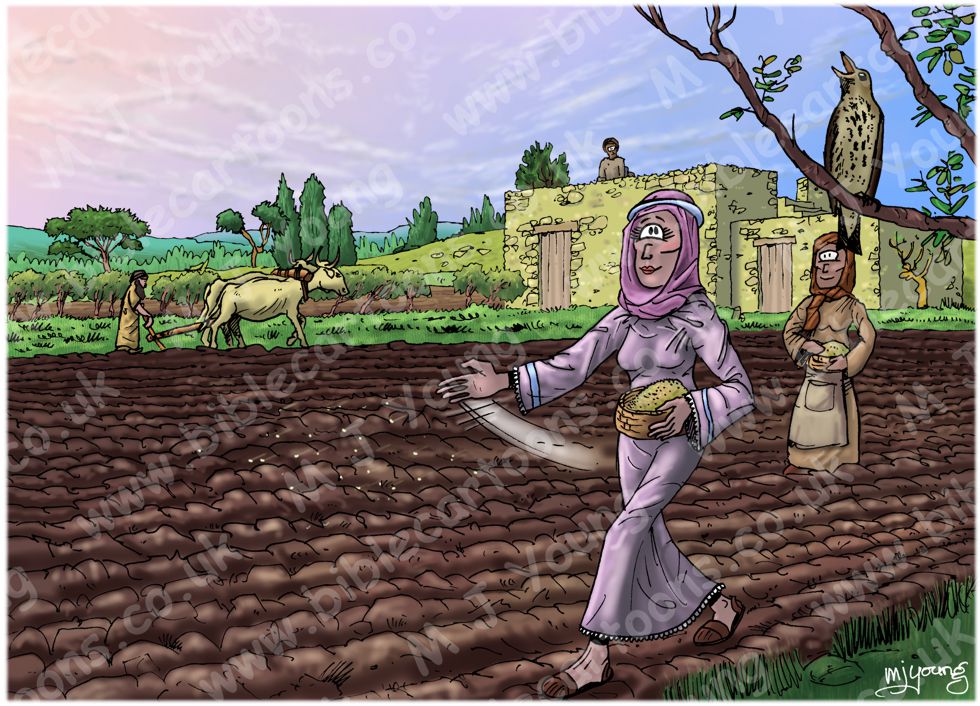 This scene is not found in the Book of Esther. It shows Esther before the Hebrew people were exiled to Babylonia by King Nebuchadnezzar.

LIGHTING NOTES:
The sun is low in the sky (on the left) & the pink, yellow rays of the early morning illuminates this scene.

CHARACTERS PRESENT:
Esther (in foreground) sowing seed on to a ploughed field. Another woman following on behind, also planting seed. A man with 2 oxen ploughing the field in the background. A woman on top of the farm house roof.

RESEARCH/ADDITIONAL NOTES:
This scene is not mentioned in the book of Esther, but was requested by an American Bible-based Summer Sports Camp (UW Sports Ministry.)

The bird singing on the tree branch is a Song Thrush (Turdus philomelos).

Perhaps it would be useful to outline the 119 years history from the first deportation of the Hebrew people (under King Nebuchadnezzar of Babylon) until the story of Esther, who lived in the Persian citadel of Susa. This gives us a framework & sense of the epic events surrounding Esther’s life (see below.)

How frightening it must have been to have been invaded by a conquering army, captured, & then forcefully relocated into another country & culture. Such was the military might of Babylon at the time of Esther. The intention of such large scale deportation was probably to vanquish any chance of national pride & to effectively submerge one people into the general “pool” of humanity that made up the Babylonian nation.

A brief Historical Time Line.
King Nebuchadnezzar of Babylon carried away into exile 3,023 eminent Hebrews, including the king with his family and officers and a large number of warriors, persons of note and artisans, leaving behind only those who were poor and helpless. This was the first general deportation to Babylon. Ezekiel goes to Babylon. 598 BC

Second general deportation of Jews by Nebuchadnezzar. 588 BC

The last and final deportation. 582 BC

Cyrus the Great conquers the Medes, founds Persian empire. 550 BC

Babylon was captured by Cyrus. 539 BC

Second temple completed in Jerusalem. 515 BC

Ezra leads another group of Hebrews back to Jerusalem. 458 BC