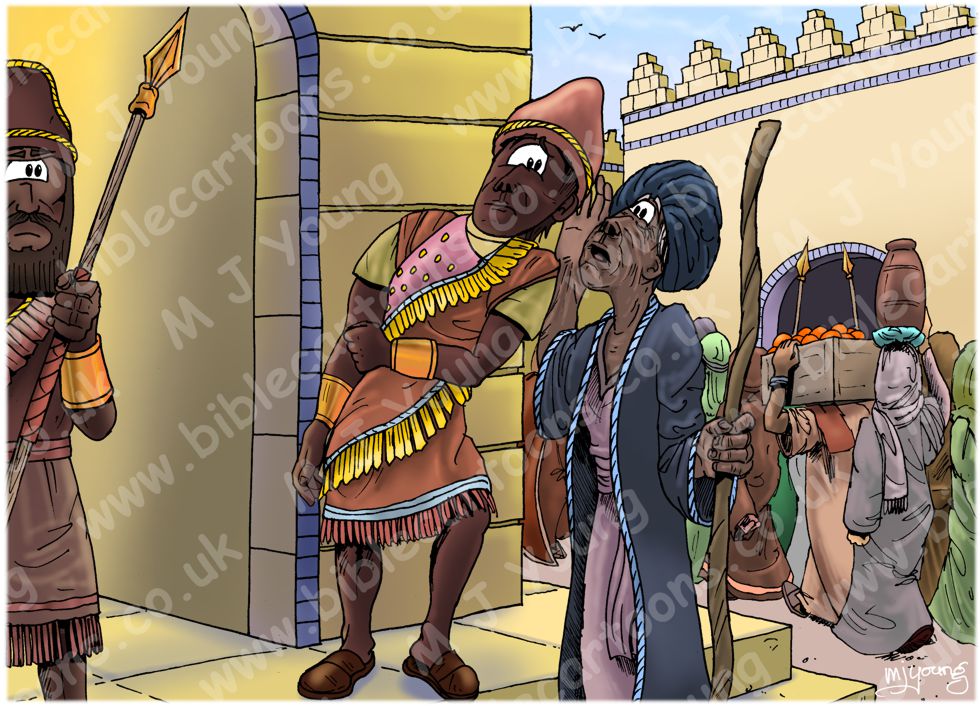 Esther 4:4-9 (ANIV)
4 When Esther’s maids and eunuchs came and told her about Mordecai, she was in great distress. She sent clothes for him to put on instead of his sackcloth, but he would not accept them. 5 Then Esther summoned Hathach, one of the king’s eunuchs assigned to attend her, and ordered him to find out what was troubling Mordecai and why. 6 So Hathach went out to Mordecai in the open square of the city in front of the king’s gate. 7 Mordecai told him everything that had happened to him, including the exact amount of money Haman had promised to pay into the royal treasury for the destruction of the Jews. 8 He also gave him a copy of the text of the edict for their annihilation, which had been published in Susa, to show to Esther and explain it to her, and he told him to urge her to go into the king’s presence to beg for mercy and plead with him for her people. 9 Hathach went back and reported to Esther what Mordecai had said.

LIGHTING NOTES:
There are two sources of light in this scene. The bright white/yellow sun is high in the pale blue sky, illuminating the whole scene & casting faint shadows in the foreground area. There is a unseen yellow/orange torch light glow coming from the tunnel behind the guard on the left of the scene.

CHARACTERS PRESENT:
Mordecai whispering his message into the ear of Hathach the eunuch, who is bending his knee in order to hear the message.
There is a guard with spear in hand, on the left of the scene.
Various people carrying goods & going to & fro in the “open square of the city in front of the king’s gate.”

RESEARCH/ADDITIONAL NOTES:
During my research about Mordecai I came across the interesting idea that he may have been a eunuch. You can read part of the article dealing with the “for’s” & “against’s” of this idea below (see [1].)

I decided that the arguments for Mordecai being a eunuch were sound, & the last sentence in the article really makes sense to me, “It would surely have looked very strange for a bearded man to be hanging around outside the palace and harem.” That makes a lot of sense to me! I therefore decided to make Mordecai an unbearded man. Notice that he is also rather old, & that I have indicated that with wrinkles & lines on his skin. Similarly we know that Hathach was a eunuch (see Esther 4:5) & so I have made him unbearded also.

Who was Mordecai?
The son of Jair, of the tribe of Benjamin.
He resided at Susa, the metropolis of Persia. He adopted his cousin Hadassah (Esther), an orphan child, whom he tenderly brought up as his own daughter. When she was brought into the king’s harem and made queen in the room of the deposed queen Vashti, he was promoted to some office in the court of Ahasuerus, and was one of those who “sat in the king’s gate” (Esth 2:21).
(Source: Illustrated Bible Dictionary: And Treasury of Biblical History, Biography, Geography, Doctrine, and Literature.)

His [Mordecai’s] great-grandfather, Kish, had been carried to Babylon along with Jeconiah, king of Judah (Esther 2:5-6). For nearly 60 years before the scenes narrated in Esther, in which Mordecai was greatly concerned, took place, the way to Palestine had been open to the Israelites; but neither his father, Jair, nor afterward himself chose to return to the ancient heritage.
(Source: The International Standard Bible Encyclopedia.)

[1]
J. Stafford Wright (1970) has suggested that Mordecai himself might have been a eunuch, because no wife or family are mentioned related to him (cf. Est 2:7) and because he had such easy access to the women’s quarters, to see how Esther was doing (2:11).105 In fact, we are told repeatedly that Mordecai sat “at the king’s gate” (2:19, 21; 3:2–3; 4:2, 6; 5:9, 13; 6:10, 12) and he was even known by the king as one “who sits at the king’s gate” (6:10), which probably referred either to the main entrance to the royal complex or more specifically to the king’s residence, both important posts.106 Two others who “guarded the threshold” here are specifically described as “eunuchs” (2:21); and “keepers of the door” leading into the palace or the harem, from the time of Cyrus on, had routinely been eunuchs (Cf. Xenophon, Education of Cyrus 7.5.65).
Robert Gordis (1976) suggested that perhaps Esther had the king appoint Mordecai to this position so that he could be near the harem;107 however, the Biblical text implies that Mordecai was already sitting at this gate before Esther was installed as queen (2:17–19). Gordis also suggested that Mordecai may have been appointed as a judge to dispense justice at the royal gate, but this is speculative (Bush).108 What we are told simply, over and over, is that Mordecai sat with other guards at the King’s Gate, but without calling him either a “guard” or a ”eunuch.” One explanation may be that castration was so repulsive to the Jews that the author of Esther simply could not mention the fact that Mordecai was a eunuch, or even label him a doorkeeper, which would point to him as being a eunuch. It would surely have looked very strange for a bearded man to be hanging around outside the palace and harem.