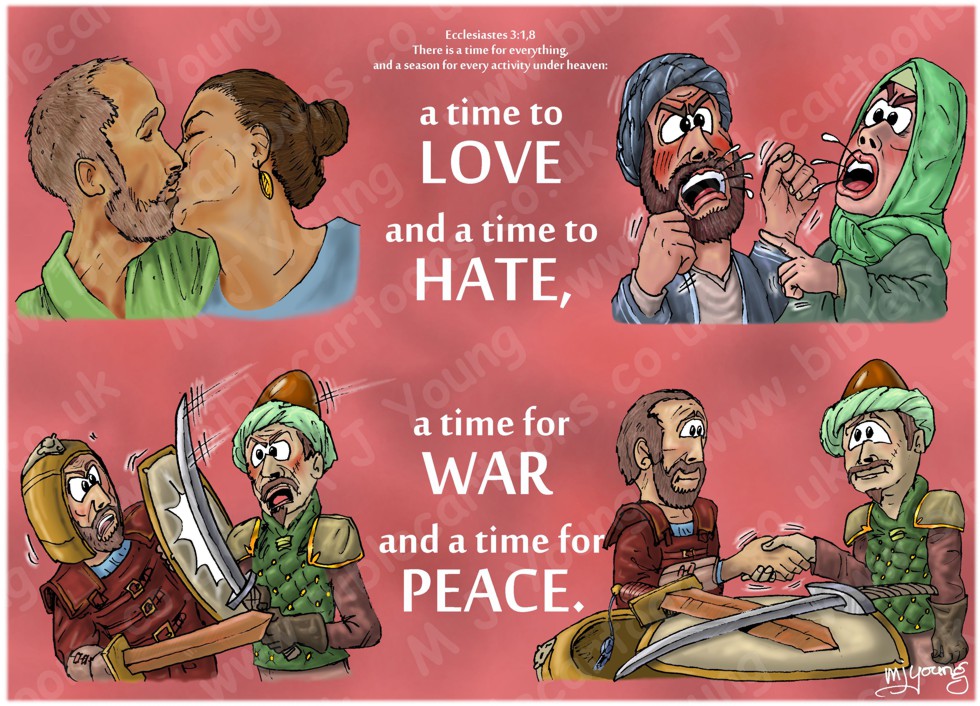 Ecclesiastes 3:1,8 (ANIV)
1 There is a time for everything, and a season for every activity under heaven:

Love, Hate, War, Peace.
Now to the particulars: verse 8 – “a time to love and a time to hate, a time for war and a time for peace” the polar opposites in this verse are loving & hating, war (or fighting) & peace.

In the Message bible it says “A right time to love and another to hate, A right time to wage war and another to make peace.” It makes the point that there is a “right” or correct time for all these activities. So the first pair of polar opposites are comparing love & loving with hating (though not necessarily open conflict or physical hurting). The second pair are comparing war (fighting, conflict, deliberate going to war) with making peace.

To illustrate the first two polar opposites I have drawn an older man & woman kissing, in the top left corner, compared to a red-faced, shouting man & woman, arguing & appearing close to coming to blows in the top right.

The second pair of polar opposites “a time for war and a time for peace” are in the bottom left & right of the picture. The first shows two men in armour with swords, fighting. The man on the right is sort of oriental looking & is bashing his scimitar sword against the other man’s shield! I decided to have the same two men represent peace in the bottom right. Notice they have laid down their weapons between them & are shaking hands, which is a symbolic act of peace & agreement.

King Solomon closed his list of polar opposites (in verse 8) by referring to life’s two basic & possibly strongest emotions, love and hate. I suppose the ultimate external expressions of these states is war (the most hostile expression) and its opposite, peace. It might be significant that the poem ends, as it began, with a set of opposites (war and peace) over which a person has little personal control.