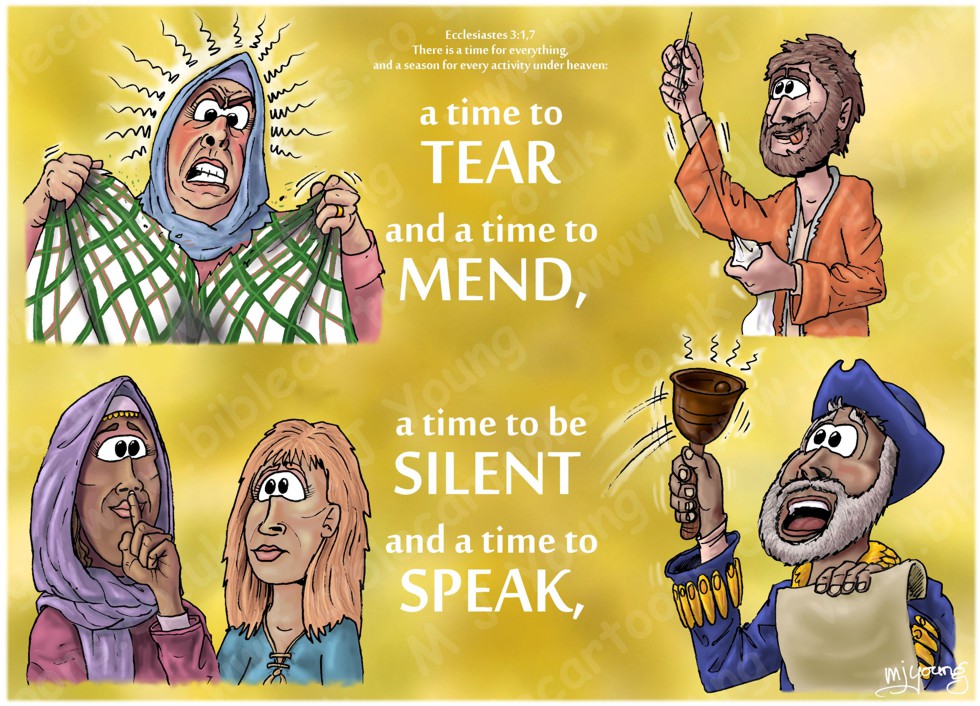 Ecclesiastes 3:1,7 (ANIV)
1 There is a time for everything, and a season for every activity under heaven:

Tear, Mend, Silent, Speak.
Now to the particulars: verse 7 – “a time to tear and a time to mend, a time to be silent and a time to speak, …” the polar opposites in this verse are tearing (ie ripping something apart) & mending (repairing something), silence (ie not speaking) & speaking (conversing, communicating with words).

To illustrate the first two polar opposites I have drawn an irrate looking woman tearing a piece of fabric, in the top left corner, compared to a man using a needle & thread in the top right. I enjoyed creating the tartan pattern on the cloth the angry looking woman is ripping up. Notice the sewing man’s tongue sticking out of his mouth as he concentrates!

The second pair of polar opposites “a time to be silent and a time to speak, …” are in the bottom left & right of the picture. The first shows a woman in a head scarf holding her finger to her lips – a universal symbol of silence. The opposite is seen in the bottom right, with the man in blue & gold, ringing a bell. I imagine he is a town crier (announcer) who is holding up a piece of parchment & shouting his news to all in ear shot.

It is difficult to deduce exactly what King Solomon had in mind with these phrases. This verse may refer to actions associated with mourning, since the Bible records many instances of people tearing their clothing as a sign or symbol for their grief. King David tore his clothes in grief in 2 Samuel 1:11-22 when he heard of King Saul & Jonathan’s death *1. See Job 2:12, which tells of Job’s three friends tearing their robes in grief & throwing dust onto their heads. In this story we also see the connection between tearing one’s clothes & remaining silent.
Tearing one’s clothes was also an expression of great anger, as when the high priest questioned Jesus upon his arrest – see Matthew 26:63-65 *3. It is interesting to note that even in this action, the high priest in Jerusalem was breaking the law, since tearing his clothes in mourning was forbidden for the high priest, since the time the Lord God forbade Aaron from doing so when his two eldest sons died in the tent of meeting (see Leviticus 10:1-7 *5).

The end of mourning & grief could be represented by sewing one’s clothes back together again, and by speaking out once more, as in the top & bottom right of the picture.

Bible References
*1
2 Samuel 1:11-12 Amplified Bible (AMP)
11 Then David grasped his own clothes and tore them; so did all the men with him. 12 They mourned and wept for Saul and Jonathan his son, and fasted until evening for the Lord’s people and the house of Israel, because of their defeat in battle.

*2
Job 2:12-13 Amplified Bible (AMP)
12 And when they looked from afar off and saw him [disfigured] beyond recognition, they lifted up their voices and wept; and each one tore his robe, and they cast dust over their heads toward the heavens.
13 So they sat down with [Job] on the ground for seven days and seven nights, and none spoke a word to him, for they saw that his grief and pain were very great.

*3
Matthew 26:63-65 Amplified Bible (AMP)
63 But Jesus kept silent. And the high priest said to Him, “I call upon you to swear by the living God, and tell us whether you are the Christ, the Son of God.”
64 Jesus said to him, “You have stated [the fact]. More than that, I tell you: You will in the future see the Son of Man seated at the right hand of the Almighty and coming on the clouds of the sky.”
65 Then the high priest tore his clothes and exclaimed, He has uttered blasphemy! What need have we of further evidence? You have now heard His blasphemy.

*4 Leviticus 21:10 Amplified Bible (AMP)
10 But he who is the high priest among his brethren, upon whose head the anointing oil was poured and who is consecrated to put on the [sacred] garments, shall not let the hair of his head hang loose or rend his clothes [in mourning],

*5
Leviticus 10:1-7 Amplified Bible (AMP)
1 And Nadab and Abihu, the sons of Aaron, each took his censer and put fire in it, and put incense on it, and offered strange and unholy fire before the Lord, as He had not commanded them. 2 And there came forth fire from before the Lord and killed them, and they died before the Lord.
3 Then Moses said to Aaron, This is what the Lord meant when He said, I [and My will, not their own] will be acknowledged as hallowed by those who come near Me, and before all the people I will be honored. And Aaron said nothing.
4 Moses called Mishael and Elzaphan, sons of Uzziel uncle of Aaron, and said to them, Come near, carry your brethren from before the sanctuary out of the camp. 5 So they drew near and carried them in their undertunics [stripped of their priestly vestments] out of the camp, as Moses had said.
6 And Moses said to Aaron and Eleazar and Ithamar, his sons [the father and brothers of the two priests whom God had slain for offering false fire], Do not uncover your heads or let your hair go loose or tear your clothes, lest you die [also] and lest God’s wrath should come upon all the congregation; but let your brethren, the whole house of Israel, bewail the burning which the Lord has kindled. 7 And you shall not go out from the door of the Tent of Meeting, lest you die, for the Lord’s anointing oil is upon you. And they did according to Moses’ word.
[Emphasis added by MY]