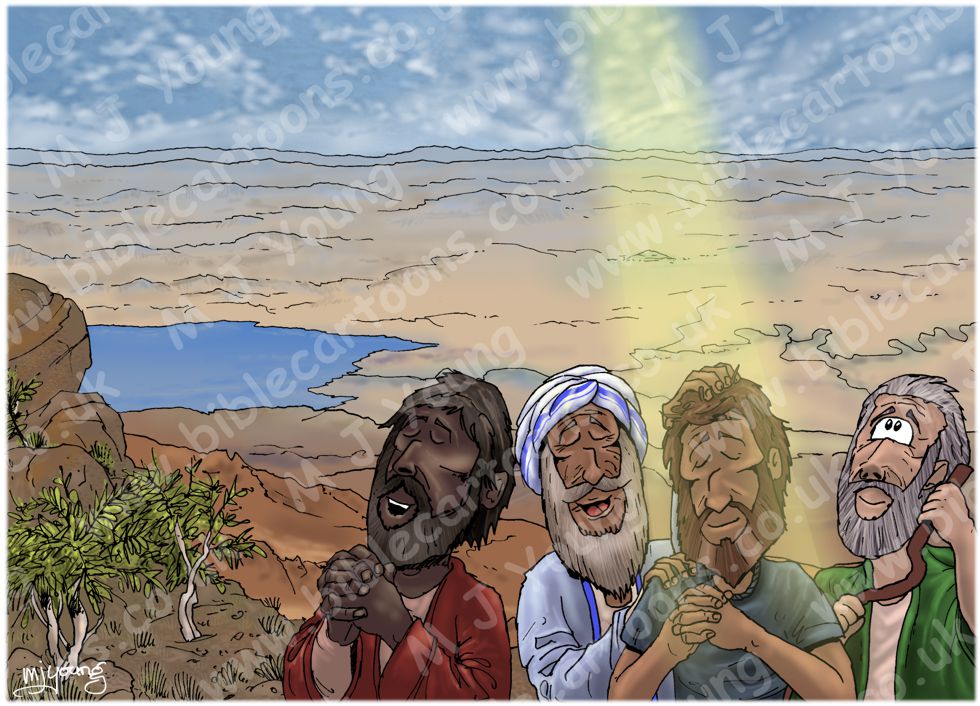 Deuteronomy 34:9-12 (ANIV)
9 Now Joshua son of Nun was filled with the spirit [1] of wisdom because Moses had laid his hands on him. So the Israelites listened to him and did what the Lord had commanded Moses. 10 Since then, no prophet has risen in Israel like Moses, whom the Lord knew face to face, 11 who did all those miraculous signs and wonders the Lord sent him to do in Egypt—to Pharaoh and to all his officials and to his whole land. 12 For no-one has ever shown the mighty power or performed the awesome deeds that Moses did in the sight of all Israel.

TIME OF DAY:
I have set this scene at mid day

LIGHTING NOTES:
The sun is overhead in this scene, we can see a sun beam coming from heaven & illuminating Joshua, Moses assistant.

RESEARCH/ADDITIONAL NOTES:
This scene was commissioned by a sports ministry company. It shows Moses placing his hands on Joshua’s head & shoulder & praying for an impartation of God’s spirit on to him. Deuteronomy chapter 34 & verse 1-8 inform us that these men had gone up onto Mount Nebo, & that after this ceremony, Moses had died on the mountain, just as the Lord had said he would. Verse 9 informs us that Joshua was filled with the spirit of wisdom because Moses had laid his hands on him. This was the way, in the Old Testament, that the spirit of God was transferred from one person (priest) to another. In the New Testament (following Old Testament prophesy to that effect) God has poured out his spirit on all of his servants (Christians) rather than a select few.

Distance from Mount Nebo to city of Jericho is about 19 miles (30.5 km) heading West, North West. Jericho can be seen as a faint green lump in the landscape, about one third of the way down the picture, within the sun beam.

Distance from Mount Nebo to city of Jerusalem is about 31 miles (50 km) heading due West. That is directly in front of the viewer, but over the mountains on the horizon & so invisible.

Distance from Mount Nebo to Mediterranean sea is about 62 miles (100 km) heading West, North West. Also invisible, since it is over the horizon.

‘Moses went up on Mount Nebo as the Lord told him to do (3:27; 32:48-50). The top of Pisgah probably refers to a ridge extending from the summit of Mount Nebo. The places Moses viewed start in the north and follow to the south in a counterclockwise direction. Though one could not normally view the western sea (the Mediterranean) from Mount Nebo [because the highlands on which Jerusalem is built would block the view of the sea], perhaps Moses was supernaturally enabled by the Lord to do so (There the Lord showed him the whole land). Zoar (cf. Gen. 14:2; 19:22-23) may have been at the southern tip of the Dead Sea. God’s mention of the oath reminded Moses that even though he was not allowed to lead the people into the Promised Land God would still be faithful to His promise to the patriarchs (Abraham, Isaac, and Jacob; cf. Deut. 1:8; 6:10; 9:5, 27; 29:13; 30:20) and bring Israel into her new land.’
(Source: The Bible Knowledge Commentary: An Exposition of the Scriptures by Dallas Seminary Faculty.)

Geology
The Geological maps of Israel reveal the area of Mount Nebo to be Limestone, dolostone, chert, marl. Looking at various people’s photographs from Google Earth & Panoramio, the limestone of the area is a pale grey or yellow colour, hence the colours you see in my artwork. 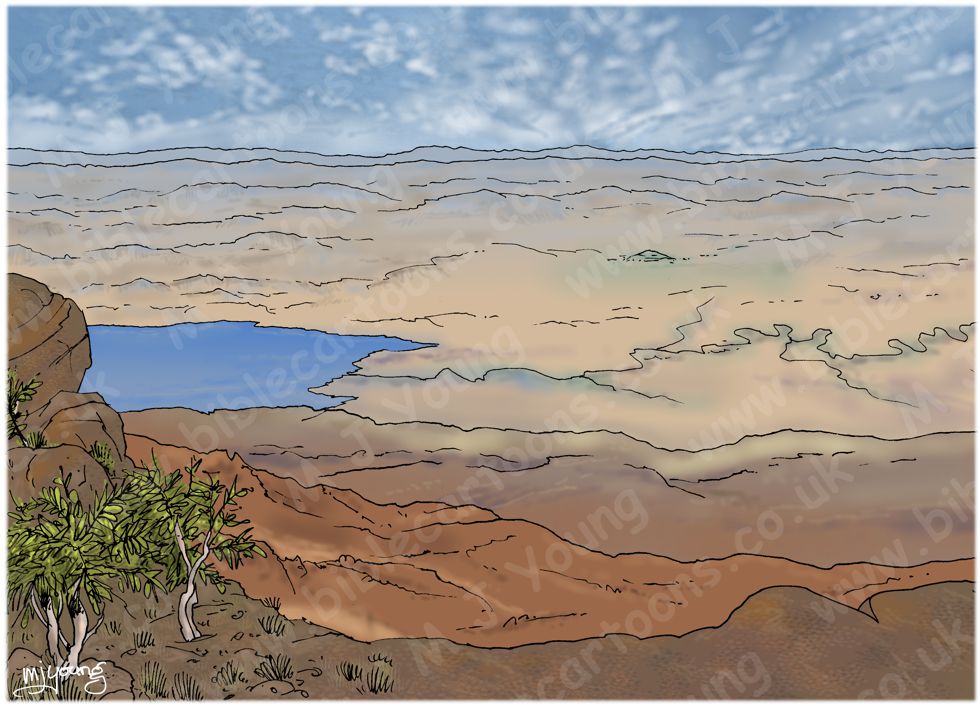 
Bible Doctrine Notes
34:9 HOLY SPIRIT, Leaders (1.33E)
The Holy Spirit gave Joshua the gift of wisdom: understanding, judgement and insight to lead Israel, rather than abstract knowledge. The danger of associating the Holy Spirit solely with power, is in making Him impersonal. He is the personal spirit who shares His wisdom with His people.
The laying on of hands was a means of giving a blessing (see Genesis 48:15-19). In this case it was also a sign that God had chosen Joshua to be Moses’ successor.

34:10-12 HISTORY, God’s Leaders (3.34C)
The Lord God employed human leaders in historical events to make Himself known to His people. The human leader also interpreted God’s actions to His people. God entrusted His revelation to human agents, so that other people could identify, trust and witness to it. Moses was the greatest example of an historical agent of revelation for the Hebrew people. Moses lead the people in the central event of the Old Testament revelation, the Exodus.

34:10 PRAYER, Personal (5.57A)
In Acts 3:22, the author quotes from Deuteronomy 18:15,18-19, where Moses says “The Lord your God will raise up for you a prophet like me from among your own brothers. You must listen to him”. Moses was the greatest Old Testament prophet; until Jesus the Christ superceded him in the New Testament. Jesus knew God in intimate prayer throughout his life on earth and showed us the face of God.