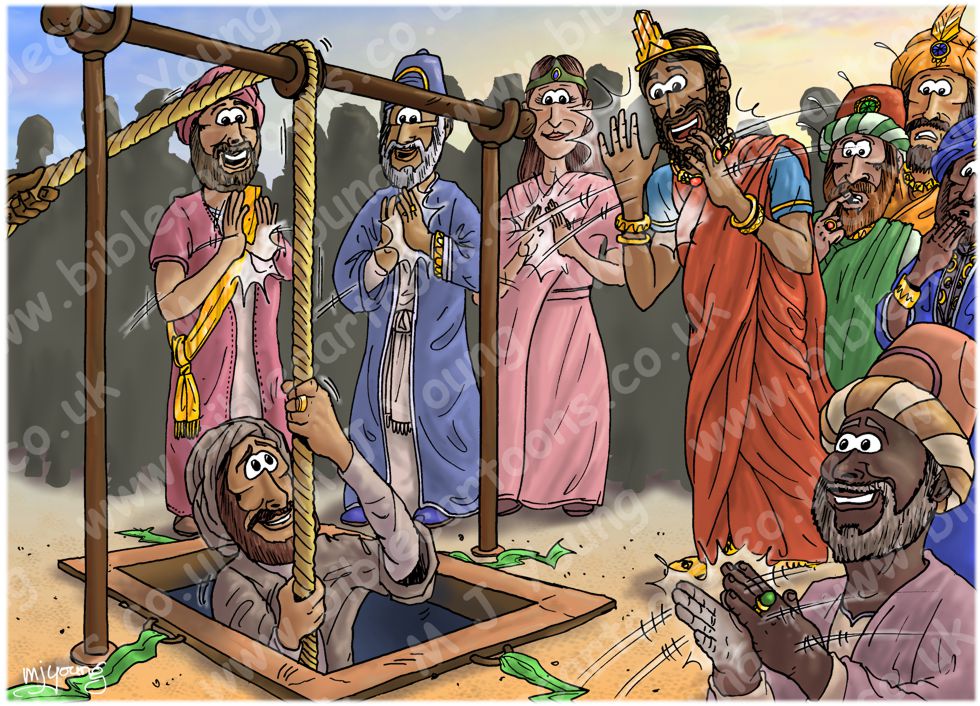 Daniel 6:23 (NLT)
The king [Darius the Mede] was overjoyed and ordered that Daniel be lifted from the den. Not a scratch was found on him, for he had trusted in his God.

TIME OF DAY:
The Bible text in verse 19 tells us it is “Very early morning”, so I have drawn the scene just after sunrise. This scene comes the day after scenes 01-10.

LIGHTING NOTES:
Pale early morning sunshine (seen in the background) illuminates this scene from the right, casting shadows to the left.

CHARACTERS PRESENT:
Daniel being lifted out of the lions’ den on a rope.
From left to right: two of the noblemen (in blue and pink robes respectively) seen in previous scenes. A woman courtier, King Darius (in red and gold robes) clapping madly! The three wicked administrators (in Blue, Gold and Green robes) can be seen, looking worried to the right of the king. In the foreground is a nobleman, unseen in any other scenes.

As in Scene 09 – Sealed stone, and Scene 11 – Were you rescued?, I have drawn a line of simple outline figures behind the main characters, representing a crowd of onlookers, nobles, the king’s courtiers, etc, in the background.

RESEARCH/ADDITIONAL NOTES:
I don’t often show people clapping, so that was novel to draw! The king and some of his noblemen and courtiers
are also joining in the celebration of Daniel’s survival. The three administrators (representative of lots more) we’ve seen in previous scenes are looking decidedly apprehensive.

The purpose of the mysterious hole (from Scene 08) explained.
You may have noticed a mysterious small hole in the ground by the opening to the lions’ den in Scene 09 – Sealed stone. In the scene above (Scene 13 – Daniel lifted out) you can see the purpose of that hole: it allows a vertical bronze bar to be inserted (two in fact, on either side of the hole in the ground) and another bronze bar to be suspended horizontally over the lions’ den aperture. A wheel in the centre of the horizontal bar feeds a rope down into the den, which allowed Daniel to be lowered (in Scene 08 – Into the den). In the scene above Daniel is being puled out of the den by means of the same mechanism.