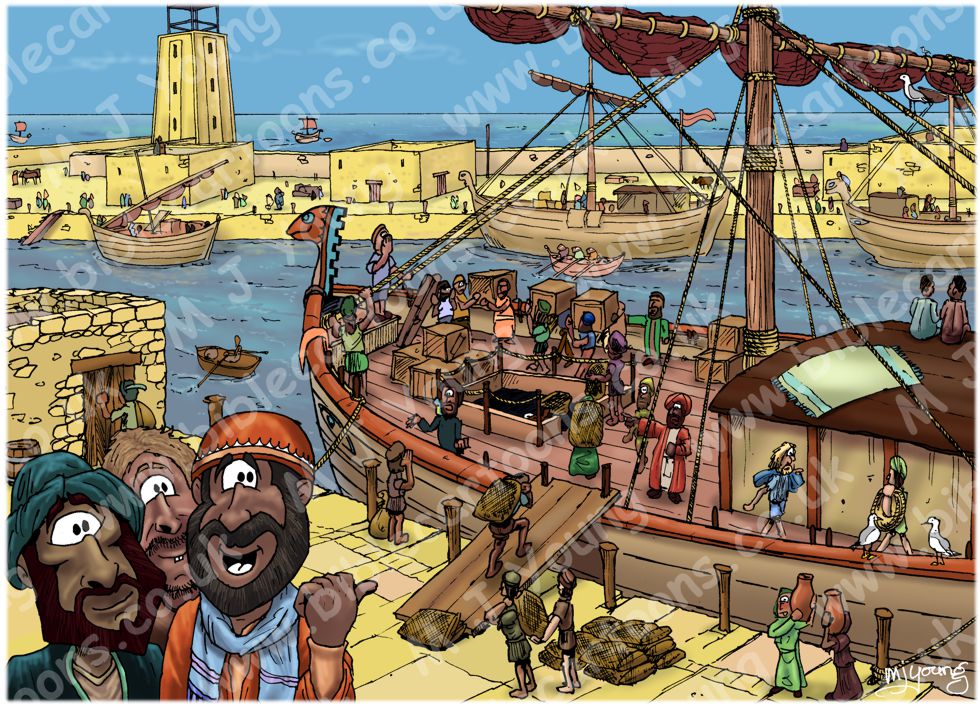 Acts 13:4 (NLT)
So Barnabas and Saul were sent out by the Holy Spirit. They went down to the seaport of Seleucia and then sailed for the island of Cyprus.

TIME OF DAY:
Unspecified in scripture.

LIGHTING NOTES:
This scene is set in the day time, but not at any specific time. There is simple one source lighting (from the sun) from above.

CHARACTERS PRESENT:
In the left foreground, from left to right are Saul/Paul, John Mark behind them & Barnabas, his uncle, in orange. Verse 5 tells us that John Mark went with Saul/Paul & Barnabas, as their assistant.

RESEARCH/ADDITIONAL NOTES:
Verse 1-3 of this chapter tell us that Saul/Paul & Barnabas were set apart by God the Holy Spirit for a particular work He wanted them to perform. The laying on of hands (in verse 3) was a symbolic act. The roots of this practice can be found in the Old Testament, where it was used to:
1) set someone aside for an office (Numbers 27:23)
2) bless someone (Genesis 48:14), or else
3) to dedicate something to God (Leviticus 1:4).

By laying hands on Saul/Paul & Barnabas the church at Antioch was identifying itself with them & with their mission. No doubt they asked for the Holy Spirit’s help, wisdom & guidance for these 2 men as well.

Where is Seleucia?
Seleucia was the seaport of the city of Antioch in Syria (now in modern day Turkey).
Note: there were many towns or cities called Antioch, so “Antioch in Syria” is the term used to describe this particular one.

Paul & Barnabas were in “Antioch in Syria” when they got the call to set out on their first missionary journey. The seaport of Seleucia was about 16 miles (26 km) west of the city.

‘The city’s harbor was one of the main reasons for the city’s existence. It consisted of an outer harbor protected from storms by an artificial mole that extended out from the shore. This outer harbor was connected by a channel to an inner harbor, expanded over the centuries into a huge basin, making it one of the largest in the Mediterranean and a major Roman naval base.’
(Source: DeeperStudy.com, Resources for Bible Students at all levels —— http://deeperstudy.com/link/seleucia_satellite.html)