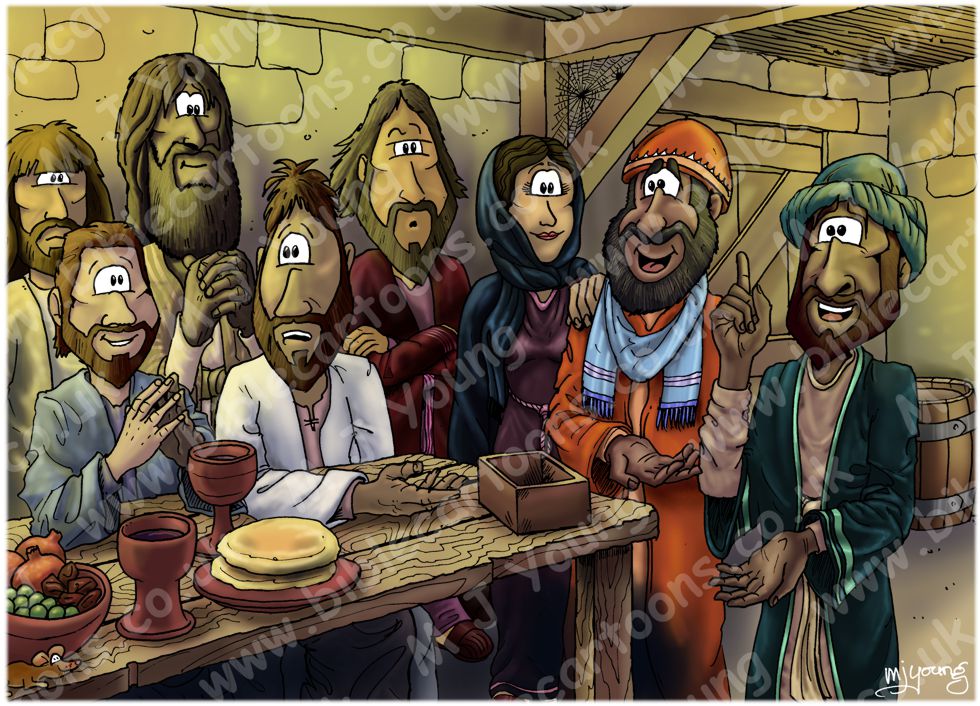 Acts 9:26-27 (NLT)
26 When Saul arrived in Jerusalem, he tried to meet with the believers, but they were all afraid of him. They did not believe he had truly become a believer! 27 Then Barnabas brought him to the apostles and told them how Saul had seen the Lord on the way to Damascus and how the Lord had spoken to Saul. He also told them that Saul had preached boldly in the name of Jesus in Damascus.

TIME OF DAY:
Unspecified in scripture.

LIGHTING NOTES:
There are two lamps or torches out of view, which cast yellow light onto the characters present. One is in the top left & the other in the middle right.

CHARACTERS PRESENT:
Saul (Aka Paul from Acts 13 onwards) is on the right of the scene, with Barnabas (in orange) gesturing towards him.
From left to right we can see James/Cleopas (son of Alphaeus), Andrew (brother of Simon/Peter) sitting in blue, with his hands together, Thaddeus/Judas (son of James), Simon/Peter sitting next to Andrew, Matthew (aka Levi) looking doubtfully at Saul/Paul! Mary Magdalene.

RESEARCH/ADDITIONAL NOTES:
All of the disciples I have drawn & coloured previously, so I used the same features & colouration as before. I have drawn Saul/Paul only once before, in the scene Acts 09 – Saul Paul conversion – Scene 01 – Light. And in that scene a strong beam of light is flooding the picture. I drew Saul/Paul in dark blue Pharisee clothing in that scene. In this present scene I wanted to show that Saul/Paul had taken a dramatic change of life direction, & to represent that change I have him wearing completely different clothing, of browns & greens. I took my time designing his features, hair & clothing since I will have to draw Saul/Paul many, many times as he is a major character of the New Testament!

The man standing next to Saul/Paul is a man named Barnabas. Actually that seems to have been a nickname, as Acts chapter 4 tells us that his real name was Joseph…

Acts 4:36-37 (ANIV)
Joseph, a Levite from Cyprus, whom the apostles called Barnabas (which means Son of Encouragement), sold a field he owned and brought the money and put it at the apostles’ feet.

I wanted his clothing to be fairly bright, almost “sun-shiny” to parallel his cheerful, honest, faithful nature. His clothing includes a blue neck scarf which I believe is the first time I have included that item of clothing on a man in my Bible Cartoons. The blue contrasts strongly with the orange tones to make quite a striking figure.

Both Saul/Paul & Barnabas were Jews who came from countries outside of Israel. We know that Saul/Paul was originally from Tarsus, a city of Cilicia (Acts 21:39; Acts 22:3), of the tribe of Benjamin (Philippians 3:5) & the above quotation from Acts 4 tells us Barnabas was a Cypriote.

I have placed several cups of wine & unleavened bread (made without yeast) on the rough table before the disciples, representative of the communion which Jesus the Christ initiated whilst he was with them.

Notice the little mouse on the left of the table, hiding by the bowl of fruit, added just for fun!