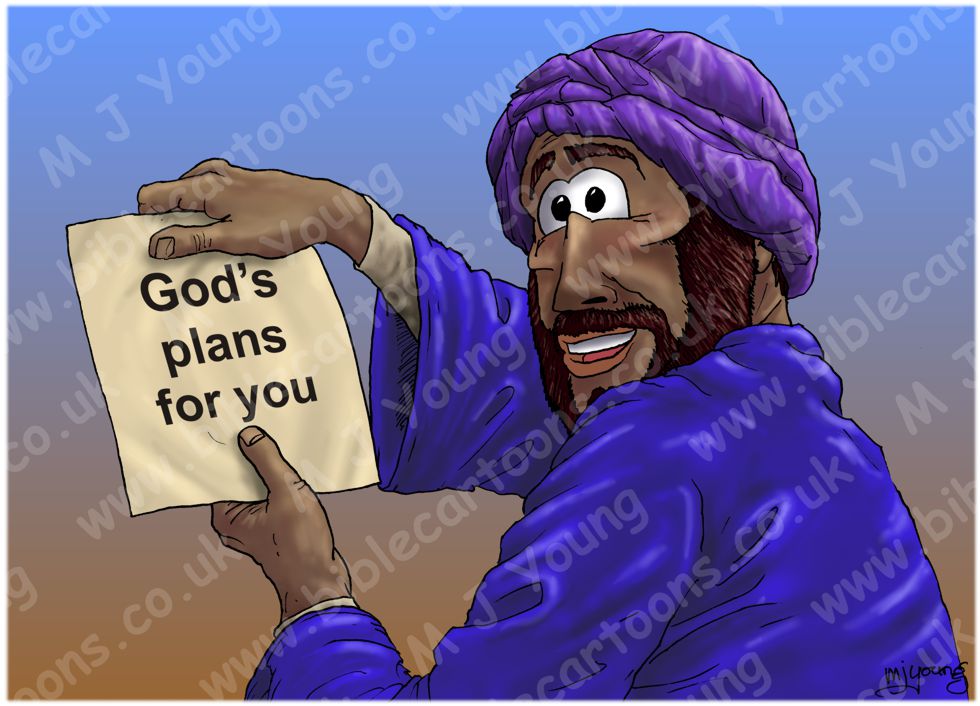 This picture was drawn for New Wine 2015 & shows Saul/Paul just after the brilliant light from heaven (v3) shines down on him & he hears the voice of Jesus.

I have kept the background very simple so as to focus attention on the figure of Saul/Paul.

This picture is one of the few Bible Cartoons that has English words included in the design. The idea was to show that God had plans for Paul’s life, which becomes very clear from reading Acts 09 verses 15-16…

15 But the Lord said [to Ananias], “Go, for Saul is my chosen instrument to take my message to the Gentiles and to kings, as well as to the people of Israel. 16 And I will show him how much he must suffer for my name’s sake.”

It should be noted that Saul/Paul actively co-operated with the plans the Lord Jesus had for him, which included his own suffering; the plans were not “forced” upon Saul/Paul! Indeed, we know from the writings of Paul himself how he viewed suffering for the Gospel’s sake: that it was necessary & that he suffered gladly for Jesus.

Colossians 1:24 New International Version (NIV)
24 Now I rejoice in what I am suffering for you, and I fill up in my flesh what is still lacking in regard to Christ’s afflictions, for the sake of his body, which is the church.

Colossians was Paul’s letter to the church at Colossae. In this passage he explains that his own suffering brings a benefit to the church in Colossae. That teaching is an “echo” of Jesus own suffering on the cross, which we know was his method of atoning for our sins & transferring them into his own body, so that we might be freed from our sins & given the right standing with God the Father which Jesus’ suffering created. Romans 5:1-2 makes this teaching clearer:

Romans 5:1-2 New International Version (NIV)
1 Therefore, since we have been justified through faith, we have peace with God through our Lord Jesus Christ, 2 through whom we have gained access by faith into this grace in which we now stand. And we boast in the hope of the glory of God.

Paul made the connection between his own weakness & God’s strength, when writing his 2nd letter to the Corinth church – 2 Corinthians 12.

2 Corinthians 12:7b-10 New International Version (NIV)
Therefore, in order to keep me from becoming conceited, I was given a thorn in my flesh, a messenger of Satan, to torment me. 8 Three times I pleaded with the Lord to take it away from me. 9 But he said to me, “My grace is sufficient for you, for my power is made perfect in weakness.” Therefore I will boast all the more gladly about my weaknesses, so that Christ’s power may rest on me. 10 That is why, for Christ’s sake, I delight in weaknesses, in insults, in hardships, in persecutions, in difficulties. For when I am weak, then I am strong.

Paul saw the purpose of his own suffering was a means to mediate (intervene between people in a dispute in order to bring about an agreement or reconciliation), manifest, and magnify the resurrection power of his Saviour Jesus the Christ.