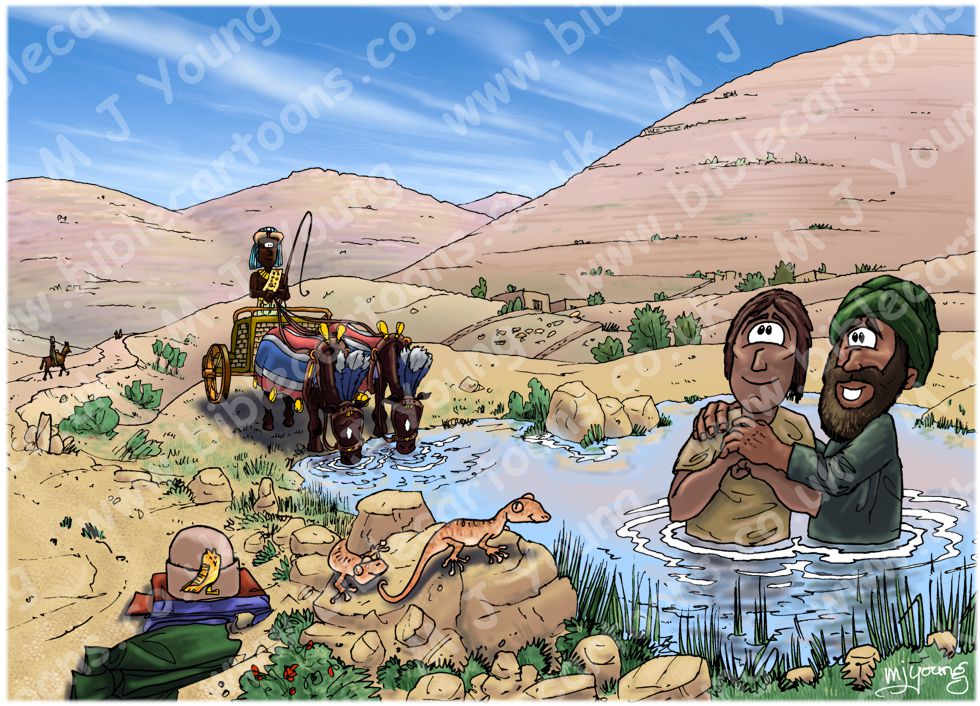 Acts 8:38 (NLT)
He ordered the carriage to stop, and they went down into the water, and Philip baptized him.

Notice the two Gecko’s chasing each other on the fore ground rocks. They are Sinai Fan Fingered Gecko aka Fan-footed Gecko (Ptyodactylus guttatus).

Where did the baptism take place?
My research points to a little village north of Hebron in southern Israel called Bethsur:

Jerome [1], in his Lift of Paula, testifies that a road from Jerusalem to Gaza went through Hebron. Paula travelled from Jerusalem to Bethlehem, which lay south of the city: ‘When she reached Bethlehem she quickened the pace of her horse, and took the old road which leads to Gaza. This road conducted to Bethsur (a little north of Hebron), where,’ says Jerome, while he read the Scriptures, the eunuch found the gospel fountain.’ This,’ adds Rammer, is the same Bethzur of which Jerome, in his Onomasticon, says, As you go from Elia to Hebron, at the twentieth milestone, you meet Bethsoron, near which, at the foot of a mountain, is a fountain bubbling out of the soil.
(Source: http://gluedideas.com/content-collection/cyclopedia-of-biblical-literature/Roads_P1.html)

Based on this research I decided to show the mountains of the region just north of Hebron, with a pond in the foreground, at the foot of the mountain as described above.