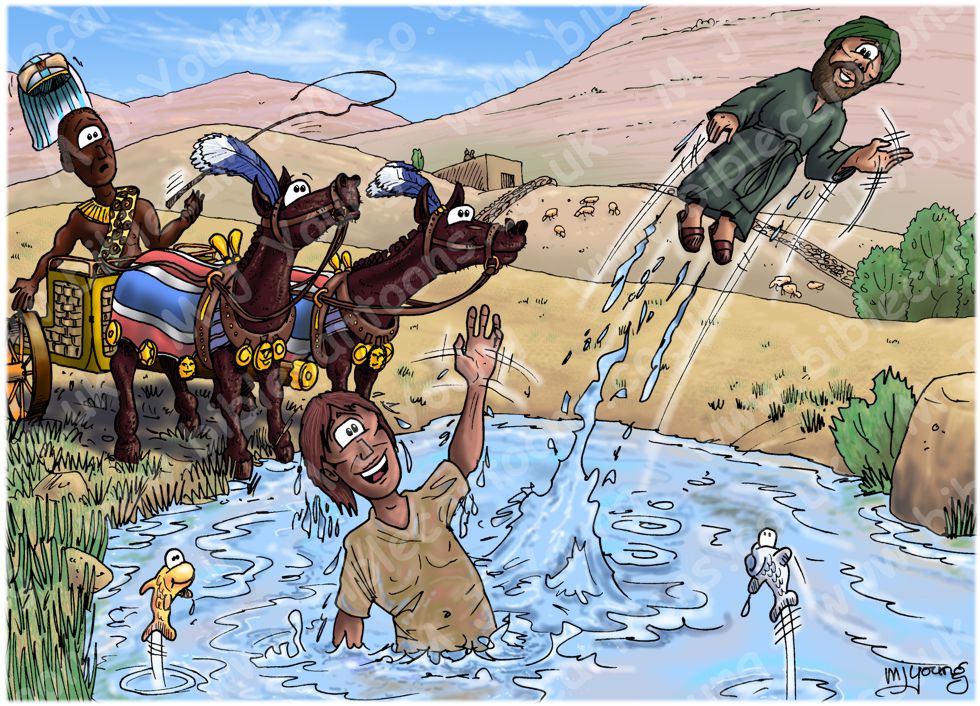 Acts 8:39 (NLT)
When they came up out of the water, the Spirit of the Lord snatched Philip away. The eunuch never saw him again but went on his way rejoicing.

RESEARCH/ADDITIONAL NOTES:
This scene is just after the eunuch’s baptism, with him & Philip having walked through the water to the further end of the pond. That’s why the chariot, horses & driver are larger in this scene than in the previous one, where they were further away. Notice also that the perspective of the background farm, sheep, walls & hills has changed, as a result of this movement.

Was Philip instantly transported by the spirit of God?
One commentator (Adam Clarke) sees no need to suggest a sudden, supernatural relocation of the apostle Philip. He suggests that Philip merely knew not to accompany the eunuch to Egypt, but rather went to his next assignment, which was in the city of Azotus (aka Ashdod). Other commentators [1] suggest a more supernatural transportation.

The language of Philip’s removal suggests sudden, supernatural movement, rather than flying. This kind of instantaneous transportation is mentioned in the Old Testament (see 1 Kings 18:12; 2 Kings 2:16; Ezekiel 3:12, 14) & New Testament (2 Corinthians 12:2).

In this scene, which is drawn for fun, we see Philip zooming away rather like a rocket!

In the next scene we see Philip having been instantly relocated, the lines representing his sudden vanishing.