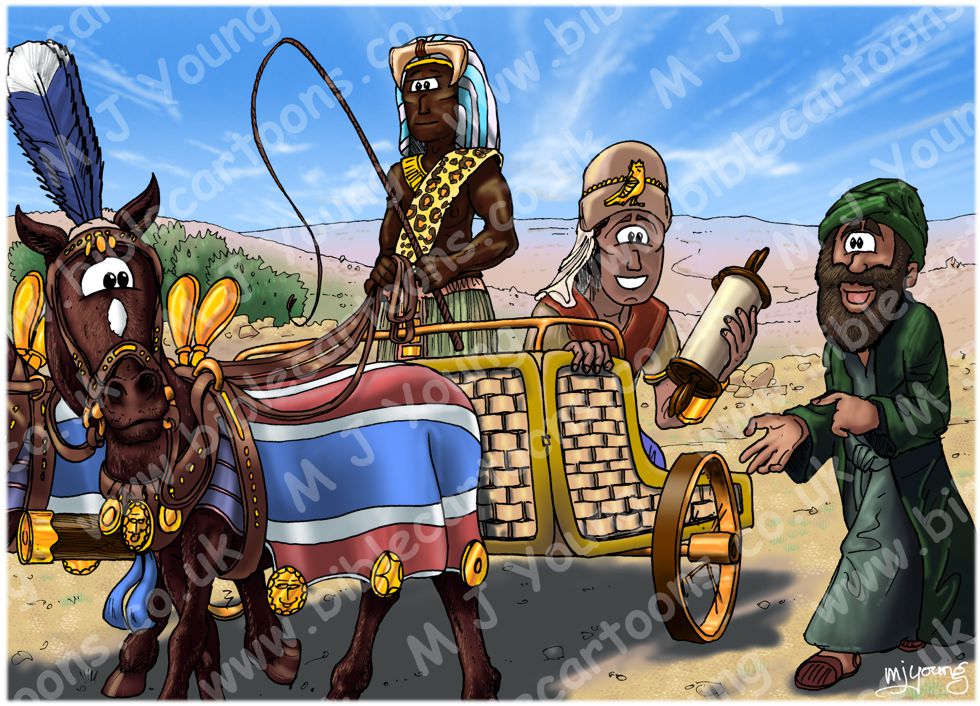 Acts 8:29-30 (NLT)
The Holy Spirit said to Philip, “Go over and walk along beside the carriage.” Philip ran over and heard the man reading from the prophet Isaiah. Philip asked, “Do you understand what you are reading?”

RESEARCH/ADDITIONAL NOTES:
A geological map of the area north of Hebron reveals the underlying rock types to be limestone, dolostone, marl, chalk & chert. I’ve coloured the rocks in these scenes pale yellow to reflect this. Photographs taken in the area confirm this colouration.

I have drawn the scroll the Ethiopian eunuch was reading consisting of a roll of prepared animal skin (papyrus reed paper or parchment has been used to prepare scrolls as well), attached to two wooden shafts. That way the reader could “fast forward” to the text they wanted to read by unrolling one end & winding up the other, until they got to the part they wanted to read. Even today, Hebrew people read the Torah from a scroll attached to two ornate wooden shafts in this way.

It was customary at this time in history for people to read aloud, thus Philip would have heard the portion of Scripture the eunuch was reading. Possessing a scroll of the OT Scriptures (handwritten and thus rare) also indicated the wealth & or high position of the Ethiopian eunuch.

“Ethiopia” here refers to ancient Nubia, the region from Aswan in southern Egypt to Khartoum, Sudan.

Various Bible translations describe the vehicle the eunuch was riding in as a carriage or chariot. I have chosen to show a two wheeled chariot, pulled by two horses.

I have shown the eunuch as a beardless man, though him being a eunuch may refer to his title rather than his condition.